Disease surveys across the Prairies are showing that pulse root rots, consisting of a complex of pathogens, are likely here to stay. With widespread infestations in pea crops from 2010 through 2013, pulse growers are being encouraged to look at the disease more closely.

In central Alberta, root rots became a serious problem during the summers of 2010 and 2011, but even in 2012, despite hot temperatures in July and August, root rot was a problem.

“It is generally accepted that it is the cool, wet weather that occurs during the seedling stage in May and June, and hot dry weather after the seedling stage, that has really affected the development of these root rots,” explains Chatterton.

Because of the increasing prominence of root rots of peas in central Alberta, Chatterton embarked on an expanded, intensive survey in 2013. Approximately 145 fields in central and southern Alberta were surveyed for root rot in peas, and initial results found 98 per cent of the fields had root rots. The survey also included a component that will identify the pathogens associated with the root rots and look for regional differences in pathogens. The analysis of the pathogens is ongoing.

Manitoba surveys have consistently found root rot in field pea crops. For example, in 2012 all 33 pea fields surveyed had root rots. Survey results for 2013 are pending. Saskatchewan surveys have found similar results. Particularly widespread infestations occurred in 2011 and 2012, and while 2013 had better growing conditions for pulses, root rot was still prevalent, especially in southeastern Saskatchewan on pea and chickpea.

Pulse root rots are caused by several different soil-borne pathogens. Disease severity is usually low to medium with patchy infestations in fields. The pathogens can interfere with nodulation and nitrogen fixation. Some experienced pea producers are seeing root rots at very high levels that have caused significant yield loss.

Ten to 20 years ago, the generally accepted thought was that root rot was mainly caused by Fusarium solani f. sp pisi, but research in Manitoba and North Dakota, and more recently in Alberta, is finding that more pathogens are involved.

In central Alberta, 80 per cent of the pathogens isolated from pea roots are F. avenaceum.  In testing, there were large variations in the aggressiveness of the F. avenaceum isolates, with some causing very little damage to roots and others causing complete root disintegration. Other pathogens also responsible for causing root rot include F. oxysporum, F. redolens, F. graminearum and Rhizoctonia solani.

In Saskatchewan in 2012, the first incidence of the pathogen Aphanomyces euteiches was reported. This pathogen causes aphanomyces root rot and can be very destructive. It usually occurs on cool and very wet soils.

Symptoms show up throughout the growing season
During the seedling stage, brown spreading lesions appear on the tap root, usually right under the seed where the root emerges. The lesion spreads down through the tap root and the same brown lesions spreading up to the crown. At advanced stages you get root decay of the entire tap root, and one of the telltale signs, especially of F. avenaceum infection, is a reddish-streaked root.

Late-season root rot, which is most common in Alberta, shows up as large yellowing patches. The patches usually start out as small brown patches, usually around flowering. The distribution is usually fairly random because of the soil-borne inoculum.

“Part of your field might look really brown but go over a few yards and it is nice and green. That is a good sign that it is root rot,” says Chatterton.

In advanced stages of the field, fusarium root rots can girdle the stem and cause increased lodging and stand collapse, which can make harvest more difficult. Yield losses are common but hard to measure because of the patchy nature of the infestation.

Most fusarium species produce long-lived resting spores in the field, which can usually survive three to four years in the soil. The spores are very good at resisting negative environmental conditions in the soil, says Chatterton, and because the pathogens are soil borne, they don’t spread much within a growing season.

“That is why when we see these environmental conditions with cool, wet springs and hot, dry summers that are stressing the plant, why we are likely seeing an increase in the disease,” says Chatterton. “Unfortunately, this is one of those diseases that once you have it, and see it in the field, there isn’t a lot you can do about it. No cultivars are resistant to the root rot pathogens. There are some that might have a low to moderate level of resistance, but usually that resistance can be overcome by high disease pressure that we are seeing in our soils.”

Plant breeders are working on developing resistance into pulse crops, but because of the multitude of pathogens the work is difficult and slow.

Crop rotation and seed treatment best control practices
A four-year break between pulse crops will help to reduce the inoculum load in the soil and minimize infections. All pulse crops, including dry peas, lentils and fababeans, should be avoided during the rotational break, because all pulses are susceptible to these root rot pathogens.

“There is a question of whether crop rotation is effective for F. avenaceum, because it is a broad spectrum pathogen that has been found on wheat roots and canola roots. However, it is the most aggressive on pea roots, so it is still good to practice crop rotations,” says Chatterton.

Using a registered seed treatment is the other key control measure. A seed treatment helps to ensure that a crop will get off to a good start, especially in cool, wet soils and on fields where inoculum is suspected. Preventing early season disease infestation will help to maintain a strong plant that can better resist later infections.

“We have seen good evidence that seed treatments are helping to prevent early infection, but there are mixed results on how effective they are against late-season root rots,” says Chatterton. “But definitely we recommend that if you are planting into a field with a history of root rot or poor stand establishment, you want to makes sure that you are using a seed treatment.”

Chatterton recommends a broad-spectrum seed treatment, preferably with dual modes of action so that the complex of pathogens is targeted. Also look for seed treatments that control Pythium spp., such as the fungicides with the active ingredient metalaxyl. Pythium root rots can weaken seedlings and make the plant susceptible to other root rot pathogens, so early control will help maintain a healthier pulse plant.

Using high-quality seed will also help to promote good crop stands that are better able to resist the disease. The pathogens seem to do better on compacted soils, so practices that encourage well-structured soils help to reduce the impact of the disease.

“The number 1 thing you can do for root rot is to manage the disease before seeding. You want to use cultural practices that enable pea plants to grow and remain as healthy as they can,” says Chatterton. “You want to give them a leg up so that they are not stressed.” 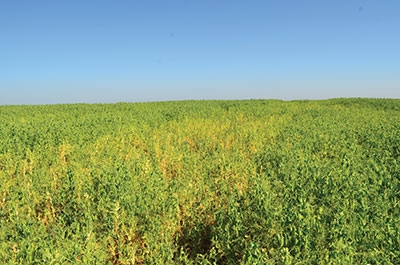 Late infestations of root rots show up as yellow patches across a field. Disease surveys across the Prairies are showing that pulse root rots