A quiet revolution in pest control is underway in labs in Canada and around the world. RNA interference (RNAi) is a natural, biological process by which RNA molecules suppress or “silence” genes targeted as threats. Discovered in the 1990s, RNAi technology has since become a research and development priority across the life sciences, with promising applications in antiviral therapy, cancer treatments and biotechnology.

The range of potential applications of RNAi in agriculture is extraordinary – the technology can be used to increase yields and improve agronomic performance; metabolic changes have been achieved in crops ranging from coffee to peanut to petunia. And RNAi shows great promise for pest and pathogen control. Using RNAi, researchers have achieved increased resistance to virus diseases, nematodes, bollworm, powdery mildew and leaf rusts in a range of crops.

“RNAi is going to be an unprecedented game changer,” says Curtis Rempel, vice-president of crop production with the Canola Council of Canada (CCC). “From the canola industry’s perspective, it’s a big priority, for a whole host of reasons. We’re keen to find out what can be done to control different insect pest species.”

The CCC is currently in talks with the entire canola value chain – life science companies, producers, handlers and crushers – to create public/private partnerships to develop RNAi for the canola industry.

“We think there needs to be a consortium around this,” Rempel says. “How will farmers benefit from the technology? How can we implement RNAi so it doesn’t stay as a journal article?”

Thus far, RNAi for pest control in Canada has mainly focused on crops such as corn and soy, but Rempel believes it has enormous potential for the canola industry as well.

In Canada, public research agendas are focused on applications of RNAi in control of malaria vectors, with life science companies such as Monsanto and Syngenta leading the way in developing RNAi for application in agriculture.

RNAi two ways
Monsanto has made RNAi a research priority since the 1990s, and has successfully applied RNAi technology for virus resistance in papaya and squash. Currently, Monsanto’s next generation corn rootworm product that will ultimately become part of the Smart Stax Pro product is under regulatory evaluation in the U.S. In Canada, a single event using RNAi that will become part of Smart Stax Pro – MON 87411 – is under review with the Canadian Food Inspection Agency (CFIA). Following approval of MON 98411, expected in December 2015, Monsanto will submit the Smart Stax Pro “stack notification” to CFIA.

RNAi can work in two ways for pest control in crops: plants can be genetically modified to “knock down” the expression of a target gene in an insect pest using RNAi, or topical applications of double-stranded RNA (dsRNA) can be administered to the plant exogenously – through a spray, for example.

In Monsanto’s corn rootworm product, a transgene has been introduced that results in the production of dsRNA molecules with a segment of the corn rootworm DvSnf7 gene sequence – genetic material that is present throughout the corn plant’s root tissue, where the rootworm feeds. “The level of dsRNA produced is not high – approximately one microgram DvSn7 dsRNA per kilogram of root tissue, or roughly a billionth of the mass of root tissue,”
explains Greg Heck, weed control team lead for Monsanto’s chemistry technology area.

When rootworm larvae consume the plant tissue, the dsRNA is taken up by the larvae’s gut proteins. “Once in cells the long dsRNA is processed to shorter pieces that are used by proteins to scan other RNAs for matches to the short RNA,” Heck explains. “If an exact match occurs, then the protein machinery cuts the target RNA in two and renders it non-functional.” When all 21 base pairs of the introduced RNA find a match, the worm’s cells begin to treat its own RNA like a virus, cutting it in pieces using a protein called Argonaute. The introduction of dsRNA results in destruction of specific RNA strands needed for normal growth, effectively killing the rootworm within a few days.

“The RNAi function is naturally present in the rootworm cells,” Heck says. “There, it is used to destroy viruses as well as remove the rootworm’s own RNAs that are no longer needed. If specificity were not part of the system, then the cell would mistakenly destroy needed RNAs. By providing the triggering RNAs via a transgene, we can program the cellular RNAi to go after an RNA of our choosing.”

When dsRNA is applied exogenously to a plant through a spray, it works in essentially the same way – target pests take up dsRNA when they feed on plant tissues. Monsanto is currently in the early stages of research and development of topical applications of dsRNA for potatoes, targeting Colorado potato beetle (CPB). “Earlier this year the CPB project advanced to phase 2 of product development,” Heck says.

Topical dsRNA sprays are years away from commercialization, but this approach offers a viable non-GE alternative that may see greater initial consumer acceptance.

Syngenta is also invested in RNAi as part of its portfolio of biocontrols. In 2013, for a price tag of $522 million, Syngenta acquired Devgen, a Belgium-based multinational biotechnology company that pioneered and licensed RNAi in nematodes in the late 1990s.

According to Luc Maertens, Syngenta’s RNAi platform lead based in Belgium, the company’s most advanced RNA-based biocontrol targets CPB in potato. Syngenta is also working on RNAi for soil pests in other crops. “Based on the successes on above ground soil pests, Syngenta has broadened its technology-focus to include soil pests, and finding solutions for scientific hurdles specific for the soil environment,” Maertens says. “That work is currently in an exploratory stage, and our research and development platform makes us uniquely placed to develop it.”

Stewardship is key
Like any pest control method, RNAi needs to be stewarded to ward off the development of resistance in target pest species. “Resistance has developed to major classes of pesticides, and we should not assume that RNAi will be an exception,” Maertens warns. “It is imperative to gain insights into probable resistance mechanisms to RNAi triggers in insects, to monitor possible resistance in the field, and to support the use of the technology with appropriate stewardship requirements.”

RNAi is not designed as a replacement for chemical controls, but rather as a unique mode of action that can help reduce chemical inputs in an integrated pest management system. And like any pest control option, its safety and utility in the long-term depends on careful stewardship.

Monsanto’s Smart Stax Pro product will express Bacillus thuringiensis (Bt) proteins as well as dsRNA designed to silence DvSnv7, and Heck says the combination of traits will mean greater control over the long-term. “Because multiple mechanisms of control are present, this will help to forestall the development of resistance in the corn rootworm population,” he says.

Safety and consumer acceptance
Maertens says one of the benefits of RNA-based biocontrol is that it employs new modes of action, providing a high degree of precision in pest control. It is highly selective for target pests, even between closely related species. “So far, our data has reinforced that it is safe for people, animals, non-targeted insects and the environment, making it a safe biocontrol option,” he says.

“When an insect consumes plant tissue, the dsRNA, applied as a biocontrol, or expressed by the plant, is taken up into the pest’s cells and triggers the RNAi process which stops the synthesis of the one, targeted essential protein in the target pest,” Maertens explains. “The biocontrol does not change, or have any effect on, the DNA of the pest. The process is highly selective for the target protein and pest because it is based on the RNA sequence which is unique for each protein. The pest’s cells start to die before the pest can cause too much damage to the crop.”

“The specificity of RNAi is a benefit,” Heck agrees. “This is considered when choosing a gene sequence for targeting the pest that is not found in non-target species. For example, the rootworm DvSnf7 sequence is not found in humans. Many natural barriers also exist in non-target organisms like fish, birds and mammals that prevent significant uptake from the environment.”

Heck says the specific sequence used in the corn rootworm product has been tested against more than 15 representative species that might encounter the dsRNA in the field, with no impact observed in the tests.

In a talk delivered to the Lower Mainland Horticultural Improvement Association in 2014, Agriculture and Agri-Food Canada (AAFC) researcher Guus Bakkeren outlined some of the potential applications of RNAi technology in agriculture. “An advantage of the RNA silencing technology is that it does not rely on the production of proteins to have an effect, thereby eliminating the chance of possible allergic reactions (in animals or humans),” Bakkeren said.

Bakkeren noted in his presentation there might be some fears that RNA silencing molecules linger in plants intended for consumption. “The human (mammal) gut is a very hostile place for small RNA molecules so these are not likely to survive there to cause unintended (adverse) effects,” he said. “However, more research needs to be done to study such possible effects.”

According to Rempel, early consumer acceptance of the technology will be key in Canada. “Having worked at Monsanto through the release of GMOs, I believe that more than ever there’s a consumer outreach piece,” he says. “Consumers have to feel safe and confident. Some of that is asking, ‘What are the real risks?’ and then understanding that we can’t turn our back on this technology for the wrong reasons.”

Rempel says public dollars should also be invested early on to drive innovation and allow Canada to keep up with its competitors.

“Public scientists working together with private companies can counteract that narrative that farmers are just being led to the trough. It’s a partnership,” he says. 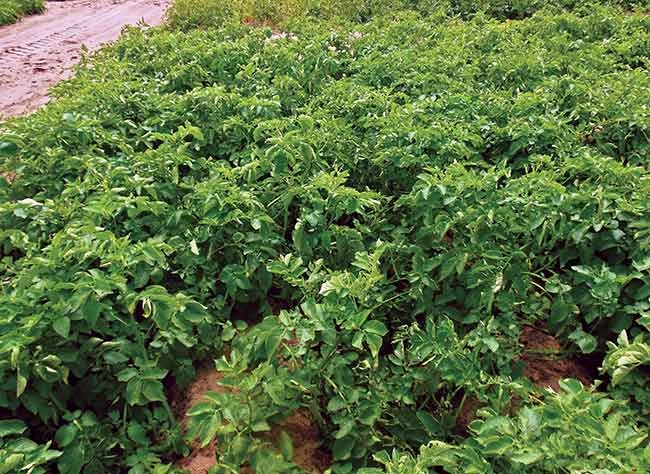 A plot treated with RNA-based biocontrol. A quiet revolution in pest control is underway in labs in Canada and around the world.