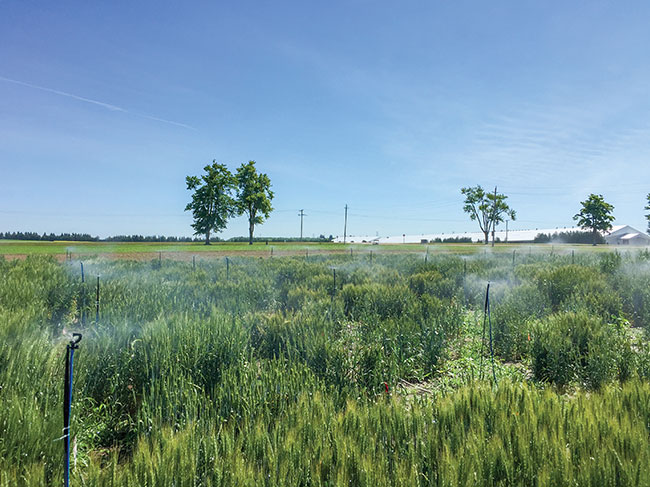 “Genetic resistance is the most cost-effective and environmentally safe method to control FHB. The focus of our program is to develop genetic FHB resistance while maintaining a high yield,” explains Mitra Serajazari, an adjunct professor at the University of Guelph. As a cereal pathologist, Serajazari has been involved in this wheat breeding program for seven years.

This program had its beginnings in 2013 and was formally established in 2014 through a partnership between the University of Guelph, the Grain Farmers of Ontario, and SeCan. It includes both winter and spring wheat breeding, but the main focus is winter wheat. The program was led by Dr. Alireza Navabi, who passed away last year. The university is in the process of hiring a new person to lead the program. In the interim, several of Navabi’s colleagues in the university’s plant agriculture department – Elizabeth Lee, Hugh Earl (the head of the department), Istvan Rajcan and Peter Pauls – have been providing guidance.

FHB resistance has been a key objective of the breeding program right from the start.

Although some Ontario winter wheat varieties are rated as moderately resistant to FHB, no variety is completely resistant. Serajazari explains some of the reasons why enhancing resistance to this fungal disease is so challenging.

Many different wheat genes are involved in these different types of resistance to the disease. Each of those genes contributes a little bit towards a wheat plant’s overall ability to fight FHB infection and toxin accumulation.

“Also, the process of gene pyramiding to generate a desirable combination of resistance genes in a single wheat variety with high yield is challenging. This cannot be simply achieved by conducting a single cross between two parents,” Serajazari says.

“Another complicating factor is that resistance to FHB is a quantitative trait that is controlled by the environment. Therefore, the progeny of a promising cross may exhibit different FHB resistance responses depending on the environmental conditions.”

A further complexity is that FHB can be caused by several different species of Fusarium. “The University of Guelph’s wheat breeding program focuses on Fusarium graminearum because it is the predominant species causing FHB in North America,” Serajazari explains.

“More importantly, this species produces DON, a mycotoxin that can contaminate food and feed. Therefore, our laboratory and field experiments are artificially inoculated with Fusarium graminearum.”

The program’s FHB nursery is located at the Elora Research Station. The nursery is vital for identifying breeding lines and varieties with superior resistance to the fungus. 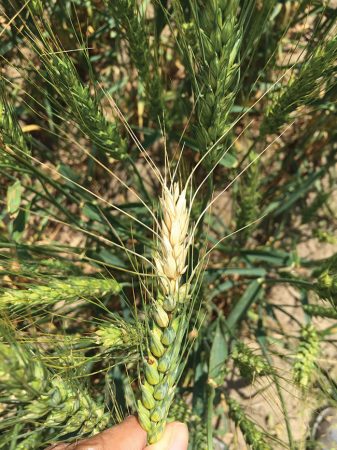 “Our nursery is equipped with an overhead mist irrigation system that maintains the humidity above 70 per cent for the optimal establishment of FHB. The FHB inoculum is sprayed three times: at two days before flowering, at flowering, and two days after flowering. This inoculum is produced in our laboratory. It is a mixture of three Fusarium graminearum isolates collected from across Ontario,” she explains.

“We measure disease incidence (the number of infected spikes in a plot) and severity (the amount of infection in the spike), and we use those measurements to calculate the FHB disease index. We also measure post-harvest traits, including the number of Fusarium-damaged kernels (FDKs) and the DON content, in our lab.”

The nursery is used for evaluating the FHB response in a wide range of winter and spring wheat varieties and breeding lines.

“In 2019, we screened over 2,000 winter wheat and 600 spring wheat varieties. These include the Ontario Cereal Crop Committee’s experiments to assess commercially available Ontario wheat varieties; the Canadian Winter Wheat Adaptation Trial to evaluate varieties from other regions to see if they are resistant across locations; and Advanced and Elite Yield Trials to assess breeding lines from the University of Guelph’s program. In addition, other germplasm resources are obtained from graduate student projects and collaborators across Canada.”

The breeding program’s team draws on a diverse array of wheat germplasm sources in the search for FHB resistance genes. In particular, they make use of the Canadian Winter Wheat Diversity Panel. This panel is a collection 450 modern and historic winter wheat samples obtained from across Canada. It was developed by Harwinder Singh Sidhu, a PhD student involved in the program. Work to characterize this collection included genotyping all the samples and assessing their FHB responses in the Elora nursery. Serajazari worked on the plant pathology component of this initiative.

The team is using the panel’s dataset to conduct genome-wide association studies (GWAS). Such studies involve comparing the genomes of many lines to look for small differences between their genomes. For example, researchers can determine how the genomes of susceptible lines differ from the genomes of moderately resistant lines.

Through this work, the team has identified various regions in the wheat genome that are associated with the different types of FHB resistance. Serajazari notes, “Breeders can use these FHB resistance-associated markers to develop new markers for resistance against type I (incidence), type II (severity) and types IV and V (DON content).”

Such markers are really helpful for screening breeding materials. For instance, when breeders are trying to pyramid several FHB resistance genes into their breeding lines, they can use the markers to determine which particular resistance genes are present in the progeny of the crosses.

The program’s team is also investigating the mechanisms of FHB resistance in wheat, which could help in developing winter wheat varieties with stronger FHB resistance in the future. “Our team is currently performing RNA sequencing to identify genes that are differentially expressed in highly resistant and susceptible wheat lines,” Serajazari explains. “Further development of this work will involve the generation of a population of recombinant inbred lines to determine locations along the genome that are involved in FHB resistance. Also, through our collaborations, we are involved in the analysis of protein profiles of FHB-resistant and susceptible lines to identify candidate proteins that regulate FHB resistance.”

All this work is contributing towards the development of winter wheat varieties with high yields and good FHB resistance – key traits for Ontario wheat growers.

The Grain Farmers of Ontario, the Ontario Ministry of Agriculture, Food and Rural Affairs, Genome Canada and the Canadian Wheat Research Coalition are funding this breeding work.