Wheat breeding has a long history in Canada, beginning in the late 1800s when researchers began looking at spring wheat varieties for Western Canada. The need at that time, in that region, was for an earlier maturing variety of wheat. 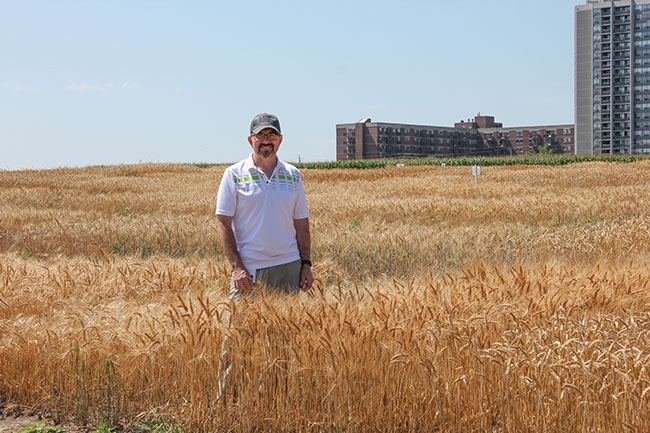 The answer then was Marquis which, says Agriculture and Agri-Food Canada (AAFC) wheat breeder Gavin Humphreys, “revolutionized wheat at the time and set the tone for all future wheat breeding in Canada.”

The program
Humphreys took over AAFC’s winter wheat breeding program in Eastern Canada in the spring of 2014, replacing the previous breeder, Radhey Pandeya, who was part of the team that registered Canada’s first Fusarium-resistant winter wheat variety in 2002. He arrived a year into the first phase of a five-year project initiated to develop HRWW varieties for Eastern Canada with funding from AAFC, the Grain Farmers of Canada and the Canadian Field Crop Research Association.

HRWW is a small class, only about 10 per cent of the winter wheat market, so it is less attractive to private breeding companies, says Humphreys. However, the HRWW class provides a valuable marketing alternative for Eastern producers who can deliver it directly to local mills for milling.

“In Quebec, some milling companies would like to source their hard milling wheat locally so they can market their products as locally produced. These are the producers and markets we are targeting.”

Phase 1
When Humphreys arrived, the program was very new with the breeders beginning to use material from Western Canada to make the first crosses. Because it was so new, there was a large learning curve for Humphreys to discover what would make good parents and who the key players were in the research.

The next step was to develop segregating populations and evaluate some of the advanced material from Western Canada to see if fit. “Unfortunately, it did not,” recalls Humphreys. “It did not grow well in Ontario.”

However, it was not wasted effort as they did find the material made very good parents, especially when addressing diseases like Fusarium head blight and yellow rust.

“The end-use product is also very good, so we have been able to improve winter wheat for Ontario using Western Canada material,” says Humphreys, explaining they have sent samples for bread wheat orthogonal testing for registration in Quebec and the Maritimes; so far nothing has been registered.

“But, we have developed a good pipeline,” says Humphreys. “The program is not mature but it is at the stage where we anticipate at the end of Phase 2 to produce lines for Ontario.”

Initial sites were in Ottawa and Harrow, Ont. At the sixth-generation stage, the program added sites in Quebec and Charlottetown attempting to determine what lines would be the best fit in terms of adaptability. The program is now in the first year of the second phase of funding from the Canadian Agricultural Partnership Program (CAP) through the wheat cluster.

The goal
Wheat, Humphreys says, is a widely grown crop, but it is not necessarily an easily adaptive crop. “It doesn’t travel well. When we moved varieties that performed well in Western Canada, we had issues with powdery mildew, which can cause up to 40 per cent yield losses.”

The photoperiod (daylength) requirements are different as well, which Humphreys believes is the reason Western winter wheat varieties are later maturing when grown in Eastern Canada compared to locally adapted varieties.

As a result, the Eastern breeders select for better resistance against the type of icing they see in Eastern Canada as well as for varieties that are resistant to powdery mildew and Fusarium head blight.

“We want varieties adapted to Ontario conditions so we are selecting based on where they are going to be grown,” says Humphreys. “We need to develop varieties best suited for the photoperiod here and winter survival.”

One surprise came from material attained from the International Maize and Wheat Improvement Center that allowed Humphreys to see germplasm from various parts of the world.

“I’m surprised at how well some of the material has done here, how widely adapted some of the international material is,” he says. “Nevertheless, if we focus mostly on diseases and not on other areas like straw strength and maturity, it is shocking what can go wrong. This reinforced my knowledge that we need to focus on all aspects: agronomics, maturity, straw strength, height, disease resistance and end-use quality.”

The future
Humphreys’ focus is on releasing one winter wheat variety for farmers that will endure. He gives AC Morley, which was released 20 years ago but is still used as a check variety today, as an example.

“If I can’t do that, I want to produce good germplasm so the person after me has good material,” he says. “I want to move new genes into the program.”

Humphreys believes the program is doing that and is indeed on track to deliver varieties at the end of the second phase of the wheat cluster funding.

“We have implemented DNA marker technology into the program that was not there before and introduced new genes for resistance of Fusarium head blight and powdery mildew that were not there before,” he says. “The next challenge is developing varieties that make half decent bread or can be when blended with other wheat varieties to make decent bread.”

Ultimately, the objective is to develop varieties in the near future so producers have HRWW varieties, if they want that option, and soft white winter wheat varieties that are better adapted to the Ontario environment, disease resistant and have better end-use quality so they can get a better price.

Humphreys is greatly appreciative of the funders’ continuing support to the research. “We need publicly funded plant breeding to continue,” he says. “It is important for the investment to continue to maintain Canada’s position as a world-class wheat producer and exporter.”