Jul. 13, 2012, Emmetsburg, IA - The most recent soil data from Emmetsburg, Iowa continues to demonstrate that harvesting crop residue can be a responsible part of good farm management.

The Project LIBERTY cellulosic ethanol plant in Emmetsburg – scheduled for completion in 2013 – will use corn cobs, leaves, husk and some stalk from area fields to produce renewable fuel. For the last four years, Project LIBERTY has commissioned soil sustainability work from researchers with Iowa State University and the U.S. Department of Agriculture. They have studied six different harvest methods in an effort to provide area farmers with data to help them make decisions about biomass harvesting.

The most recent data is consistent with previous years.

“Basically, at the removal level that POET-DSM recommends, there is no reduction in yield, and removal rates are well within the sustainability limits,” said Dr. Stuart Birrell with Iowa State University. Birrell and Dr. Douglas Karlen of USDA-ARS led the research.

POET-DSM contracts for about 1 ton of biomass per acre with participating farmers. That’s less than 25% of the available above-ground biomass. They are contracting for 85,000 tons this year, and once operational, Project LIBERTY will require about 285,000 tons per year.

“From the beginning we’ve said we would pay close attention to the data in determining our contracts with farmers,” said Larry Ward, Senior Vice President of Project Development at POET. “We’re clearly well within the limits of what the research says is responsible biomass harvesting.”

“As the new entrant to this endeavor we are pleased to embark on all previous work done by POET, Iowa State University, and the USDA already. This work seamlessly fits in our belief that we need to approach this new era of agricultural developments in a responsible way. Sustainable soil fertility will be the source to success in a bio-economy,” said Steve Hartig, vice-president Bio-Energy for DSM.

Birrell said nutrient replacement is minimal, with no evidence of a need to replace nitrogen. Based on the research, POET-DSM recommends to farmers the addition of 10-15 pounds of potash when soil tests indicate it is needed.

“The natural soil fertility and understanding of that fertility is far more important and has a greater effect on fertilizer recommendation rates than the relatively small amounts you’re taking off in stover harvesting,” Birrell said.

The effects of biomass harvesting on soil carbon have also proven to be minimal according to measurements of soil organic carbon, Birrell said, more an effect of yield and tillage intensity than biomass removal.

POET-DSM Advanced Biofuels, LLC, is a 50/50 joint venture between Royal DSM and POET, LLC. Based in Sioux Falls, South Dakota, the company is a cooperative effort of two innovators that provides a key to unlocking the opportunity of converting corn crop residue into cellulosic bio-ethanol. Built on the strengths of both companies the joint venture has a critical mission: to make cellulosic bio-ethanol competitive with corn ethanol, the most competitive renewable liquid transportation fuel on the US market today. Drawing on the deep expertise and experience of POET and DSM in different areas of converting cellulosic biomass into ethanol, POET - DSM Advanced Biofuels will have its first commercial-scale plant co-located with POET' Biorefining -- Emmetsburg in Emmetsburg, Iowa. Based on this plant the JV plans to globally license an integrated technology package for the conversion of corn crop residue to cellulosic bio-ethanol. More information: www.poetdsm.com 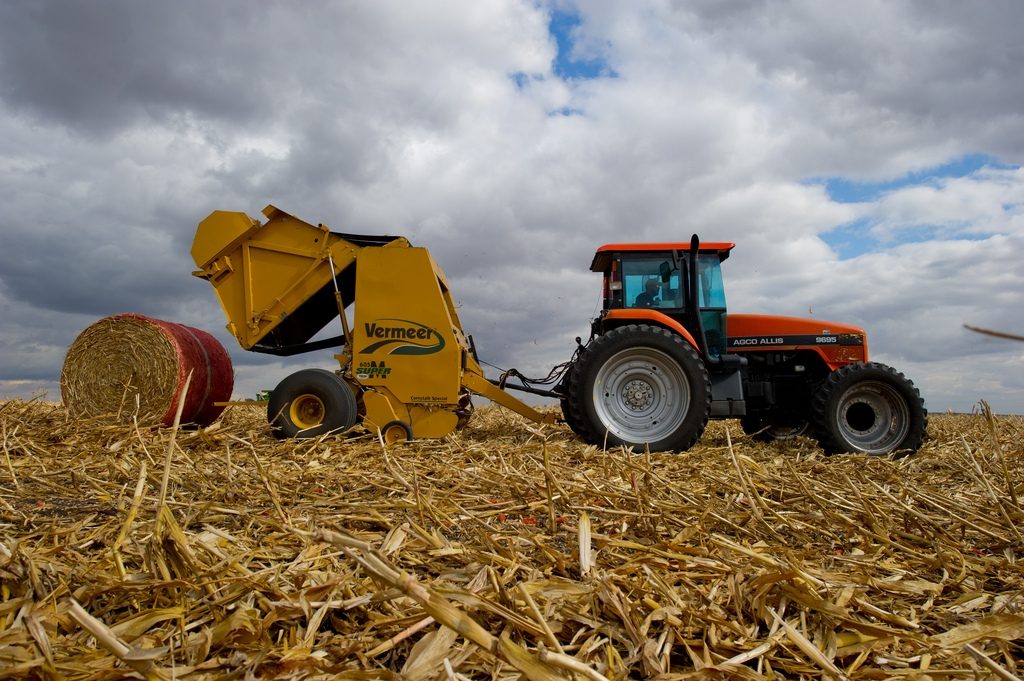 Baling corn cobs Soil sustainability work for Project LIBERTY with Iowa State University and the USDA ave shown that there is no reduction in yield over the past four years.