Features Agronomy Corn
Niger seed production is for the birds 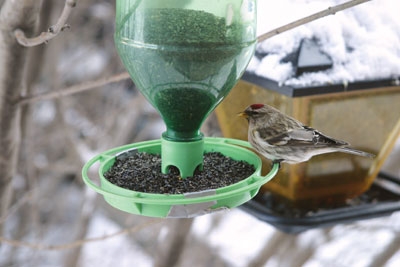 Researchers and a few growers in Saskatchewan are trialling a new niche oilseed crop for the bird food market. Niger seed (Guizotia abyssincia) is primarily grown in Ethiopia and India, where the seeds are used as a condiment or for other food uses, cold pressed as edible oil or exported into birdseed markets. As with any new crop, the biggest challenges are finding markets and meeting regulatory challenges.

Bill May, crop management agronomist with Agriculture and Agri-Food Canada (AAFC) at Indian Head, Saskatchewan, has been researching niger seed production for the past several years. “We looked at niger seed production as a niche crop that could be grown by an individual farmer or a group that would like to market bird seed into a wholesale or retail market,” says May. “Currently all of the imported niger seed comes through the US and is required to be heat treated to sterilize the seed to prevent noxious weeds problems.”

The seed must be treated at one of four existing USDA-approved heat treatment facilities, one in Ethiopia, one in India and two in the United States, in New Jersey and Maryland. The costs and logistics of accessing or developing a USDA-approved facility are currently a barrier to the market.

Niger seed is an open-pollinated crop that requires pollinators: either honeybees or leaf cutter bees. It is an indeterminate broadleaf crop with small yellow sunflower-type flowers that continues growing as long as it has moisture or until growth is stopped by dry conditions or frost.

“From a production standpoint, niger seed does perform fairly well in Saskatchewan,” notes May. “Our field plots over the past few years have produced average yields of 250 to 500 pounds per acre. Crop competitiveness and weed control are a production challenge.”

Niger seed is very small, and is seeded shallow at one-half inch seeding depth and a seeding rate of 5 lb./ac. “Niger seed is well suited to be grown in a no-till environment and should be seeded with a seeder with good depth control,” says May. “Niger is slow to start and not competitive early, which is why we will need good herbicide control. We do have good herbicides that will control kochia, cleavers and most of the other annual weeds. We do not have in-crop control for perennial weeds such as dandelion and Canada thistle, so these weeds will need to be controlled for two years prior in the fall.” May has developed a herbicide package for weed control for niger, and plans to move it to minor use registration.

“Our crop in 2012 was very competitive with weeds once it got started,” says May. “It normally grows about two feet high, but this year with all of the moisture it was closer to 4.5 feet high. The crop is usually swathed and combined, but cleaning the seed from the chaff and straw is a challenge, and something we are still trying to learn how to do properly.”

May is currently looking at adjusting nitrogen rates to improve crop competitiveness.

“Niger seed is a niche crop and requires effort to market it,” he adds. “It is definitely not a crop you want to grow 100 acres and try to find a way to sell it. Niger seed will be an option for a few farmers growing small acres, not big guys growing large acres, until we can get access to the US market. The birds definitely prefer live [non-sterilized] niger because it tastes better and keeps longer, which provides an advantage of locally grown over imported products.”

For Les Williams of Primrose Seed Cleaning Inc. in Glenavon, Saskatchewan, growing niger seed had a good fit with other specialty crops he produces on his 1100-acre farm.

“I started out with a couple of acres six years ago and then expanded our acreage up to as much as 20 acres one year,” says Williams. “It is not a hard crop to grow, and most modern seeding equipment can seed the small sized seed. In a way, growing niger seed is like growing conventional canola with options.”

From field observations, Williams notes that niger doesn’t require a lot of fertilizer. Applying too much nitrogen tends to make the crop produce a lot of biomass, but not much seed. “Harvesting is probably the trickiest part as the seed, chaff and straw weigh about the same and are difficult to separate in the field without losing too much seed,” notes Williams. “I usually collect as much as I can in the field and then deal with the cleaning at my on-farm plant. Harvesting is a big reason for keeping niger production on a small scale.”

He adds that niger doesn’t produce many volunteers, which is a relief to him and his neighbours. “Because niger has such a low tolerance to frost, volunteers rarely show up and if they do it’s usually just a few at the edge of the field,” he says.

“Another interesting thing we found is that birds don’t seem to bother the crop in the field. One year we had sunflowers, canaryseed and niger all in the same field, and the blackbirds decimated about 40 percent of the sunflowers and canaryseed, but didn’t touch the niger seed at all.”

Robin Gill and her husband Dale operate a mixed grain and cattle farm near Leader, Saskatchewan, and started growing niger about four years ago. “We feed wild birds on our farm, and I thought we should be able to grow niger,” says Dale Gill. “We started researching and connected with Bill May to start trialling some on our farm. From there, it has taken off and this year we grew about 10 acres.”

Weed control is a big challenge, and starting with clean seed is important to prevent compounding the weed problem.

Another challenge is harvesting and getting the combine set properly. “Also because it is a new crop, there isn’t a test available yet to determine when the crop is dry enough to combine or not,” notes Gill. “We also don’t have a seed cleaner, which makes it difficult to separate the chaff and straw out of the product.”

Marketing is the biggest challenge for both Williams and the Gills, and they emphasize that growers have to find their own markets. “For now, the markets are small and local, but if we could get a guaranteed supply, then we could look at trying to get into the chain stores,” says Williams. “I believe the market is there, we just have to crack into it. We can produce a product that is slightly different and better, and priced competitively against imported products.”

Williams markets most of the niger as bird seed to local area stores. He also sells seed to bird fancier clubs, who feed sprouted seed to baby birds and seed to adults. “One of the customers told me his adult birds do much better eating the live seed we produce as compared to the imported sterilized seed,” notes Williams. “The seed has an oil content of about 40 percent, which is more stable in live seed and of a higher quality. I’ve stored some of my live seed for over five years and it’s still viable. Most imported seed loses its quality after a year.”

Gill started marketing birdseed at the farmer’s market in Medicine Hat. “This provides a great opportunity to get to know people and find out what they are looking for in the product,” says Gill. “People love the product and are happy it is available. We also sell through the local hardware store and are looking at other farmers markets, and provide birdseed to the Medicine Hat Interpretive Centre.

“To make sure the birds like the product we’ve put bird feeders out on our farm and tested our product side by side with the imported,” he adds. “The birds always eat our fresh seed first and then will pick away at the imported product after that.”

Along with niger seed, Williams and the Gills have developed other mixes with sunflower, canaryseed and other crops they produce. They enjoy growing the crop and find that it has a good fit with other crops they grow.