Once optimized for the field, this cost-effective seed treatment is expected to increase the value of the seed package for growers. 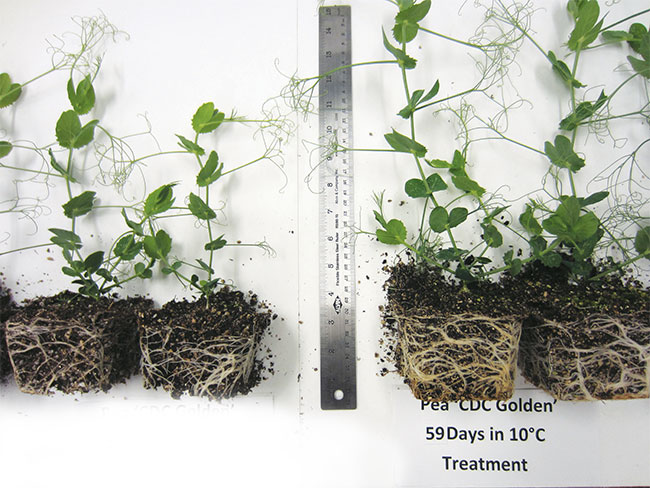 ABOVE: Seed treatments can provide multiple benefits to crops. Photo courtesy of rensong liu. Under controlled conditions of 10 C, a single application of seed treatment to pea (right) enhanced germination and provided for better rooting and shoot development, as compared to the control. Photo by Rensong liu, university of saskatchewan.

Researchers at the University of Saskatchewan have discovered and patented a novel seed treatment that induces early germination and root growth in crops, and shows significant commercial promise for growers. Improving early seed germination, seedling establishment and enhanced root development, particularly under low temperature stress, are all critical factors for increasing yield of field crops through advanced maturity and avoidance of heat and/or drought stress in mid-summer and fall frosts in Canada, and globally.

“This project evolved out of previous work led by Bernard Laarveld and Andrew Olkowski [from the department of animal and poultry science] who were investigating a plant biomass processing treatment to break down lignocellulose,” says Karen Tanino, professor and resarch scientist at the University of Saskatchewan’s Department of Plant Sciences. “They were testing the treatment on malting barley seed to determine if their treatment was toxic to the seed. Instead of being toxic, the treatment enhanced germination. They asked me if this type of treatment might be of interest to the plant agriculture industry and I immediately answered yes!’

“One of the critical factors contributing to the quality of malt is uniformity of malting barley seed germination, which is still a challenge and a priority for malting companies. Their initial project results showed a significant increase in both synchronization of the malting barley germination process and germination rate. These somewhat surprising results convinced us to further investigate the potential to expand the application of this novel seed treatment to a range of crops in field production.”

Tanino’s broader research program is focused on abiotic stresses of plants and takes an approach of avoidance to stress rather than tolerance. Therefore, the driving interest and objectives behind this project were to determine if a single seed treatment could advance germination under the cool low temperature conditions of spring, and to evaluate the impact on subsequent plant growth and development across a range of crops. This novel seed treatment, which is based on a known catalytic reaction (CAT) using a transition metal catalyst combined with H2O2, has been patented. More than 30 crops/cultivars were tested from cereals, pulses, oilseeds, forages, to horticulture crops under controlled conditions and greenhouse conditions at both optimum and low temperature conditions. Additional trials were conducted in the university research plots and in a commercial farm field as well.

For the lab and greenhouse trials, the majority of the seed treatments were applied through soaking, but have more recently shifted to experiments with spray application and the concentrations are being optimized. For most crops, soaking for one hour was adequate, with others requiring up to four hours. The germination of each crop was measured, along with root and shoot growth at different temperatures of 5, 10, 15 and 20 C. Root nodulation and crop yields were assessed, as well as vegetative and mature growth parameters in specific crops. The novel seed treatment and compatibility with current fungicides were investigated. For the on-farm trials, researchers used a commercial Storm seed treater that applies the seed treatment as a spray followed by short term drying, which produced similar enhanced root growth responses as seed soaking and may be a practical solution for field scale application. 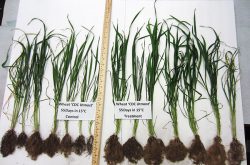 Under controlled conditions of 15 C, a single application of seed treatment to wheat (right) enhanced germination and provided for faster root establishment and more lateral root growth, as compared to the control. Photo by Rensong Liu. 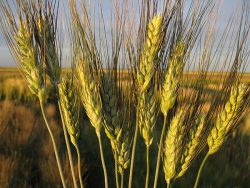 “The results of the trials showed that a single application of the seed treatment not only induced enhanced germination under both optimum and low temperature conditions, but also provided for faster root establishment and more lateral root growth,” Tanino explains. “The earlier establishment, improved plant density and greater root growth help the crops potentially avoid heat and drought stress during flowering, and avoid fall frosts through earlier maturity. Overall, the seed treatment had a positive effect on the majority of the broad range of crops tested, although we did see a few differences in cultivar response. In addition, the seed treatment proved to be effective over both the short and long term, including a long-term impact on increasing root and shoot growth and nodulation in certain legumes. Under controlled conditions, better rooting and shoot development were also achieved with the seed treatment combined with a fungicide, compared to a fungicide alone, and also helped overcome the negative effects of fungicide on seedling emergence.”

Researchers also conducted storage life experiments for both the catalytic solution and on-farm treated seeds. The results showed that the solution can be safely stored for at least one month, while the on-farm treated seeds can be stored for at least one week and remain effective. However, the results were crop-dependent and therefore the storage experiments are planned to be repeated with shorter time intervals. “In addition, we are puzzled by the results showing that although the catalytic treatment solution consistently induced greater lateral root growth under lab, research field and farm conditions, and increased tiller number in wheat under field conditions, no other significant agronomic or yield advantage were observed in field research plot conditions in either wheat or canola. There seem to be some cultivar and planting date variances, but we are not sure why. Therefore, we are conducting more detailed and greater sampling at various crop development stages, along with yield measurements in the field trials.”

In future, Tanino would like to optimize the spray treatment and look at different aspects of the seed treatment package, including evaluating responses under various abiotic stresses such salinity, drought and others. Another project is evaluating the potential for synchronizing malting barley germination and has just begun to investigate the seed treatment effect on Fusarium head blight and associated DON mycotoxins. This project is in the early stages, but so far looks promising. A project proposal under review is focused on the application for forage crops. Some early trials showed that along with enhanced germination and root growth, the seed treatment greatly improved the induction of nodulation on pulse and forage crops without any inoculation under controlled growth conditions. Therefore, this proposed project will hopefully examine the treatment effect under field conditions. Other projects are focused on application to increase germination of artificially aged seeds,
applications for rice and other crops and cultivars.

“The next immediate steps are to work towards optimizing the seed treatment application for field scale application. This will include optimizing the liquid spray seed treatment process, evaluating application rates and other responses such as seedling emergence, plant growth and development, plus crop yield,” Tanino says. “Our initial treatment cost to crop return benefit ratio calculation indicates a crude estimate for the lowest gain of a return of at least 25:1 based on wheat. Therefore, once commercialized, this seed treatment will be inexpensive, simple to use, easy to apply and also suitable for organic production. We plan to continue field-scale trials in 2020, and hope to continue research field plot trials through our university and plant breeder relationships. Then we will be ready to work with interested industry partners to move forward on commercializing this patented technology for farmers.”

For Tanino, what makes this novel seed treatment technology so exciting is that a one-time application of the seed treatment results in consistent long-term effects and multiple agronomic responses for a wide range of crops. “With the benefits of enhanced germination and early spring establishment, along with faster root establishment and more lateral root growth, the crops tend to have better standability and crop vigor. These characteristics should mature the crop earlier and more consistently, and maximize yield potential. The enhanced early crop vigor also helps crops avoid various environmental stresses, including summer drought and heat impacts, early frosts and others. In the future, once commercialized, this seed treatment technology should be cost effective, easily achievable and enhance the value of the seed package in preparation for seeding for both conventional and organic growers.”