How well do these tools work in narrow-row dry beans? 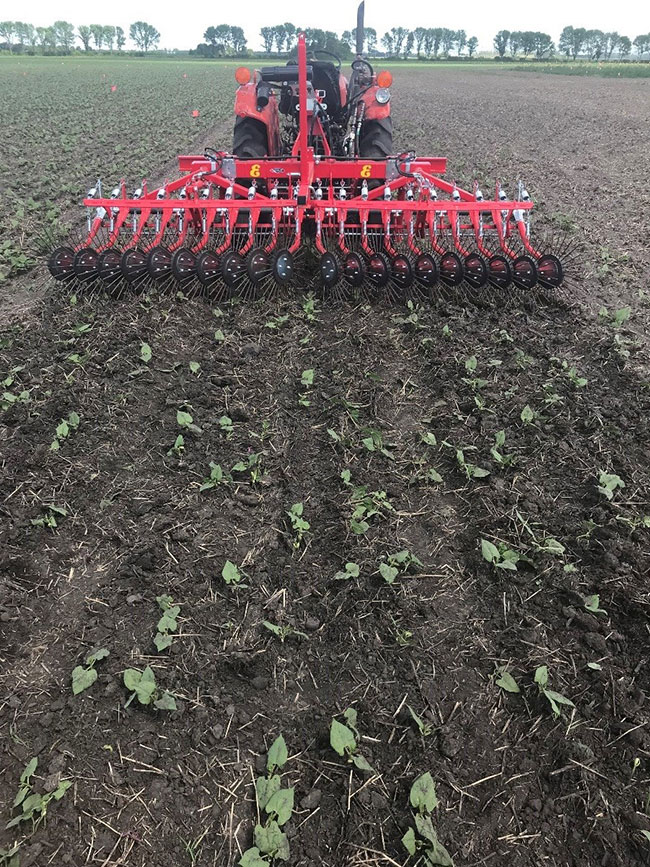 One tool tested in the project was this Einbock Aerostar Rotation, a type of rotary harrow. PhotoS courtesy of Katherine Stanley.

Results from a two-year project on some mechanical weeders that are fairly new to the Prairies show that such tools can be a useful addition to the weed control toolbox for narrow-row dry beans.

“Traditionally, dry beans have been grown in wide rows to allow row-crop cultivation. Through communications with Manitoba farmers and the Manitoba Pulse and Soybean Growers (MPSG), we learned that there was increasing interest in the potential for narrow-row bean production,” explains Katherine Stanley, a research associate in Martin Entz’s research group at the University of Manitoba.

“Some of that interest came from growers who had not grown dry beans before and wanted to try the crop using their existing narrow-row equipment. Also, some preliminary research was suggesting that planting dry beans in narrow rows could provide various agronomic benefits, such as improved weed control. So, we and MPSG wanted to look at how to incorporate mechanical weeding in a narrow-row bean crop.

“On top of that, dry beans are not very competitive with weeds, and herbicide options are quite limited for this crop. That is concerning for the development of herbicide resistance. So, looking at some mechanical weed control options as a component of an integrated weed management strategy is super important both to improve weed control and to extend the efficacy of weed control into the future for this crop.”

One of these tools is a type of inter-row cultivator. Stanley explains, “It works much like a wide-row cultivator that most farmers are quite familiar with, but it is designed to work in narrow rows as well as wide rows, and it is camera-guided.”

Its camera-based guidance system automatically keeps the sweeps in the inter-row spaces, avoiding contact with the bean plants. Stanley says that with crops like cauliflower or lettuce, where the foliage of one plant is quite separate from the foliage of the next plant, the cultivator’s sweeps are able to go in a full circle around each plant.

“We have seen this technology used on row spacings as small as 5.5 inches. That spacing still allows for operation at relatively high speeds for mechanical weed control operations,” she adds.

Stanley notes, “A lot of engineering work has gone into designing these cultivators to maximize weed control and minimize soil disturbance. They are more of a minimum till tool because they are not inverting the soil. The amount of soil movement depends on the shape of your sweeps and how fast you’re going. A small amount of soil-throwing is desirable because it can bury some small weeds. So this tool can provide a dual action: burying the weeds, plus cutting the weeds just below the soil surface.”

Entz’s group has a Garford Robocrop InRow Weeder, but Stanley says other equipment companies have similar types of inter-row cultivators.

The other tool in the project is an Einbock Aerostar Rotation, a type of rotary harrow. “It is similar to a rotary hoe except the design is slightly different. The tines radiate out from a rotating disk, but on the Aerostar, the disks are at about a 45-degree angle from the tractor rather than straight behind it,” she says.

“This harrow has a dual action of flicking out small weeds and a little drag to cover some small weeds with soil.”

The tines come into contact with both the inter-row area and the crop plants. That means the harrow can provide weed control within the crop rows as well as in the inter-row spaces. However, it also means that there is only a certain window of time in the crop’s life cycle where the harrow can be used without damaging the crop. “Depending on the crop type, if the plant is too small or if it is too large it may be damaged by the harrow.”

Wide crop window for rotary harrow use
The project was conducted in 2018 and 2019 in Carman, Man. It involved two components: an evaluation of the tolerance of bean plants to the rotary harrow; and an integrated weed management study.

Both components were carried out in black beans (Eclipse), navy beans (T99095) and pinto beans (Windbreaker). These three bean classes are the ones most suited to narrow-row production.

To evaluate the crop’s tolerance to the Aerostar harrow, the project team tested this tool at different crop stages over several weeks, starting from ground crack. Stanley explains, “We hadn’t used this tool before, so this experiment was giving us an idea of how aggressive it is on the crop itself.”

In both 2018 and 2019, they found that the harrow caused no significant yield loss or damage to the bean plants, no matter when the tool was used from ground crack to about the fourth or fifth trifoliate leaf stage.

In 2018, they tested the harrow right up to the first flower stage. In a practical situation, you wouldn’t use the harrow at such a late crop stage, but the team wanted to push the envelope just to see what could happen. At this stage, they ran into problems like the equipment getting tangled in the pinto beans and ripping out the plants.

The experiment’s results show that the window of time for crop-safe use of this rotary harrow in beans is quite wide.

Stanley recommends using it at the bean crop’s unifoliate to first trifoliate leaf stage. “That is really the optimal time that you’ll have those small weeds that this tool controls.”

Researchers at the University of Manitoba evaluated some mechanical weeders, including this Garford inter-row cultivar, in narrow-row dry beans. Photo courtesy of Katherine Stanley.

In 2018, all the treatments were conducted in narrow (six-inch) row spacings. In 2019, the team not only repeated the narrow-row experiment but also added a second experiment on wide-row (24-inch) beans that included treatments with an additional mechanical tool – finger weeders.

Stanley explains, “In 2018, we found that the inter-row cultivator provided very good control of the weeds between the crop rows, but didn’t give effective weed control within the crop row itself. In a bean crop, the canopy takes a long time to close, so any weeds in between the individual bean plants can be very competitive. So we were really curious to see if adding finger weeders to the inter-row cultivar would help to control in-row weeds.”

A finger weeder consists of a rotating steel disk with flexible fingers. Those fingers can dislodge or bury small weeds right in the crop row. With the current design of the equipment, the finger weeders can only fit onto the inter-row cultivator when the cultivator is set up for wide rows.

Stanley outlines the key results: “In general in 2018 and 2019, in both the narrow-row and wide-row beans, we found that all of the treatments that included a preplant incorporated herbicide – whether it was followed by a herbicide or by mechanical weeding – had the highest bean yields and the most reduced weed biomass. In some cases, the preplant incorporated herbicide on its own was just as effective as these other combined treatments.”

However, she notes that conditions were very dry during 2018 and 2019, and the effect of the preplant-only treatment might not be as long lasting in wetter years. “If you get a lot of rain, it encourages more weeds to grow. So rather than relying only on a preplant incorporated herbicide, you definitely want to have another weed control tool in your back pocket for later in the season,” she says.

“Certainly in 2019, there definitely was a benefit from following up the preplant incorporated herbicide with either more herbicide or a mechanical weed control tool.”

She emphasizes, “It didn’t matter whether you used an in-crop herbicide or a mechanical tool for the follow-up control.”

The finger weeder results were also very interesting. “When we used the inter-row cultivator with the finger weeders twice without any herbicide applications at all, we found that it was just as effective as the full herbicide treatment in terms of both bean yield and weed biomass.”

So, the finger weeder option could be of interest both to organic farmers and to conventional farmers who are using wider rows.

“Our big takeaway from this integrated weed management study was that a preplant incorporated herbicide was really important for early season weed control when the bean crop is very non-competitive with weeds,” Stanley says.

“Then you scout for weeds to decide on follow-up control measures. That follow-up could be done with either herbicides or one of these mechanical weed control tools. If you want to use a mechanical tool, then scout your field before applying the tool to make sure the weeds are at the appropriate stage for effective control by the tool.”

Excellent tools to add to your toolbox
“I’ve always had a little bit of a soft spot for some of these different equipment options,” Stanley notes. In fact, her master’s thesis at the University of Saskatchewan looked at mechanical weed control in narrow rows in field pea and lentil production.

“The camera-guided inter-row cultivator is one of my favourite mechanical tools. The camera technology is fascinating, and I expect this type of equipment will become more and more available on the Prairies, especially as the technology becomes cheaper,” she says.

“I was interested to see that the Aerostar harrow performed well, but I wouldn’t necessarily say it is going to replace a classic set of spring tine harrows for organic farmers.”

Overall, Stanley says, “Whether you are an organic farmer or you are a conventional farmer trying to either reduce your selective pressure on developing herbicide resistance or you already have herbicide-resistant weeds, it is worth considering some of these mechanical tools. There is good information out there about them – a lot of research has been done on all of the mechanical weed control tools that are available, not just the ones we used in our study. They are excellent tools to have in your toolbox for an integrated weed management strategy.”

Manitoba Pulse and Soybean Growers and the Manitoba Government provided funding for this project.