Characterization for rust resistance genes in flax and development of molecular markers for screening. 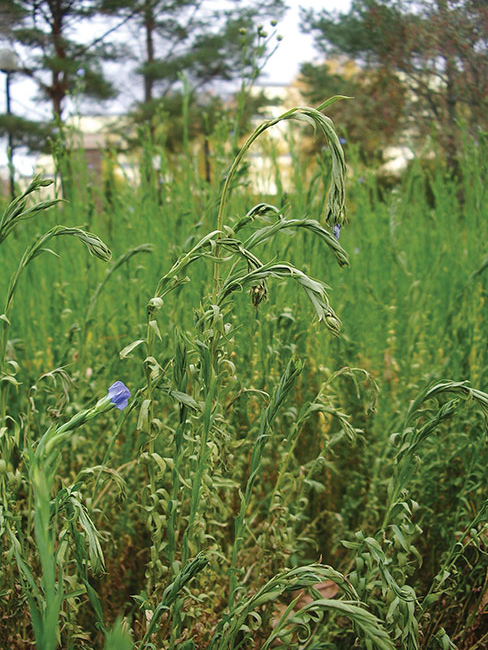 Screening for resistance for rust, Fusarium wilt and other pathogens remains a priority in flax breeding programs. Although there hasn’t been an outbreak of flax rust since the 1970s, plant breeders of modern flax cultivars still need to ensure that all registered flax varieties are resistant to rust and must have moderate resistance to fusarium wilt.

“In our crossing program, we previously had to focus on using North American germplasm to maintain the needed disease resistance traits, which limited the selections for crossing,” says Helen Booker, flax breeder with the Crop Development Centre (CDC) at the University of Saskatchewan. “For example, resistance for Fusarium wilt comes from one cultivar, Bison, which has been around since the 1930s, and this cultivar is found in all the pedigrees of Canadian flax cultivars. In order to broaden the genetic base in the working collection, it became important to look at developing molecular markers so we could look outside of North American germplasm and cross with ‘exotic’ material from Europe or China or other parts of the world in order to improve traits such as yield and seed quality, while still having the needed resistance genes in the material. Firstly, we started work on rust resistance genes in flax because there is a good body of research on the disease in flax.”

“In order to broaden the genetic base in the working collection, it became important to look at developing molecular markers so we could look outside of North American germplasm and cross with ‘exotic’ material from Europe or China or other parts of the world in order to improve traits such as yield and seed quality.”

The early work on flax rust dates back to the 1940s and 1950s, where plant pathologist Harold Flor from North Dakota State University postulated the gene-for-gene interaction theory between the plant and its pathogen. The model is that for every gene for resistance in the crop plant, there is a corresponding and matching gene for avirulence in the pathogen, which continues to be the foundation for disease resistance breeding and genetics today across all crops. Flor applied this model to his flax work and characterized different rust pathogen races and rust resistance genes.

“We initiated a project in 2017 to gain more detailed information about the genes responsible for flax resistance to rust and to identify possible molecular markers to assist with our screening efforts,” Booker explains. “There are five known rust resistance genes that reside in five different locations in the flax genome K, L, M, N, and P, and our goal is to map these genes in the flax genome and determine the specific alleles at each location.

The current flax cultivars in North American possess at least two resistance genes, and the last known race of flax rust in North America is isolate 371. Our work shows that in most Canadian cultivars the alleles at L6 condition resistance to that race and we have developed a molecular marker for the L6 allele. We now know where all the major resistance genes are in the flax genome, most of the alleles for the L locus and are trying to fine-tune the M and K loci as well.”

At the end of the project, Booker expects to have more molecular markers in place to assist with the screening for rust. Utilizing genomic DNA extraction and multiple markers for screening diseases such as rust are considerably less labor-intensive and time-consuming, and therefore are cheaper and more efficient. Traditional screening done at a phenotypic level is more time consuming and costly because allelic identification requires repeated inoculation with individual races followed by visual scoring of infection rate and type. Biosafety equipment and procedures also need to be in place when using ‘exotic’ or non-endemic rust races. Booker works closely with the CDC cereal and flax pathology program and the Morden Research Centre on disease resistance investigations.

“Utilizing genomic DNA extraction and multiple markers for screening diseases such as rust are considerably less labor-intensive and time-consuming, and therefore are cheaper and more efficient.”

“Our goal in the flax pathology program is to maintain that successful history of rust resistance and fusarium wilt resistance in flax,” says Randy Kutcher, professor and chair of the Cereal and Flax Pathology Program at the University of Saskatchewan. “The largest flax pathology program was led by long-time flax pathologist Khalid Rashid at Agriculture and Agri-Food Canada’s (AAFC) Morden Research Centre until he retired this year. Along with maintaining all of the differential lines and rust races, he did all of the screening work at Morden on all of the parent lines and lines proposed for registration in the growth chamber to make sure they were resistant to rust isolate 371. His work is a real success story, as we haven’t seen rust in commercial flax production since the 1970s, maintaining rust resistance in all of the commercial varieties. He also maintained the longest running fusarium wilt nursery at Morden.”

With Rashid’s retirement however, the AAFC flax program at Morden has been closed down and the rust screening moved to Kutcher’s program at the University of Saskatchewan. With funding under the Canadian Agricultural Partnership Program, AAFC has committed to continuing the Fusarium wilt nursery component of the flax program and technical staff for four more years at Morden.

“We now do all of the rust screening for lines proposed for registration and the parent lines that Helen Booker is using for breeding. Last year was the first year for us and everything went very well. We will continue to do the rust phenotyping screening in the growth chambers as well as utilize molecular markers as they become available.”

At the University of Saskatchewan, a second Fusarium wilt nursery has been in use for many years. Kutcher expects in the future all of the material will eventually be screened in Saskatchewan in his program and possibly at Indian Head where a nursery exists, which is relevant as about 90 per cent of flax production in Canada is currently in Saskatchewan. The Fusarium wilt nurseries at both Morden and Saskatoon are rated three times a year, with Kutcher’s team assisting in the third rating at Morden later this growing season.

“We also do annual disease surveys and find Fusarium wilt on occasion in commercial flax fields, so it is definitely part of the breeding program to make sure we reduce it as much as possible,” Kutcher adds. “In most cases, Fusarium wilt is not severe, although for a particular grower it can be a problem with the typical shepherd’s crook symptoms quite visible. We also survey for pasmo, which is probably the most wide-spread flax disease currently and can be a problem under some conditions. We usually see pasmo in almost every field, but often it is late in the season with marginal impact, but in some instances fungicides can make quite a difference. So far breeding efforts are finding little resistance or differences among cultivars for pasmo. Powdery mildew can also be a problem under more humid conditions, particularly in Manitoba. Through our flax program, we will continue to work with the breeder and the industry to screen for rust and fusarium wilt and monitor diseases through the annual surveys.” 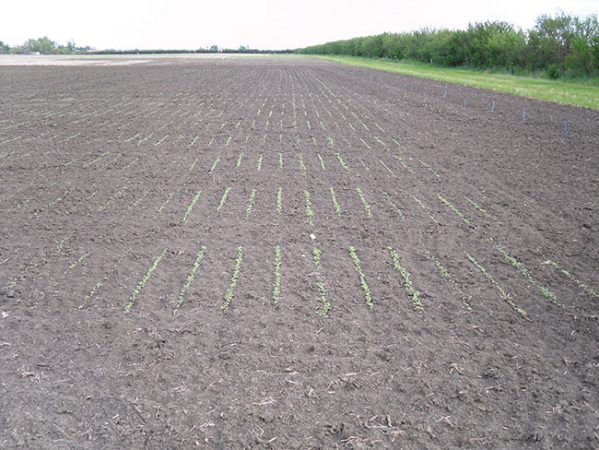 Flax seedlings at the Fusarium wilt nursery at the University of Saskatchewan Crop Development Centre.

Through the CDC Flax Breeding Program, several recent cultivars have been released and commercialized, consistently providing improved genetics to producers and end users. Booker notes that in 2012 CDC Glas was released, which was the second most popular cultivar in Western Canada in 2018. CDC Neela followed, with a larger seed size and a yield advantage.

“In 2015, we released CDC Plava, which was the first northern adapted flax cultivar for the shorter season northern Prairies,” Booker adds. “Other registrations followed including CDC Buryu, CDC Melyn, CDC Dorado and in 2018 CDC Rowland was released, the first variety that I was the sole breeder for. This variety has a significant yield advantage of 112 per cent of CDC Bethune across western Canada, and also has a very large seed size. It takes about 10 years from the first crosses to registration.”

Booker explains that all of that material would have been tested at AAFC Morden by Dr. Rashid. “Although we have recently moved the rust screening to our CDC Flax Pathology Program and some of the wilt screening, we are still concerned about the long term strategy for maintaining the differential lines and rust races and evaluation of Fusarium wilt. The Fusarium wilt nurseries are fixed assets and the Morden facility has been in place for over 100 years, so hope to find ways for it to continue. We have established one here at CDC and have earmarked some resources for the development of another wilt nursery, which are very important for our research and breeding efforts going forward.”

These traditional screening methods combined with the new molecular markers and tools under development will help speed up the early stages in the breeding program, particularly with ‘exotic’ materials from outside North America.

“We can quickly test new flax lines by first screening for rust race 371 in Randy Kutcher’s program, and then screening the parental lines with molecular markers and only advance materials that have L6 alleles for rust resistance,” Booker says. “Usually about half of the materials won’t have the resistance allele, so we are saving time by only planting out and testing materials that most likely will become cultivars. Using the molecular markers helps ensure we start with the resistant genetic background we require and then advance materials with other traits we are looking for such as climatic adaptation, maturity, yield, seed size, oil content and profile into multi-location testing.”

Booker’s rust resistance characterization project has been extended for another year into 2020 to resolve the M locus and develop specific molecular markers for some of the alleles. All of this information will reside in a data library for genes and alleles related to all known flax rust-resistance genes and help inform flax breeding efforts in the future.