Kubota Canada Inc. launched the FastBale, a continuous round baler and the newest addition to their existing lineup of hay tools, on Jan. 30. The FastBale’s twin bale chambers and wrapping system ramp up baling efficiency, uniformity and quality without stopping or allowing the bale to touch the ground prior to completing the process. 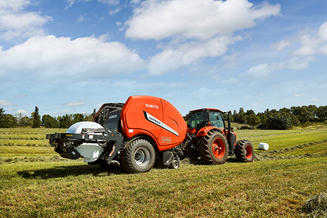 “Unlike a conventional round baler, the FastBale’s design saves the operator considerable time, since there is no stopping to finish the binding and to discharge the bale,” Yannick Montagano, Vice President of Sales and Marketing for Kubota Canada Ltd., said.

The FastBale was developed and built by the Kverneland Group, a Kubota subsidiary, at their facility in Ravenna, Italy. The baler uses two bale chambers arranged in series – a pre-chamber and a main chamber. The pre-chamber is two-thirds of the size of the main chamber, which allows the FastBale to create a dual density bale from a fixed chamber baler, making it a very compact baler-wrapper combination.

The baling process starts with feeding crop into the pre-chamber using an 800 mm intake rotor equipped with a 25-knife chopping system. When the bale has achieved the set density in the pre-chamber, the crop flow and the bale are transferred to the main chamber. Once the bale is complete, the crop flow is redirected back to the pre-chamber and the netting is applied. The bale in the main chamber is then ejected onto the wrapper, where it is quickly wrapped and placed on the ground with no rolling momentum. When the pre-chamber is full, the process repeats itself, which enables baling to continue uninterrupted, making baling easier and more efficient.


Related
CLAAS announces additions to line of baler and hay tools
Sponsored: The business benefits of baleage
Doha round in a ‘moment of truth’
Controlling round-leaved mallow