Integrated Pest Management (IPM) principles have been thrown around frequently over the past few decades, as instances of insect resistance have developed and growers around the world struggle to contain insect outbreaks. Scott Meers, insect management specialist with Alberta Agriculture and Rural Development at Brooks, Alta., provides an overview of IPM, and says it has a good fit in Western Canada.

“Luckily, on the Prairies we have low insect levels most of the time, and while we do get some outbreaks, for the most part, utilizing IPM principles can help keep insects below threshold levels,” says Meers.

The United States Environmental Protection Agency defines IPM as “an effective and environmentally sensitive approach to pest management that relies on a combination of common-sense practices. IPM programs use current, comprehensive information on the life cycles of pests and their interaction with the environment. This information, in combination with available pest control methods, is used to manage pest damage by the most economical means, and with the least possible hazard to people, property, and the environment.”

Meers says IPM is a continuum and implementing it doesn’t mean all or nothing. It’s not spraying or not. Indeed, spraying is part of IPM.

There are several reasons why IPM makes sense. Public image is one of them, and the public discussions about GMO labelling in the U.S. or neonicotinoid use and the impact on bees are examples that agriculture is becoming more closely scrutinized. IPM is one of the tools that can help show that farming uses ecologically sound approaches.

Additionally, the rules that apply to all populations in nature apply to the farm as well. If there is too much of a good thing, like a quarter section of monoculture wheat, and tight rotations, something is going to try to eat it, and will adapt to the new environment.

Insecticides may also not work, so only an integrated approach may be possible to control the pest. Wheat stem sawfly is a good example where insecticides don’t work, so researchers have resorted to IPM measures including resistant varieties and managing crop rotations.

Know your enemy
Accurate insect identification is an important component in IPM, and ensures that insecticide applications are targeted at the correct pest and at the right control stage for the insect.

Understanding the life cycle of the pest is also important. This helps to understand which pest stage is responsible for the economic damage, and can guide you if insecticide applications are warranted.

Holometabolism life cycles have four distinctive forms including the egg, larva, pupa and adult. Cutworm is a good example, and that pest’s larvae are usually responsible for the economic damage.

Grasshoppers are an example of a memimetabolish life cycle, which includes three stages: egg, nymph (juvenile of any instar) and adult. The nymphs usually cause the crop damage.

The control stage depends on the insect species. Bertha armyworm is controlled at the larval stage, but with the cabbage seedpod weevil, the adult fly is controlled to prevent it from laying eggs in the canola pod.

“So, we have to know the intricacies of the lifecycle because once the weevil lays its eggs in the pod, you aren’t going to control it,” says Meers.

Of hares and lynxes
A classic case in predator-prey relationships is the one between the hare and the lynx. Scientists have studied this linkage for the past century, and even Hudson Bay trapping records have identified that lynx populations fluctuate in an eight- to eleven-year cycle closely linked to the snowshoe hare population. Meers says that same type of relationship exists in agriculture, for instance between an insect pest and a beneficial insect that preys on the pest.

“What happens in the field if we go in and spray when we don’t have to and we artificially keep the bertha armyworm levels down at around threshold levels? You don’t get a build up of beneficials and you always have problems and they never go away. That’s how you can get into a cycle of always having to spray,” he explains.

Use thresholds to guide spraying
Beneficials are great, but pests can overwhelm them and cause crop damage. That’s when the sprayer becomes part of the IPM solution. On the Prairies, there are two kinds of thresholds.

For bertha armyworm, Meers says the thresholds are well proven with research and, over the years, using the thresholds based on insect populations, canola prices and sprayer costs have been well proven to provide an economic return.

“There is another threshold, called a comprehensive threshold, but we don’t have anything like this. They can include things like environmental impacts of spraying and things like that,” says Meers.

Meers cautions that thresholds are tied to a point in time of the lifecycle of the insect and the stage of the crop. “Twenty bertha armyworm larvae per square metre have to happen when the canola has pods. You can have 100 larvae on the leaves, but until they get up on the pods, they won’t do any damage,” he explains. “Timing is very important to thresholds.”

Experience at Vegreville, Alta., in 2013 supports threshold timing as a key IPM consideration that can help producers make money. A field was well above bertha armyworm threshold but not causing crop damage because they weren’t feeding on the pods. Eventually, a disease took out the larvae, and the field didn’t have to be sprayed, giving the beneficial insects another year to survive and control the pest, and saving the producer the cost of spraying.

“The other thing I will say about threshold is you cannot do a threshold from the truck at 50 mph. The only way is to get your feet in the field. You can’t go by what the neighbours are spraying, either. Every year spray decisions are made because of the neighbours and every year some fields are sprayed that didn’t need to be,” cautions Meers. “If you don’t go to the field you are guessing.

“The thing is that, as a consultant, once you’ve sprayed you’re not wrong any more. As a consultant, I get it, because it is easier to spray and be on the safe side than it is to say don’t spray. That is one of the most difficult decisions to make when the neighbours are spraying.”

Control and/or prevention
In addition to insecticide control, IPM incorporates other tools to control insect pests. Cultural control such as seeding date can be a very powerful tool for some insects. For wheat midge, Meers says control can be done with the calendar. Seeding wheat early can mean that it reaches antithesis (flowering) before the wheat midge starts to lay eggs, eliminating the need for spraying.

Another good example is in southern Alberta where just about every canola acre that comes into flower first is sprayed for cabbage seedpod weevil. However, there is a trade-off for seeding later, and that is lower yield, so most farmers seed early and spray.

Tillage may be a mechanism for control of insects, but often it also kills beneficial insects, and may even proportionally kill more beneficial insects than the pest, as is the case with wheat stem sawfly. Meers says a couple of exceptions where tillage might be beneficial in controlling pests is the presence of cutworms and slugs, but more research is required to see if tillage is beneficial.

Pheromones have been used to disrupt mating in high value crops, such as control of coddling moths in apples. Female pheromones are put out in high concentrations so the males can’t find a female. No mating means no eggs, which means no crop damage.

“New technology from 3M could let you take that pheromone and put in a microcapsule small enough to go through your sprayer, spray it on your field and interrupt the mating sequence of the wheat midge, maybe. So this may be the kind of thing we might see in the future,” says Meers.

In a nutshell, that’s IPM. Know your enemy. Apply various controls. Use economic thresholds to ensure chemicals are only applied when necessary.

“IPM isn’t really that hard to do. Add a couple of things here, pay attention to your timing there, and all of a sudden your control is working better,” says Meers. “We can hit the easy button if you’re paying attention. It is dollars in your pocket. You can get better crops and not necessarily spend more money. That’s what IPM is all about. We are trying to make money.” 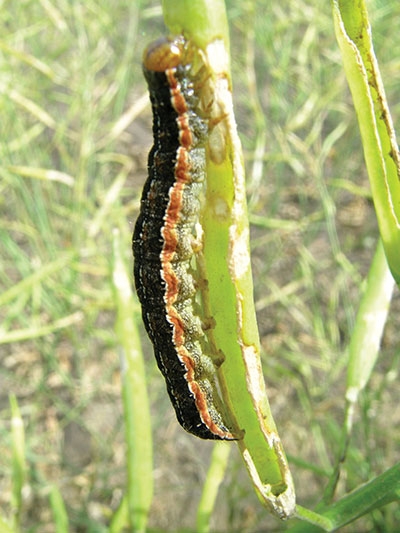 Beneficial insects can control bertha armyworm outbreaks. Integrated Pest Management (IPM) principles have been thrown around frequently over the past few decades.
Print this page