Updating information and tools for in-bin drying of flaxseed. 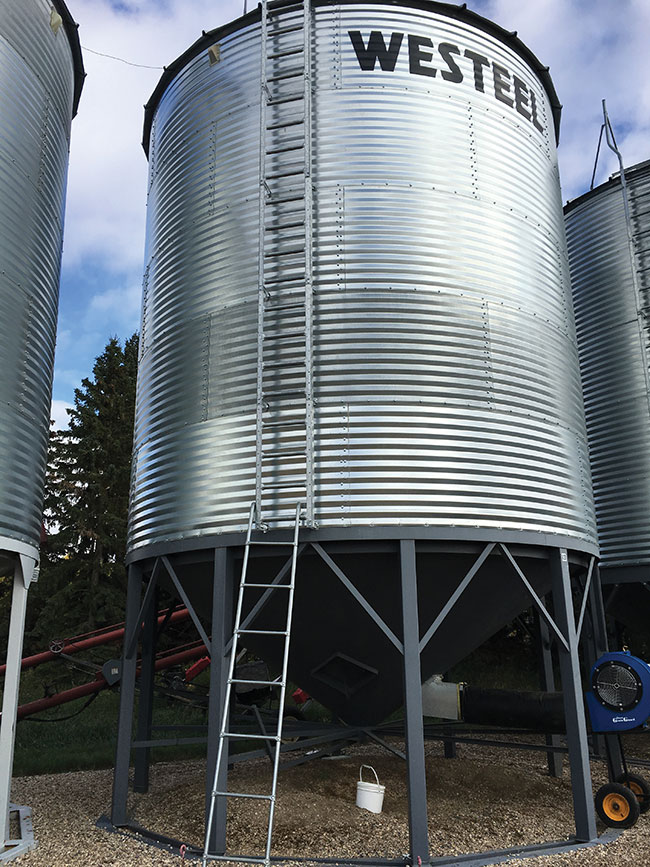 Spoilage during storage can take a big bite out of the returns for any crop, and flax crops can be at special risk of storage problems. So the Prairie Agricultural Machinery Institute (PAMI) has completed a two-year project to make sure growers have tools and information for effective in-bin drying of flax.

“Flax is typically harvested in late fall and the harvest window is narrow, so the crop often ends up being tough or damp as it’s coming off the field. As a result, flax usually needs to be dried down so it is safe to store in bins,” says Charley Sprenger, an agricultural research project leader with PAMI in Manitoba.

“PAMI has done a lot of work with natural drying and aeration for different types of grains, but there were some gaps in the available information specific for flaxseed. Because each commodity behaves a little differently, we wanted specifically to look at the effect of the airflow rate and the amount of moisture that can be removed from the flaxseed. Essentially, we wanted to better define some management practices for on-farm flax storage.”

“We also wanted to look at the models and charts for airflow resistance that producers use for selecting their fans for aeration to see if those tools are still valid for flaxseed.”

Several considerations prompted PAMI to take a fresh look at these three issues. “It’s been a while since some of the research was done. A lot of those tools are based on theoretical equations based on grain moisture relationships, and there hasn’t been a lot of validation on an actual bin scale,” she says. “Also, as bins are getting bigger, there is more impact of pressure drops from ducting systems, so we wanted to see if the resistance-to-airflow charts were still valid.”

The project took place in the falls of 2017 and 2018. The main component of the project was conducted at PAMI’s Humboldt, Sask. location, which has a set of six 15-bushel test bins. “We can continually monitor the weight of these bins with load cells. And the moisture content and relative humidity sensors in the bins allow us to measure in real-time what the drying conditions are in the bins and how much moisture is being lost,” Sprenger notes.

Each fall, the project team loaded the six bins with flaxseed and ran the trial for about a month, tracking the conditions in each bin. They compared three airflow rates – 0.2, 0.5 and 1 cubic feet per minute per bushel – so they had two replicates. The bins were randomly assigned one of the airflow rate treatments each year.

For the other part of the project, the team worked with six producers in and around the Humboldt area to take some measurements of static pressure (resistance to airflow) in various on-farm flax bins.

“We found that the airflow rate definitely has a large impact on drying rate, especially with high moisture content grain,” Sprenger says. “And we determined that there might be some benefits in using higher airflow rates for flaxseed, particularly later in the season when the number of drying days are limited; you can get a faster drying rate with the higher airflow.”

The researchers also found that ambient conditions have a strong influence on the capacity to dry grain in a bin; as the weather gets colder, grain drying is slower.

“In Year One, we had really good drying weather and we saw up to three per cent moisture removal over the three to four weeks of the trial. The grain went from a moisture content of 14 per cent right down to almost 10, which is safe to store. But in Year Two, we had an unusual fall and winter with some early snow, so the ambient conditions were very poor. And even with the high airflow rate, we only got a one per cent reduction in the grain’s moisture content,” she explains.

“So the ambient air conditions are just as important for whether or not growers will be able to dry their grain in-bin or whether they will have to go to a dedicated dryer to make sure the grain is safe to store.”

The researchers confirmed that the equilibrium moisture content charts are suitable for flax and don’t need to be updated at this time; the charts are available on PAMI’s website. “Producers can go ahead and use those charts along with their in-bin moisture and temperature sensors to predict grain moisture and monitor drying.”

However, they found that the airflow resistance charts slightly underestimate static pressure in flax. “The theoretical equations don’t take into account pressure losses from the fan ducting,” Sprenger says. “We might look at updating those charts, but for the time being, producers should understand that the charts underestimate static pressure and that they may need to increase the size of their fan to ensure they have adequate airflow for natural air drying.”

Based on the project’s findings, Sprenger offers some storage management tips. “The big thing we encourage with drying in bins for any commodity is to make sure you are measuring the static pressure in your bins to make sure your fan is sized correctly for the depth of grain so that you are actually getting the airflow rate that you need. That really makes a difference between whether you are moving the moisture all the way through the bin and actually drying, rather than just blowing some air in the bin and not achieving anything,” she says.

“And that is especially important with flax because the seed’s shape and small size mean that airflow resistance is a lot higher than in crops like wheat and corn, so you need to make sure that you achieve an effective airflow rate.”

Sprenger explains that it is easy to measure static pressure. “You can get gauges that you install on your fan inlet. Then, as you’re filling your bin, you turn on your fan, and take a measurement of the static pressure. You can then calculate the airflow using the manufacturer’s fan curve for your specific fan. Keep in mind that you may not be able to fill your bins to the top if your fan isn’t big enough.”

The Canadian Grain Commission’s website has charts for each grain type showing the temperature and moisture combinations for safe storage. “Typically for flax, you aim for a moisture content below 10 per cent and a temperature below 10 to 15 C. If the moisture is less than three per cent above dry, then you can probably dry the grain in-bin. But if the moisture content is higher than that, you’ll want to dry it separately,” Sprenger says. “Since flax is usually harvested later in the season, the temperature tends not to be as much of a concern as long as you can get the moisture down a fair amount so you don’t get some hot spots occurring from spoilage; that said, colder weather is less suitable for natural air drying.”

Higher moisture flax requires careful management to ensure safe storage. With the results from the PAMI project, growers can be confident that they have the appropriate tools and information for effectively managing in-bin drying of flax.