Improving nutrient use efficiency in all types of production systems is a priority as the price of fertilizer increases and environmental impacts related to inefficient use of nutrients in agriculture are recognized. A better understanding of how soil organisms can benefit nutrient uptake and improve efficiency can help farm managers optimize fertilizers and nutrient applications. This in turn can help reduce environmental impacts and greenhouse gas emissions while improving carbon sequestration and profitability.

“Arbuscular mycorrhizal (AM) fungi are microscopic soil organisms that are naturally present in most cultivated soils of Canada, although only a dozen species are dominant in agricultural fields from the Rockies to the Atlantic,” explains Dr. Chantal Hamel, research scientist with Agriculture and Agri-Food Canada (AAFC) in Swift Current, Sask. “AM fungi generally promote the growth of most plant species, including wheat, by mobilizing soil minerals, in particular soil P and other nutrients like copper and zinc that are not very mobile in the soil.”

One way to look at AM fungi is to think of them as probiotics for plants because they help improve plant health in many ways. The AM fungi form a dense network connected inside and outside of plant roots that can rapidly transport soil nutrients into the plants. AM fungi also are known to protect plants against abiotic stress (heat, drought, cold, salinity) and soil-borne pathogens such as Fusarium and Pythium species.

“Despite the importance of the AM fungi for plant nutrition, no technology existed to identify the fields in which AM fungi are doing a good job with feeding P to crops and the fields where agronomic interventions are required,” explains Hamel. “The lack of a simple and inexpensive method to assess the ‘health’ of AM fungal community in cultivated soils has been a main barrier to the management of AM fungal resources in agroecosystems. These fungi do not grow in pure culture; they are microscopic in size and hidden in the soil matrix, so we needed to find a way to assess AM fungi in the field.”

To overcome this hurdle, researchers initiated a project in 2007 to determine what factors were driving wheat productivity and N and P uptake efficiency in organic and conventional systems. One of the objectives was to investigate the possibility of using simple indicators to assess the abundance and structure of the AM fungal community living in cultivated soils. Soil samples were taken from a total of 248 commercial fields in 2007, 2009, 2010 and 2011 in all Prairie soil zones under both conventional and organic management in Saskatchewan, Manitoba and Alberta. Each field was sampled three times in the spring, at mid-season and in the fall. Researchers also examined the relationship between plant P uptake and soil P supply capacity in a subset of 113 Prairie soils growing wheat from the 2009-2010 dataset to document the extent of P fertilization needs in Prairie soils.

“To analyze and describe the AM fungal communities living in these soils, we used a combination of cutting-edge metagenomic DNA analysis techniques, a PRS-probe provided by Western Ag Innovations to measure soil nutrient supply rates and gathered soil physical property data from the National Soil Database and weather data from Environment Canada,” explains Hamel. “We were then able to group the AM fungal DNA sequences found in soils based on similarity. We also developed computer modelling tools to model the distribution of these groups, called ‘operational taxonomic units’ (OTUs), in the landscape.”

The results provided new information about the AM fungal communities of soils, which were simpler than expected. Researchers found about 122 different fungi, but only about five were dominant, co-existing with numerous rare specialized AM fungal species. OTUs belonging to the genera Claroideoglomus, Funnelliformis and Rhizophagus were the most abundant; a few OTUs belonging to Diversispora and Entrophosphora also were found. Researchers learned that the main drivers of AM fungal diversity varied with the species of AM fungi. Soil organic matter level and soil texture were most often significantly correlated with the relative abundance of the different AM fungi. However, the relative abundance of the five AM fungal OTUs was not related to any of the environmental variables measured.

“We discovered some very interesting information about the AM fungi that will help with nutrient management in the field,” says Hamel. “The Claroideoglomus group was associated with efficient N uptake in conventional systems, while in organic systems this group was associated with efficient P uptake. The Rhizophagus group was positively related with P uptake efficiency in both conventional and organic. We also discovered a little known group, Glomus iranicum-indicum, that is negatively associated with wheat growth and both N and P uptake in organic systems. This group, which is relatively abundant in cultivated fields and native prairie, seems to have a parasitic effect and reduces wheat productivity primarily in organic fields.”

The field survey results also showed a trend for higher P use efficiency and higher levels of AM root colonization in organic as compared to conventional wheat crops. Phosphorus limitation is an important problem in organic wheat production in the Prairies, since 57 per cent of the organic wheat fields surveyed had a soil P supply rate under the threshold where wheat P uptake is restricted by soil P fertility. Although organic fields tended to have lower yields, the plants had higher concentrations of nutrients than under conventional systems. Another important driver of productivity is soil moisture, which is impacted by tillage. Therefore, AM fungi populations may also differ under different tillage systems.

“Now that we can determine which AM fungi are in fields and which soil conditions promote the growth of different strains and whether they are helpful or detrimental to production, we can begin to develop management strategies to improve nutrient uptake and efficiency,” says Hamel. “If the field does not have very good soil biology, then either putting on more fertilizer or using a mycorrhizae inoculant will improve nutrient uptake. We have done some research with Myke Pro mycorrhizae inoculant with wheat and have had some good results. However, if a field has enough good AM fungi and few bad ones, little response is expected and it would probably be a waste of money to add inoculants. We also need to do more research on cropping practices to determine what has a positive or negative impact on AM fungi.

“We have developed fancy soil tests to analyze AM fungal communities in soil samples and our research shows that national databases on soils and climate, and soil analyses using PRS-probe can be used to develop cost-effective tools for the management of nutrient-efficient wheat production systems,” adds Hamel. “We have shown that we can use simple indicators to assess the abundance and structure of the AM fungal community living in cultivated soils. We will continue to work towards tools that industry can use to benefit from AM fungi and their role in improving nutrient uptake and efficiency in wheat and other crops.”

Dr. Eric Bremer, head of research and development with Western Ag Innovations, adds that they are very interested in the results from the research and are evaluating how to take the next step. “We are considering how to incorporate the findings into a decision support tool like we do with our other services. Although it is probably a ways down the road, our understanding and the technology continues to improve and we will continue to work in this area. We can build on tools such as the PRS-probe that already provides a good system for assessing fertility and crop nutrient requirements and combine that with information on AM fungi to improve crop nutrient management under both organic and conventional systems.” 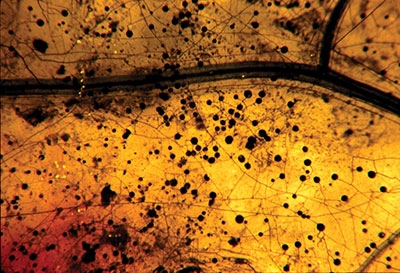 A root of alfalfa as it occurs in the soil with the AM fungi network. Improving nutrient use efficiency in all types of production systems is a priority.