According to Bill Chapman, crop business development specialist with Alberta Agriculture and Rural Development (AARD), it is important to keep in mind volunteer winter wheat is more advanced than any other spring emergence volunteer.

“Volunteer winter wheat is a little harder to kill, because it could be further established/advanced, but you just need to manage your rotation to control it,” says Chapman. “In some cases, control is more important, as it could have a significant population effect if there are major volunteer problems in the chaff or straw rows from the previous winter wheat crop.”

With 75 to 80 per cent acres in Western Canada today being direct-seeded, controlling volunteer winter wheat with tillage isn’t much of an option for most, notes Chapman. “Your best bet is a good rotation.

Mother Nature, too, plays a role. Some volunteer winter wheat will sprout, grow and stay green in the fall, prior to that spring-seeded crop. Spring-seeded volunteers will do the same, but will freeze off in fall conditions.

“If you previously grew winter wheat and seeded (your field) the next year to broadleaf crops (i.e., canola, peas or other pulse crops), you’re better off doing a spring preseed burn-off, rather than drying out the seed bed with tillage,” he adds. “On the other hand, if you’re still using tillage – to help dry the soil – normal tillage will help control volunteers.”

How well a preseed burn-off will control volunteer winter wheat, however, depends on the rate of glyphosate used.

“Going with the full recommended rate of herbicide and water volumes, you’ll probably control a high percentage of it,” says Chapman. “It depends, too, on how much volunteer winter wheat is actively emerged with high enough leaf surface for the product to do its job.”

Depending on what your seeded crop is, it is important not to use a broadleaf product tank-mixed with glyphosate that creates emergence problems for your main crop. It is also helpful to stick with your personalized plan and avoid some residual broadleaf products in the tank mix with the glyphosate (as a preseed burn-off) when seeding canola as well.

“A number of growers now, depending on when they get their spring crop seeded, do a post-seed burn-off after seeding,” says Chapman. “When doing so, they’ll lose a percentage of effective control, because some of those seeding-damaged plants will recover and return as a volunteer problem in their next crop.”

According to Chapman, the economic threshold of volunteer winter wheat is determined according to the plant population per square foot; and the stages of the plants should also factor into the equation. “You need to revisit some of the long-term data and look at some of the new formulas,” he says, noting no “perfect formula” exists, as populations vary from dry weather and heavier soil conditions. “It provides a recipe to follow, based on your land’s conditions.”

Some farmers will spray every year, while others change it up according to the latest data. It depends on the individual.

If you don’t control your winter wheat at all, the predicted yield reduction comes down to your plant population and percentage of the total crop. “Say you seeded canola and you have 12 to 14 plants in that square foot,” explains Chapman. “In the end, you’ll lose a few to a number of diseases or for other reasons.

“It all comes down to percentages and a judgment call. If a third of your plants are volunteer winter wheat, it’s going to reduce your (crop) yield and be competitive with it.”

In Manitoba, there are higher percentages of soybeans, pulse crops and flax that are not as competitive as other crops, like canola. As such, control is more critical. 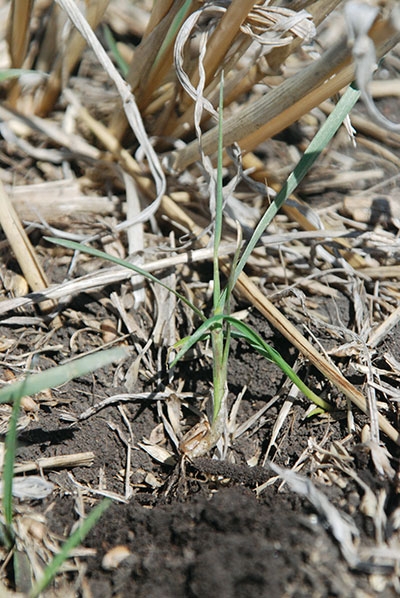