When researchers at the Prairie Agricultural Machinery Institute (PAMI) heard that some producers were looking toward the practice of straight cutting shatter-resistant canola varieties, they set out to find the true post-harvest comparison of straight cut or swath. 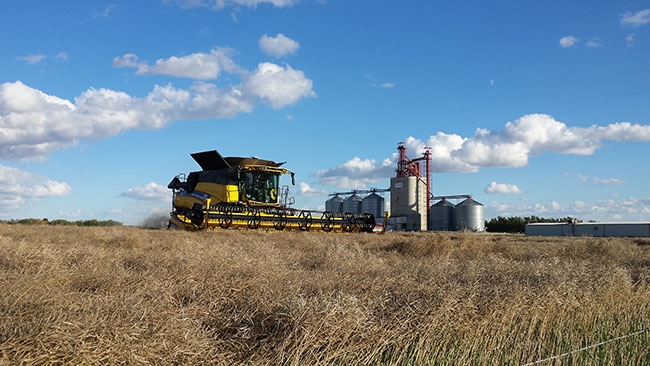 “With straight cutting, the main risk is shattering in the field from rain, wind and the environment,” says Nathan Gregg, program manager with PAMI Applied Agricultural Services.

The shatter-resistant variety is bred to resist this so the canola can stand in the field longer, and since straight cutting is the norm for rapeseed in other parts of the world, Gregg says the team asked themselves, “If this is the case, what are the equipment implications? Can producers make do with the equipment they have with some modifications or will they need new equipment?”

The trial
With the intention of evaluating different header types for straight cutting canola to see if current technology would meet the needs of producers, the team planted both a standard hybrid canola and a pod shatter-resistant variety.

“Most producers are still using standard hybrid varieties, but we knew the newer genetics were coming on the market so it was important to use both,” Gregg says.

Gregg explains that the draper (2) has a moving canvas type of deck to convey material to the feeder house of the combine. “This represents the primary style of header in use and is universal for different kinds of crops,” he says.

The third treatment has a rigid auger header within the header platform that moves the material to the combine, while the fourth uses the same auger principle, but has an extendable cutterbar, which allows the floor of the header to extend forward up to 23 inches. The rigid header has limited space in front of the auger while the hydraulic-controlled extendable cutterbar allows more space in front to accommodate the bulky material.

“The other advantage [with the 35-foot Varifeed header with cutterbar] is the ability to move the knife forward and beneath the reel,” Gregg says. “This means the relative position of the knife is more forward, which places it directly beneath the reel with the intention of retaining any pods that are shattered beneath the reel. This style of header is popular in Europe where they do more straight cutting of rapeseed.”

They also discovered that machinery wasn’t the only factor to impact the results. Outside factors, like field selection, growing conditions and initial condition of the crop, also had an impact.

“Some of our treatment differences appear negligible relative to outside influences like weather and crop conditions,” Gregg says. “We had variable weather throughout the three years, so we were able to determine that all factors into how well straight cutting will perform.”

All of the headers performed reasonably with marginal differences in factors like yield, loss, feeding performance and ground following. With all, the losses were greatest at the ends and the middle of the headers.

“What we found was that the extendable cutterbar tended to have somewhat lower shatter losses,” Gregg says. “The draper and auger performed the job but had more shatter, which will ultimately affect yield in the bin.”

The extendable cutterbar header was the most forgiving and adaptable to operate in straight cut canola, while the rigid auger was not as smooth to operate. The draper was good, but less intuitive, requiring more attention to reel position and speed while operating.

With that being said, the swath technology often came out on top with the standard hybrid variety.

“With the shatter-resistant varieties is where straight cutting treatments have a more positive impact, so it becomes a question of variety and header type, not just one or the other,” Gregg says. “You need the right machinery to do the job.”

He adds that since all performed relatively similar, if a producer wants to try straight cutting over swathing, they don’t have to go out and buy new equipment immediately. “They can try it with what they have; if they like it, they can decide if it’s economical for them then go out and invest in new equipment.”

The theory is with a straight cut operation, producers can eliminate a swathing operation, which eliminates machine and labour costs, and allows the crop to stand and mature in the field so they will get a yield increase.

“That’s the theory and one of the reasons people look at straight cutting, but the answer is convoluted,” Gregg says. “Yes, if they avoid swathing and can harvest at the optimal time. The limitation is you don’t always get the conditions at the time you need them, or maturity can be delayed. Then you may need to add in a desiccation spraying operation, which also has a cost.

“It may be an acceptable trade off,” he continues. “There can be an economic advantage to straight cutting but it’s not an absolute. It comes down to the harvest management strategy and the risk tolerance to leaving the crop out there to see if they can get a bigger yield.”

What’s next?
The findings have been recorded in a straight cut harvest guidebook that will be available on the PAMI and funder websites.

While this project focused on header equipment, it was discovered that other management considerations had an impact and raised additional questions about combine productivity and efficiency with straight cutting. As a result, further research is underway to look at combine efficiency and productivity as well as the impact of desiccation.

The researchers have collected one year of data and are going into the second year examining the impact pre-harvest treatments have on factors like overall yield, fuel usage and productivity in bushels harvested per hour.