Put another $8.20 per acre in your pocket with a simple adjustment. Slow down. Add an air reel and save $12.50 per acre. Those are the findings of a recent Prairie Agricultural Machinery Institute (PAMI) research project that looked at soybean header losses. 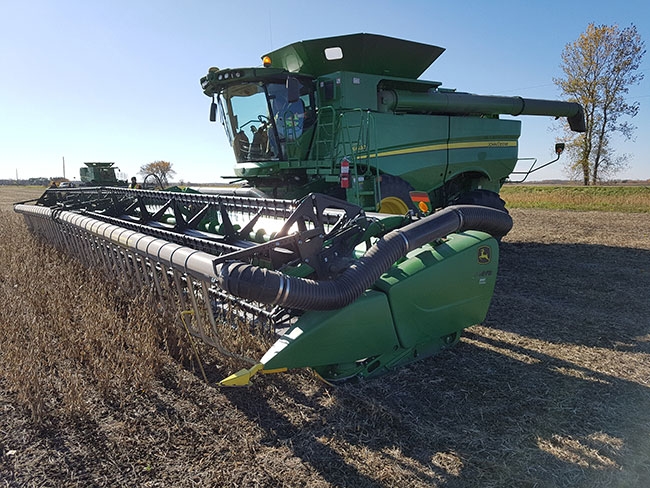 Finding the correct ground speed reduced header loss by almost one bushel per acre. Put another $8.20 per acre in your pocket with a simple adjustment.

“Under our conditions and the soybean variety that was harvested, we found that header losses could be reduced by almost one bushel per acre by slowing down,” says Lorne Greiger, project manager at PAMI Portage la Prairie, Man.

The researchers focused on header loss because research from Michigan State University Extension found that an estimated 80 per cent of harvest loss in soybean occurs at the header.

The PAMI trials took place near East Selkirk, Man. In 2016, two auger headers were used, with and without an air reel. In 2017, a draper header was also added to the trials. Greiger says the findings between 2016 and 2017 were similar, except speed wasn’t as great of a factor in 2017.

In 2016, ground speeds at harvest were two, three, four and five miles per hour. Header losses were measured with one square foot metal squares thrown randomly, with a minimum of forty loss samples per plot.

“Speed was certainly a factor in harvest losses. At some point, the header just can’t keep up with cutting soybeans,” Greiger says.

The addition of an air wind reel also reduced harvest losses. An air reel uses high velocity air to keep the crop moving quickly into the header. In 2016, an auger header equipped with an air reel cut harvest losses by 1.25 bushels per acre (about one-half), compared to an auger header without air reel. At $10 per bushel, a savings of $12.50 per acre would be achieved.

Measuring harvest losses
Greiger says the results of the research highlight the need for soybean growers to find their optimum speed for their own equipment and harvest conditions.

To estimate harvest losses at the header, use a one-square-foot metal square. A general rule of thumb is that four soybean seeds in the one-foot square equals one bushel per acre.

Estimate pre-harvest loss by randomly counting dropped pods and seeds prior to combining using the one-foot square. During harvest, randomly throw out the one-foot square after the header has passed over the ground and count the soybean seed in the squares. To avoid counting threshing losses, stop the combine and place the metal squares in the area between the header and the rear of the combine. Subtract the pre-harvest loss from the post-harvest loss to get the actual header loss. Experiment with different speeds to find the sweet spot for harvest speed and minimizing harvest losses.

Is taking the time and effort worth it? The PAMI study showed that slowing down or using an air reel gave potential savings of $8.20 to $12.50 per acre.

“Going too fast can result in higher header losses. It is worth the time to try to find the optimal speed to reduce header loss and still have reasonable harvesting speeds,” Greiger says. “In our study, it was four to 4.5 miles per hour, but that can vary depending on harvest conditions and equipment.”