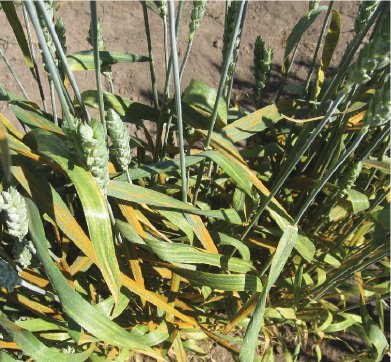 Storing grain on the ground has found a new method with the grain bagger. The
system allows easy and fast filling of heavy-duty plastic bags which hold up
to 12,000 bushels, then quick and easy extraction and loading into a truck,
leaving virtually no grain on the ground. While stored in the bag, there is
no spoilage from weather and problems from insects are eliminated.

The system comprises a PTO driven bagging unit which uses a large diameter
auger to push grain into the bag. As grain is forced into the bag, the tractor
and bagging machine are propelled forwards. Disc brakes on the bagger's two
wheels can be applied so that the correct amount of circumferential bag stretch
is managed.

Once grain is stored in the bag, it can be extracted at a later date using
a PTO driven extractor which incorporates a central feed auger, two angled sweep
augers and an elevating auger which delivers grain to a truck alongside. The
angled sweep augers are set so they can raise the sides of the bag as the tractor
reverses into the bag. Brush sweeps beneath them gather all but a very few kernels
in the bag. As the bag is emptied, the tractor actually drives on the empty
bag to maintain tension as it reverses into the bag, using a splitter knife
to open the bag as it progresses.

A second type of extractor works like a toothpaste tube roller, lifting the
grain in the bag into the extractor.

The system was first shown in Saskatchewan at the Western Canada Farm Progress
Show in Regina, in June 2006, by distributor, Grain Bags Canada of Lake Lenore,
Saskatchewan. Already interest is high and deliveries began before the 2006
harvest.

One system was purchased by Somerville Farms at Mantario, Saskatchewan, where
brothers Ken, Bryan and Sam Somerville grow mostly durum on 6500 acres. In 2006,
they had stored 110,000 bushels in the bags by mid September and planned to
add another 20,000 bushels. "We are short on storage," says Ken. "We
usually pile in the field or fix up old bins or use bin rings with covers, but
this system is simpler and more economical." He also has the option of
keeping grain for an extended period if grain prices are low and needs more
capacity than his permanent storage allows.

"Losses from weather and vermin, then collecting grain piled in the field
can be as high as five percent," says Aaron Yeager of Grain Bags Canada.
"The costs of grain bagging is about seven to 10 cents per bushel for the
bag material. This compares with capital costs of $1.25 to $1.45 per bushel
for storage bins." The bag system can be used at any location, even on
rented land where a farmer does not want to invest in permanent storage. The
user can weigh the operational cost plus the capital cost of the bagger, at
$18,000, and extractor, at $22,000, against the convenience and flexibility
of remote field storage.

There are other advantages: "Grain in the bags consumes the oxygen and
expels CO2 which cannot escape and this kills any insect
pests in the grain," says Yeager. He adds that once the oxygen is consumed
the grain goes into dormancy.

"We can eliminate the need for a truck in the field at harvest, plus the
manpower to operate it," adds Ken. He has ample help outside of harvest-time
to extract bagged grain for delivery to an elevator. In fact, he is making his
extractor available to other bag users in his area and offering them trucking
services as well.

Somerville also notes there is no bottleneck in the field. "With an 800
bushel Degelman grain cart, the operator has plenty of time to unload and oversee
the bagger while keeping our two John Deere 9650 STS combines operating at 1000
bushels per hour each."

The bags are made with durable 9.3 mil plastic and come in lengths of 200 feet,
which at 40 bushels per foot holds 8000 bushels and 300 feet, holding 12,000
bushels. "In other counties users have bagged grain at 17 percent moisture
without experiencing losses of quality," says Yeager. "Also, there
is no loss of germ if the grain is to be used as seed if it is dry when bagged."

Yeager says the idea of using bags is originally a Canadian concept, but difficulties
with retrieval hampered adoption of the idea. "This system, manufactured
in Argentina by Maniero, has solved the retrieval problem and is now in use
in 21 countries around the world."

He has great expectations for farmers and even elevators who want to increase
their remote storage capacity. "All they need is a level, accessible site,"
he adds, noting that one grain handler has a storage site with 1.2 million bushels
in bags. -30-