The pool of genetic diversity in a domesticated crop like barley is much shallower than in the crop’s wild relatives. So researchers sometimes bring individual genes from a wild cousin into the crop to add crucial traits. But plant breeder Duane Falk is tackling the problem from the opposite direction: he is re-domesticating wild barley lines. 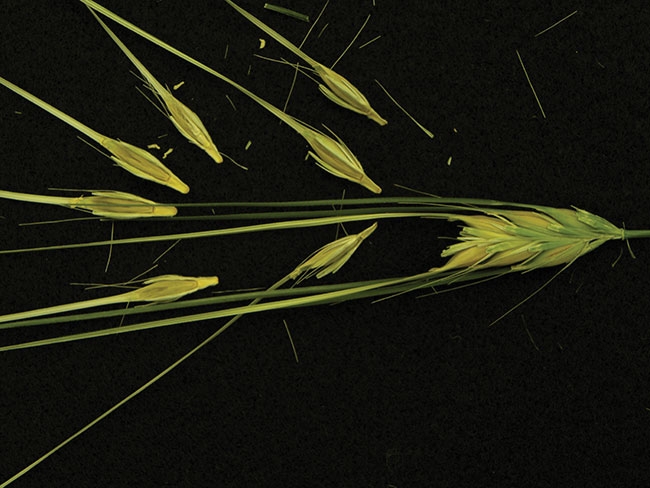 In wild barley The pool of genetic diversity in a domesticated crop like barley is much shallower than in the crop’s wild relatives.

With this novel approach, he hopes to enable barley breeders to access much more of the vast diversity occurring in wild barley.

Wild barley is native to the Middle East and was domesticated about 10,000 years ago. Falk explains that the first critical step in the domestication process was selection for a non-shattering rachis. A rachis is the central shaft in the seed head. In wild barley, Hordeum spontaneum, the rachis shatters at maturity, providing natural seed dispersal. In domesticated barley, Hordeum vulgare, the rachis does not shatter so the seed stays on the plant, allowing people to harvest it easily. He says, “A barley plant with a fragile rachis is of no value to a cultivated situation. And a plant with a tough rachis doesn’t survive in the wild.”

The mutation for a non-shattering rachis is thought to have occurred at least twice in barley’s domestication history. “Each one of those two major domestication events would have involved literally a single plant. And, as a self-pollinated species, that single plant would have been relatively homozygous [genetically uniform]. So, most of the variation that we have in our modern crop has occurred as mutations within those two original backgrounds. It’s easy to see why there is not much diversity in domesticated barley,” says Falk, who is a professor emeritus in Plant Agriculture at the University of Guelph. He led the barley and oat breeding programs at the university and has been breeding barley for more than 30 years.

“Domesticated barley differs from wild barley in at least 10 major characteristics, but all of those characteristics occurred by selection after it was domesticated,” he notes. These characteristics include things like larger seed size, more uniform maturity, stronger straw, and loss of seed dormancy. Modern breeding efforts have tended to narrow the diversity in cultivated barley even further.

Bringing genes from wild barley into elite breeding lines helps broaden the diversity in cultivated barley a little. “Wild barley produces abundant pollen and crosses readily with domesticated barley,” Falk notes. “A number of breeding programs around the world have used wild barley in a limited way, mainly as a source of single genes for disease resistance.”

But a single gene for disease resistance is only a temporary fix because the disease organism needs only one mutation to overcome the plant’s resistance. Also, crosses with wild barley bring undesirable wild traits into the progeny, such as a shattering rachis, dormancy, weak straw and so on. So the progeny are troublesome to plant and harvest, and repeated backcrossing with the cultivated parent is needed to get rid of those unwanted traits.

Potentially, wild barley could offer much more than a few single disease resistance genes. “Wild barley has a lot of genes and gene complexes [for disease resistance and other valuable traits] that would be very difficult to bring into domestic barley, especially if a trait involves two or three genes that are independent of each other,” says Falk. “For instance, wild barley is adapted to a much wider range of environments than domestic barley. These adaptations are not simple, single-gene characteristics; they are quite complex. So if we want adaptations to much cooler conditions, much hotter conditions, better drought tolerance, we are not going to get them by trying to pull single genes out; that disrupts the whole complex.”

So Falk is turning the tables on the problem. “I thought, let’s put in a single gene into wild barley, instead of looking for single genes to pull out of wild barley.”

His idea is to move the non-shattering rachis gene into wild barley lines. The big advantage of this trait is that it allows a researcher to manage the breeding materials with standard equipment, planting them with a planter and harvesting them with a combine. “And as soon as we start handling the materials using current mechanical means, the characteristics that support the modern domesticated complex will be automatically selected for,” he explains.

“For example, if some seeds have dormancy, the only ones you’ll be harvesting are the ones that did grow. You will automatically be selecting against the ones with high dormancy that didn’t grow. And only the ones that are easy to thresh will wind up in the seed bag; if they are not easy to thresh, they’ll go out the back of the machine.”

From idea to action
“Now that I’m retired, I don’t have any constraints on what I do or don’t do. So I decided to take on this re-domestication project. It is not expensive. It doesn’t require any technology other than some tweezers to transfer pollen. I have some funding in my account at the university to pay for growth room space, and I’m using some of the land on my farm for the field plots,” explains Falk. “The work is easy to do, but it takes time – I’ll need to backcross three or four or maybe five times to get the non-shattering rachis gene into the intact wild barley. Nobody else is doing it; they have too many pressures to do other things like teaching, research, breeding and so on. I’m interested in it, so I might as well do it.”

Falk’s first step was to contact his friend Dr. Brian Steffenson at the University of Minnesota, who has worked extensively with wild barley. He asked Steffenson to provide a set of wild barley lines that represent the full range of diversity in his collection.

“He gave me 14 different lines from 13 different countries. They cover the entire geographic range of wild barley from Morocco to Afghanistan. I have one from each country along the Mediterranean coast and into the Middle East, and two from Syria,” says Falk. “I’ve got lines from about 500 feet below sea level in Israel to about 4,000 feet above sea level in Iran. And I’m working on getting some wild barley lines from Nepal and Tibet that may be somewhat different from the ones that I already have.”

Falk received the 14 lines about a year ago. In the university’s growth room, he grew out those wild lines and some cultivated lines for crossing. Along with the non-shattering trait, the cultivated lines also have the male sterility trait. Falk explains, “I have used genetic male sterility as a crossing tool for my entire career because it makes crossing the plants so much easier [since it prevents self-pollination].”

He made the initial crosses last fall in the growth room and grew the first generation (F1) over the winter. The first segregating generation (F2) is growing in the field now. Once the F2 plants mature, he will select the ones that don’t shatter. Then he’ll backcross those with their original wild parent.

Falk is also planning to try using molecular markers for the non-shattering rachis gene. Using these markers would increase his costs, but it could make the selection process more efficient because he wouldn’t have to wait for the plants to mature to see whether or not they shatter. This would save time and space in the growth room and so reduce costs on that side.

“The backcrossing work will likely take about four or five years. If everything goes well, I’ll end up with 14 derived lines that are almost identical to the 14 wild lines I started with except that they will have the non-shattering trait and probably the male sterility gene as well,” notes Falk.

“However, I will likely not be able to carry all 14 lines all the way through. For instance, I might not get crosses with one background, or one of the lines might be highly susceptible to disease and might not produce seed from the field plots. But I should get at least 10 lines, and that will represent a dramatic increase in diversity compared to what we have now in cultivated barley.”

Having fun with a genetic treasure trove
Once he has created the re-domesticated lines, Falk will make them available to breeders, geneticists and other researchers around the world. “They’ll be able to plant and harvest them normally and cross them easily. So re-domestication will make a very useful population out of something that right now is hard to handle,” he says.

“It will open up a new set of materials that researchers should be able to utilize more efficiently. They can cross them with anything they want, expose them to the stresses in their growing region, pull out single genes, pull out more complex traits, try some very unusual combinations –have some fun. It’s something I wish I’d had 25 years ago.”

“So perhaps there is something in wild barley that combines well with domestic barley or releases variation or produces new variation that we just don’t see in normal crosses. I’ve made thousands and thousands of barley crosses and I have never seen anything like the variation that shows up when you cross with wild barley.”

To take the project even one step further, Falk plans to intercross the derived wild barley lines with each other to potentially release even greater genetic variability. “[For instance,] by crossing re-domesticated wild barley from Iran with re-domesticated wild barley from Morocco, genes will be brought together that would never have had a chance to interact before. This may give rise to unique plant types, grain quality types and adaptation potential that has never been seen before.  This is another unique opportunity made possible by this method of addressing the diversity issue in barley.”

Falk has already had enquiries from researchers interested in obtaining the re-domesticated lines. “An acquaintance of mine in Queensland, Australia, who studies starch said he would be very interested in looking at the starch profiles of these wild barleys because nobody has ever done it. He expects there will be some variation that might affect food quality, or feed quality, or malting quality in the derived lines.”

Since no one has tried re-domestication before, there’s no way to know how successful Falk’s project will be. “I’m taking three steps back and hoping that I can take at least one step forward,” he says.

However, he is optimistic that this approach will work because the genetics of barley are relatively simple compared to a lot of other crops and because the male sterility gene will make crossing much easier.

Falk adds, “If this works for barley, theoretically it could work for any other crop that has a wild relative, especially crops where the domestication characteristics are fairly simple and the wild relatives are fairly closely related.”