"Ug99” might not mean much to the world outside agriculture, but few wheat diseases have so much potential to devastate production – and ultimately, consumer access to a basic staple – around the world. 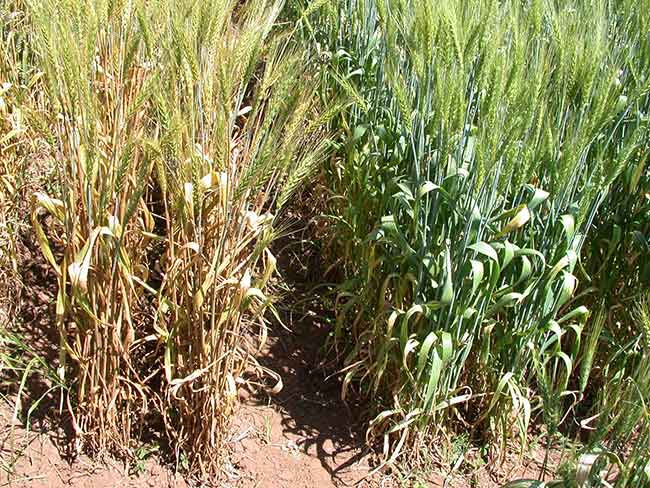 Of these two plots Ug99” might not mean much to the world outside agriculture, but few wheat diseases have so much potential to devastate production – and ultimately, consumer access to a basic staple – around the world.

The strain of stem rust, which includes 13 variants, has spread through Uganda, Kenya, Tanzania, Ethiopia, Sudan, Yemen and Iran. It hasn’t reached Europe or North America yet, according to Curt McCartney, a research scientist at Agriculture and Agri-Food Canada’s (AAFC) Morden Research Station, but the risk is daily compounded by international air travel.

Ug99 can cause up to 100 per cent crop loss. Here in Canada, the last instance of major crop losses due to stem rust occurred in 1954, when production dropped to nearly half in the Prairies, from projected yields of 487 million bushels to actual wheat production of 272 million bushels.

“The message here is that stem rust can be a major problem and that the genetic resistance in wheat varieties prevents these massive losses from occurring,” McCartney says.

Canada became a global leader in breeding resistance to Ug99 almost by accident in 2005, when AAFC stem rust pathologist and the Ug99 breeding project’s principal investigator, Tom Fetch, discovered that the variety AC Cadillac was highly resistant to the disease. AC Cadillac was one of more than 100 wheat and durum varieties Fetch had sent to Kenya’s Njoro nursery for testing.

This variety is the source of the gene SrCad, discovered by Fetch and AAFC wheat geneticist Colin Hiebert in 2009. Along with the variety Peace, which also contains the gene, AC Cadillac has been available to Canadian producers for over a decade.

Currently, McCartney, along with Fetch, Hiebert and a team of AAFC researchers, are working to sequence SrCad in a collaborative effort between AAFC, the National Research Council in Saskatoon and the University of Saskatchewan. This work has brought some major breakthroughs: the team recently published some new SNP markers for marker-assisted selection that can be used to develop Ug99 resistant varieties in breeding programs around the world.

Recently, the group released the Ug99 resistant variety AC Tenacious, which is also resistant to Fusarium head blight and tolerant to wheat midge. And more varieties are on the way.

“What we’ve done is compared DNA sequences between wheat lines that have the resistance and those that don’t, and that helps us to identify differences in the DNA sequences that could be useful for markers,” he explains. “To test that association, we look at the progeny from a cross between a wheat that has the gene and one that doesn’t, and as long as the marker and the gene are highly correlated we’re in the right spot.”

Right now, the team has their sights set on three DNA markers that show a very close correlation between the stem rust-resistant phenotype and the data from the inoculation. “We’re over 99.9 per cent right in these predictions, I would say. So then the final step for a breeder is to send the variety for testing with this race in a disease nursery in Kenya,” he says.

Work is also underway in the level-three containment lab in Morden, where Fetch leads the charge testing new varieties against Ug99 samples imported from Kenya.

To reach the samples, Fetch has to go through four doors and disable an alarm system before changing into clean scrubs. No chances can be taken lest any spores escape the lab, nor is there any room for complacency in terms of resistance.

“There are some other genes that we’ve discovered and we’re working on doing some molecular marker work to get some better markers linked to those. That would enable our plant breeders to use a variety of genes. The SrCad gene has been resistant for a decade, but the pathogen is always mutating, so you need to have more than just a single gene to rely on,” he says.

This summer, Fetch received renewal of his Bill and Melinda Gates Foundation grant to work on rust resistant varieties for an additional three years. Part of that work involves monitoring and surveying for the movement of Ug99 and new strains of Ug99 wherever the disease has spread.

Most of his work will focus on Kenya, Ethiopia and Eritrea, but Fetch works as part of a group with members spread across the United States, Australia, South Africa and Denmark. “We all work to help track its movement and determine if there are new strains of Ug99 forming,” he says.

“The most important asset for a scientist is having a healthy curiosity for how things work and don’t work, and how they change,” says Fetch. “In my line of work things change all the time, so you have to be on the ball and alert for differences in disease reactions that indicate something has changed.”

Of these two plots