Farming from the sky. 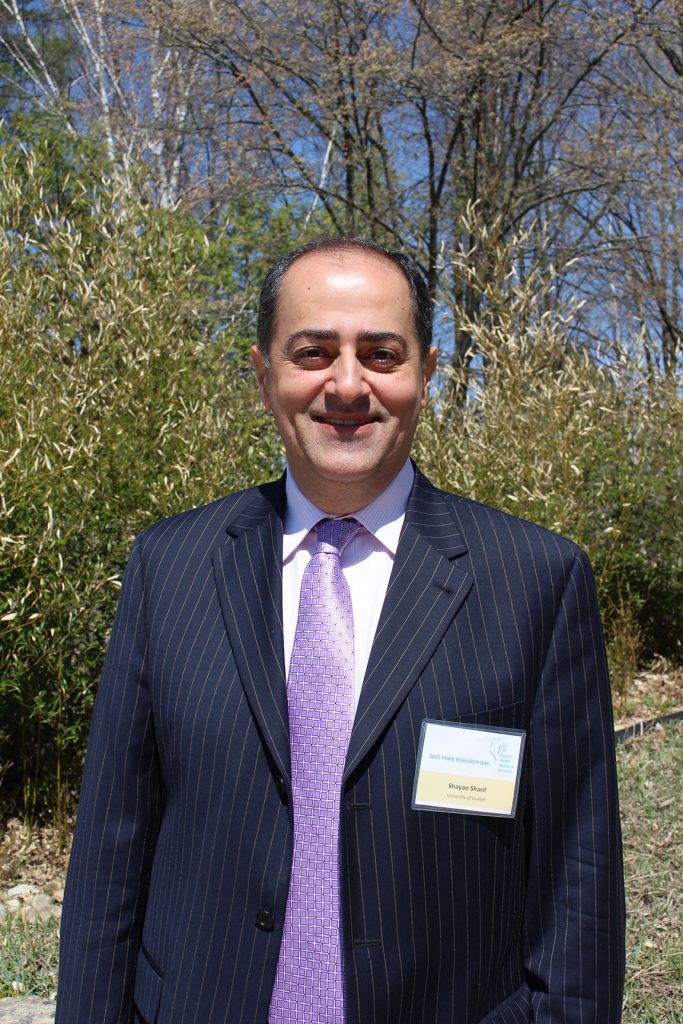 Shayan Sharif, immunologist with the Ontario Veterinary College at the University of Guelph.

Editor’s note: This article was originally published in 2017 as part of our Ag150 project, a week dedicated to highlighting past, present and future innovations and accomplishments in Canadian agriculture.

Here are some of the scientific and technological advances that will shape Canadian agriculture in the coming years.

The Internet of Things
This may be the most important tool on your farm in the 21st century, but it’s not really a tool at all. It’s more of a very large, weightless toolbox.

It’s known as the ‘Internet of Things’ (IoT), a phrase and concept coined in 1999 that refers to the connection of physical devices that are embedded with electronics, software, and sensors.

Many people have tools in the IoT toolbox without even knowing that toolbox exists. Farmers are already remotely monitoring their barns, fields and animals, and using their GPS technology from their tractors. But while the potential and the hype are considerable, there is a lot of work to do to move this implement beyond infancy.

Computer scientists Chandra Krintz and Rich Wolski at the University of California – Santa Barbara talk of a ‘SmartFarm’, where sensors collect, send, and act on data, gathering information that would help to make faster and more accurate management decisions.

In some cases, the computers themselves could be programmed to make those decisions without a human interface. They propose cloud-based software architecture that is widely available to all sizes of farms, easy to use, yet customizable. Their SmartFarm concept, “couples data from external sources with farm-local statistics, provides an interface into which custom analytics tools can be plugged and automatically deployed, and ensures that all data and analyses remain under the control of farmers.”

At the basic level, it sounds straightforward – it’s just fitting stuff with a sensor, isn’t it? But the IoT quickly grows into a complex beast, and while some proclaim that the IoT will change the way we live and work, others predict chaos.

A 2014 report done by Beecham Research, a market research and analysis firm that specializes in the connected devices market, acknowledges the huge task of bringing together a Smart Farming ecosystem of partnerships that may include technology providers, machinery manufacturers, and farmer themselves, as well as government support.

The IoT is necessary, say the Beecham pundits, to address the growing need for more agricultural production and better environmental stewardship with diminishing land and water resources.

They describe the technology as allowing an, “integrated, multi-dimensional view of farming activities, enabling deeper understanding on how the whole ecosystem works.”

Individual data could eventually become part of ‘big data’ – data sets that are so large and complex that traditional software is inadequate to process them.

Still, as the semantics continue to evolve, some formidable barriers are standing in the way: reliable rural broadband access, development of standards for sensor technology and software, and a continuing uncertainty of how to treat and safeguard data. Compatibility will be an issue: devices will need to speak the same ‘language’ to interface. Data will also have to be encrypted to ensure that hackers don’t take over your tractor.

Farmers have always been early adopters of technology but the Beecham Report, based on UK and U.S. data, indicates that the technology will be slow to grow in agriculture as compared to other industries, “because of the lack of vision shared by all stakeholders and their governments as to how to bring together the needs of agriculture with business opportunities.”

While a drone is a useful tool, it only provides a way to collect data. What you do with that data is up to you.

Flying doesn’t give you a solution, it just tells you where you need to look to make a decision. Do you only need to spray half of the field with fungicide or fertilizer? A UAV can guide you. Scouting for aphids? At 300 to 400 feet, you can’t tell exactly what’s going on. An image can help you to know where to walk but not all poor areas may be poor for the same reason.

A drone can be useful to monitor plant health early when there is still time to make a difference. Early detection of crop stress, relative crop biomass, crop health, or mid-season scouting can be performed through drone surveillance, supporting decisions based on ground-level field evaluation that includes soil sampling.

Say you have a winter wheat field that looks bad, should you replant it with corn? At first sight, it may look like a good idea. It’s a large field, though, so by using a drone to separate the field into sections, it became visible that some areas weren’t worth keeping while others only needed part-rate fertilizer to raise the overall average of the whole field. The value of this assessment can be realized in both lower fertilizer and replanting costs.

That is just one typical scenario where a drone can earn its keep, but there are a few other considerations besides cost. There’s the legal aspect too, with new rules in Ontario allowing a drone weighing less than 250 grams to fly at an altitude of under 300 feet if you’re five miles from an airport, larger drones may require compliance documents and you will also need aviation insurance that goes beyond normal liability.

In one study underway at the University of Guelph, researchers are using drone imagery to map the amount of nitrogen released by a red clover crop to more accurately assess the fertilizer requirements of the following corn crop.

New software is now being developed that has the ability to count plants, while another current trial focuses on developing vegetation index maps that describe the relative health and density of a crop. Drones are also starting to be used to provide field elevation maps.

The purpose of using a drone is to see things that you wouldn’t be able to identify or measure in any other way. You can’t manage what you can’t measure. In other words, a drone may just be a handy tool to have in the toolbox.

Genome Editing – Building a Better Bird
Can we build a bird that can resist disease? The answer is ‘yes’, but should we?

Shayan Sharif is an immunologist with the Ontario Veterinary College at the University of Guelph. He calls the fight against disease an “evolutionary arms race,” a conflict in which pathogens have successfully invaded over several million years.

“We keep trying better strategies,” Sharif says, “but they respond.” As he sees it, even the smallest virus has not only read our virology textbooks, they’ve written them.

Bacteria are developing resistance against antibiotics; viruses are becoming more virulent, neutralizing the immune response provided by vaccines. Some pathogens affect the animals while some also have implications for human health. Not only do we have to fight those pathogens, we have to keep them at bay.

Can new developments in genome technology provide a solution?
So far, our disease control strategies include management and pharmaceutical treatment, vaccines and biosecurity, but creating novel stocks of poultry through genetic modifications may just give us a leg up in the war.

In the last 25 years, great strides have been made into how the genetic makeup of poultry can influence their resistance to pathogens. A genome that used to cost millions of dollars to sequence over months, maybe years, now takes a couple of days and a few hundred dollars.

The Biodiversity Centre at the University of Guelph has the capacity to interrogate one million samples per week – “enormous capacity,” Sharif says, providing an opportunity that has not yet been utilized.

This same gene sequencing and mapping of poultry and pathogens has now been taken one step further, with researchers now exploring the genes of commensal microbes that are present on, or in, poultry in order to examine their relationship with the immune system of the bird and how that relates to disease resistance.

Despite this technology, the solutions have remained elusive. Part of the challenge is to develop the analytical and computational tools needed to process the large amounts of data being generated. Another complication is the complexity of the relationship between the bird and the pathogen.

The technology for genome editing has also made great strides in the last five years, giving what Sharif called a “ray of hope” to address issues associated with genetically modified organisms.

Transgenic salmon was approved for sale for food in Canada in 2016 and, in 2015, the U.S. Department of Agriculture approved genetically modified chickens for pharmaceutical production.

At the research level, the creators of Dolly the Sheep at Edinburgh University’s Roslin Institute have created a chick that presents a jellyfish green fluorescence to its beak and feet if it possesses a decoy molecule that will attract the bird flu virus, making it easy to identify the transgenic birds.

By combining genome sequencing and gene editing technology, it is now possible to select for robust traits in poultry, Sharif says, which can withstand infectious challenges and adapt more easily to changes in their environment while maintaining superior production traits. He also envisions using insights gained from the sequencing of the poultry genome to develop novel and more effective vaccines.

We have the genome sequencing; we have the gene editing. What remains now is to develop this technology to produce a better bird at low cost, readily available while remaining socially acceptable to the consumer.