The objective of variable rate fertilizer (VRF) application is to optimize fertilizer inputs for different soil areas within a field to achieve optimum crop production. Fertilizer rates and types are changed according to a preset prescription field map that is developed based on various types of mapping information.

Working with your agronomist, decide what the most important soil factors are that need to be delineated in your fields to identify site-specific management zones that have lower, medium and higher crop production potential. Some of the variable soil chemical factors include per cent soil organic matter levels, variation in soil pH, variation in EC (electrical conductivity, a measure of soil salinity), and SAR (sodium adsorption ratio, a measure of sodium in the soil). Some of the variable physical factors include variation of depth of topsoil, depth to subsoil, soil texture, soil water holding capacity, high water table areas or wet depressional areas.

Crop yield maps: Yield maps are generated when crop yield and geographic position data are recorded with your combine at harvest, and show high, medium and low yielding areas within each field. Yield differences are not always related with variable soil factors; they can result from variable disease, insect pressure or wet areas within a field. Yield maps may vary considerably from year to year, but combining yield maps over a period of years can be helpful to identify similarities.

Topography maps: Topography is often strongly related to soil differences and the effects of how variable soils have developed on variable landscapes. For example, hilltops and upper slope positions generally have lower soil organic matter, a thin layer of topsoil, shallow depth to subsoil and higher soil pH. Delineating upper, mid, lower and depressional slope positions are an excellent way to identify soil crop management zones. One of the best programs to generate a very good topography map was developed by Bob MacMillan (retired from Agriculture and Agri-Food Canada), called LandMapR. The image at top left shows a topography map developed from elevation data collected at harvest from a field near Lethbridge, Alta. The topography map very nicely delineates upper, mid and lower slope positions, which can be closely related to uniquely different soil areas.

Drone and satellite imagery maps: Near infrared (NIR) imagery by satellites or drones is used to assess plant growth during the growing season. Differences in reflectance from the crop canopy may be related to higher or lower relative biomass differences, which may be associated with higher or lower crop yield potential. Variability in weed, disease and insect pressure that are not related to soil variation can confound interpretation of imagery information. To successfully develop soil/crop zone maps, imagery from a number of good crop production years must be collectively utilized to identify areas within a field with consistently higher versus lower productivity. It is important to determine if the differences in biomass are related to differences in soil types and soil fertility, or other crop production factors.

Soil salinity maps: Slight to severe levels of soil salts in a field are a potential problem for crop production. Salinity maps can be developed using EM38 or Veris technology to determine if soil salinity is an issue in your farm fields. These technologies use electromagnetic inductance and emit an electromagnetic pulse that is reflected off soluble ions in the soil (e.g. sodium, calcium, magnesium, potassium, sulphate, chloride). The EM38 then measures the amount of the pulse that is reflected back, which is proportional to the amounts of “soluble salt” in the soil. The measurement is affected by and must be calibrated for soil temperature, texture and moisture.

Potential soil salinity problems are greatest in the Brown and Dark Brown soil zones in Alberta and Saskatchewan, and on irrigated soils. Areas of slight to moderate salinity are often impossible to visually see in the field. This is call “hidden salinity” where there is enough soluble salt in the soil to reduce crop yield but the soluble salts are not visible on the soil surface. Visible white salts on the soil surface do not appear until the soil EC level is about 10 dS/m (deci-Siemens/metre) but most crops will start to suffer a yield loss when surface soil EC is at 2 to 3 dS/m. A surface soil EC of < 1.0 dS/m is normal. A good salinity map is a valuable tool for VRF application if soil salinity is a problem in your fields.

Soil texture maps: Areas in a field with higher clay content have a higher water holding capacity and therefore are considered to have higher crop yield potential versus sandy soil areas in a field.  Some agronomists develop soil texture maps from information collected using EM38 or Veris field mapping technology. Each technology attempts to measure the apparent electrical conductivity of soil through the use of sensors as the instruments are transported across a field. The theory is that higher levels of soil ions in clay textured soils are better conductors than sandy textured soils, so clay soils give a higher sensor reading versus sandy soils. However, readings are also higher on wetter versus drier soils and when soil salts are higher versus lower. There is no way for these instruments to distinguish the causes of higher versus lower readings, so it is difficult for these technologies to be used to map soil texture in fields with even slight soil salinity, as the salinity will confound the interpretation. They also cannot be successfully used when soils are frozen because frozen soil moisture (ice) will not cause the instruments to respond in the same way as liquid soil moisture (water).

Soil organic matter and pH maps: Some machines utilize on-the-go mapping of soil properties such as pH and organic matter. NIR spectral measurements are claimed to correlate with soil organic matter, soil carbon, soil pH and soil moisture. In my opinion, considerable field research is needed in Western Canada to determine the accuracy before using these new sensors to map soil chemical characteristics. However, when properly developed and calibrated, soil organic matter and soil pH maps could be very useful in delineating soil/crop management zones. 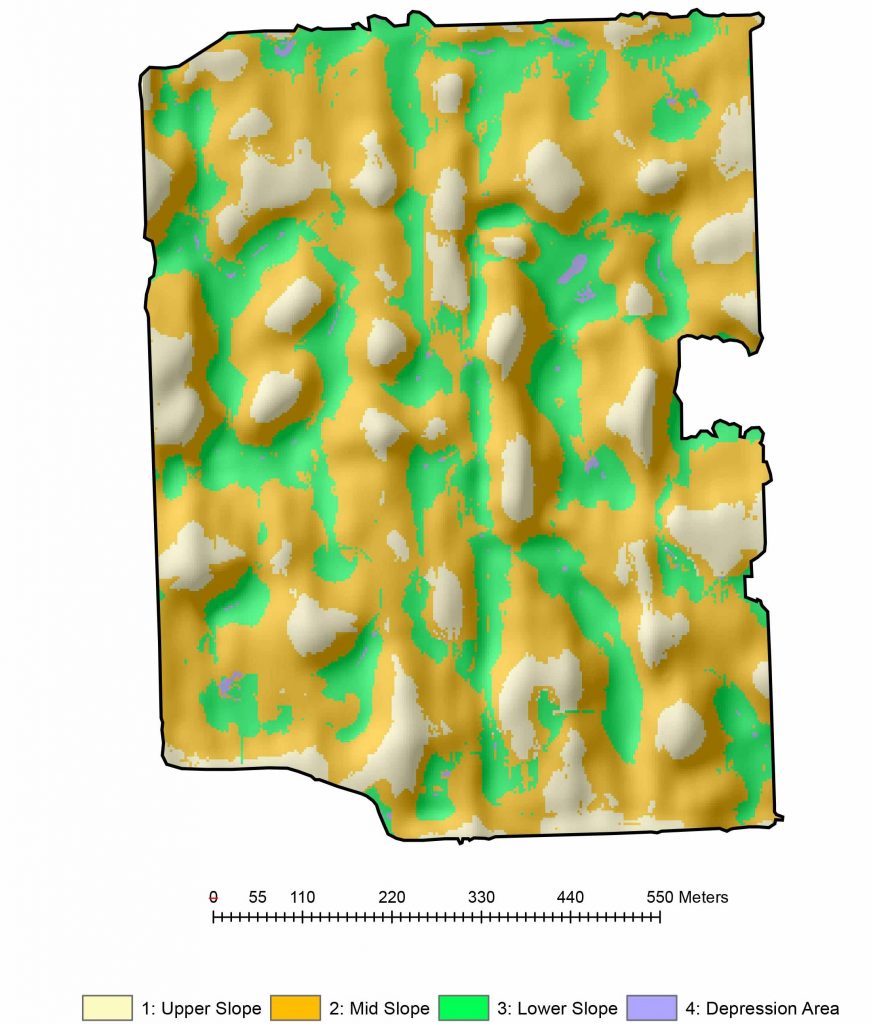 Topographic map of a field near Lethbridge The objective of variable rate fertilizer (VRF) application is to optimize fertilizer inputs for different soil areas within a field to achieve optimum crop production. Fertilizer rates and types are changed according to a preset prescription field map that is developed based on various types of mapping information.
Print this page