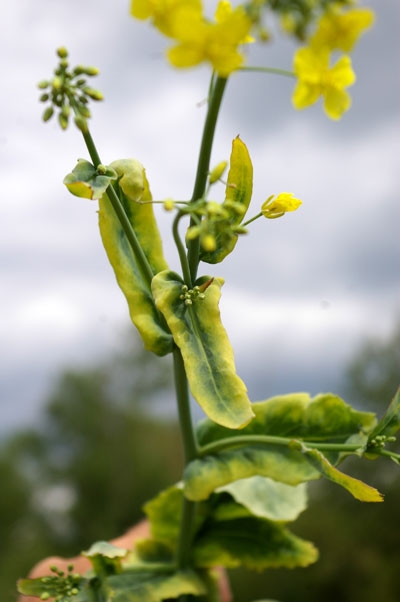 The field problems presented to Emile deMilliano, a certified crop advisor and manager of Agronomic Services with Viterra at Fort Saskatchewan, Alberta, was a head-scratcher. Symptoms of poor canola growth had been reported in a few fields in northern Alberta in 2009 around Mayerthorpe, and a few more in 2010. Whereas most showed minor symptoms, one field in particular at Lac La Biche in 2010 had about one-third of the field affected.

The symptoms showed up around the three to four leaf stage of Roundup Ready canola. In general, deMilliano says the symptoms included chlorosis of leaf margins, and cupping of leaves was evident. However, chlorotic mottling of the entire leaf (leaves) and overall stunting of plant growth were apparent in areas most severely affected. “Our first intuition was a sulphur deficiency, but we ruled that out,” says deMilliano, who worked with Rigas Karamanos, Viterra’s manager of Agronomy Services in Calgary. “As we worked through the diagnostics, it was certainly one of the most unique challenges we have encountered.”

Sulphur (S) was ruled out on the Lac La Biche field because a sufficient amount of ammonium sulphate was applied (more than 20 lbs of actual S per acre) in 2010. According to deMilliano, the field history indicated canola had been planted at least every two years and more than 20 lbs of S per acre in the form of ammonium sulphate were applied each time. The rainfall for the spring growth, four inches, was spread out across the two months of spring growth. This amount of precipitation was not adequate to leach the sulphur out of the rooting zone, says deMilliano.

Another clue in this classic case of crop diagnostics appeared when the field did get rain later in the spring, the crop came back to life, and while vegetative parts of these plants continued to exhibit symptoms, flowering and pod set appeared relatively or reasonably normal. The crop set seed, and matured normally. On the other hand, severe sulphur deficiency is evident with prolonged flowering, flower sterility and poor pod set.

Herbicide residue was also ruled out, after looking at herbicide application records. Next, deMilliano ordered up full soil and tissue test analyses, comparing unaffected and affected areas of the Lac La Biche field. “I wanted to look at all the parameters and make comparisons. I was looking for a correlation between symptoms and possible reasons,” explains deMilliano.

Soil pH provided another clue. The poor areas had strongly to very strongly acid soils, and at these levels, soluble forms of aluminum, iron and manganese can form. Below pH 5.5, aluminum and manganese can increase to toxic levels.

The symptoms tended to point towards manganese toxicity, as aluminum toxicity restricts root growth, phosphorus uptake and translocation within the plant. Manganese toxicity causes chlorosis of leaf margins and cupping of leaves in canola, explains
deMilliano.

Case closed
Based on the evidence, deMilliano and Karamanos believed manganese toxicity was the culprit. DeMilliano explains in a summary that “areas that appeared most affected during the vegetative stage (severe chlorosis and significant stunting), cumulatively amounted to a low percentage of the total acreage in the field. Areas with mild to moderate symptoms accounted for a larger percentage (maybe 10 to 15 percent of the field) but revealed fewer symptoms through the flowering and pod stages. This may be due to a ‘dilution’ of Mn concentrations with additional rains and slight changes in pH. The yield impact on these areas is more difficult to quantify but I suspect is far lower than initially expected.”

To correct the manganese toxicity problem, liming would be one tactic aimed at increasing soil pH.  However, the cost can be prohibitive, especially with debatable returns given the lack of information on yield loss due to Mn toxicity in canola in Western Canada. DeMilliano hopes to continue to monitor the situation, to assess yield loss, and determine the impact on rotational cereal crops. “Solving a case like this takes a process of elimination. You look at all the factors and try to eliminate the possible causes,” says DeMilliano. “While the process might be obvious, being able to compare good and bad areas of a field forms an excellent basis for investigating many crop diagnostic cases.”