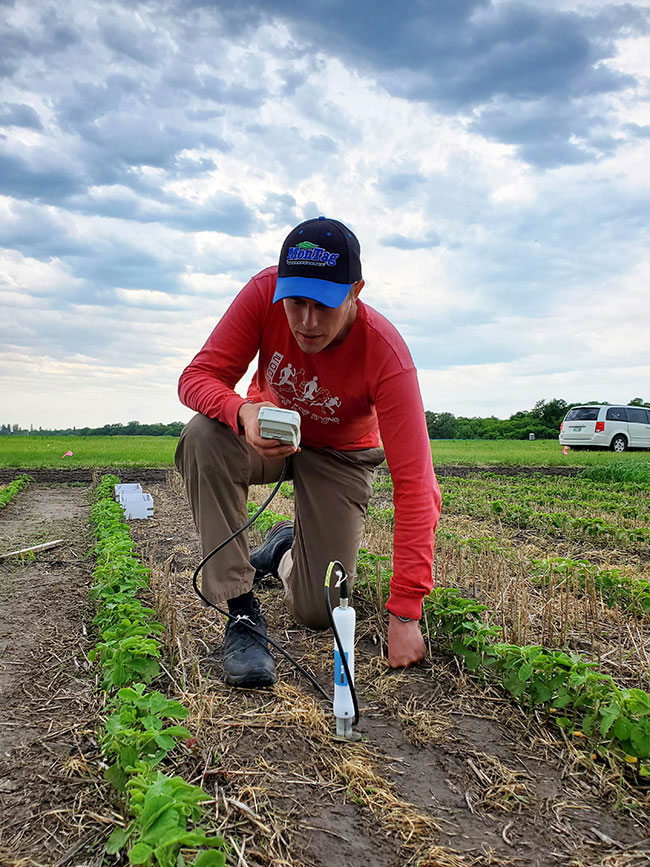 It started as a side project for Callum Morrison, a graduate student in University of Manitoba’s department of plant sciences: a small online survey of Prairie farmers measuring cover crop adoption.

Morrison, whose supervisor is agronomy and cropping systems professor Yvonne Lawley, was planning on-farm research and field trials to meet his degree requirements. When the pandemic hit, Lawley and Morrison realized they’d have to pivot, and the Prairie Cover Crop Survey project “grew arms and legs,” Morrison says.

When the first survey was conducted in 2019, 211 farmers from the three Prairie provinces responded.

“We decided to continue with the momentum and did a 2020 survey,” Morrison says. “We also took the opportunity to offer the survey to farmers that do not grow cover crops.”

This time, 528 Prairie farmers responded, of which 281 grew a cover crop in 2020. The same survey offered to Ontario producers gleaned more than 700 responses – the largest survey of its kind to take place in Canadian history.

Cover crops have sometimes been considered the purview of organic farmers or seen as a headache for growers dealing with a short growing season. At the beginning of the project, Morrison says a stakeholder group told him and Lawley that cover crops were too “niche” to merit a survey. “By the second year, I was able to say, look at all these people growing cover crops. We can prove that it is happening across the Prairies, and the farmers that we spoke to believe it’s working on their farms.”

The 2020 Prairie Cover Crop Survey had six main goals: to find out the extent of cover cropping in the three Prairie provinces, identify how and why they’re used, identify benefits and challenges to their use, discover barriers to adoption, and identify what could help farmers grow them.

“[It’s] an important time to hear from farmers about their needs for research and knowledge transfer. Farmers want to know how to use cover crops to meet their goals. Policymakers need information to design conservation best management practice (BMP) programs to meet environmental targets.

“Lack of information has been a major hurdle for farmers interested in adopting the practice and for developing policy to support cover crop use,” write Morrison and Lawley in their report.

Survey results
Morrison and Lawley call Prairie farmers who use cover crops “early adopters,” because most started using them within the last five years. 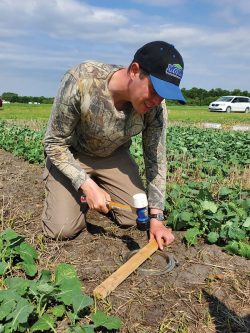 Callum Morrison hammering in a ring to take an infiltrometer reading at the long-term cover crop rotation study in Carman, Man.

Farms of all sizes and descriptions were invited to participate. The majority of respondents, says Morrison, were livestock producers, followed by annual grain farmers, organic producers and fruit and vegetable producers.

Morrison and Lawley received a roughly equal number of responses from farmers in Alberta, Saskatchewan and Manitoba. “Cover crops were grown as far north as the Peace River Valley in Alberta and as far south as the U.S. border, and included some of the driest regions of Alberta and Saskatchewan,” they write in the report. Manitoba grew the most cover crops, accounting for 46 per cent of acres followed by Saskatchewan (31 per cent) and Alberta (23 per cent).

The goal of each farmer in growing cover crops is linked to the benefits they observe, says Morrison. Eighty per cent of the survey respondents identified “improving soil health” as the primary reason for planting cover crops, followed by increasing soil organic matter (76 per cent), keeping living roots in the soil (65 per cent), feeding soil biology (65 per cent) and adding nitrogen (57 per cent).

The challenges farmers noticed included the short-season climate, trouble getting fall cover crops established with adequate moisture, and for a small number of farmers, cost of seed, and impacts of cover crop on herbicide choice.

Impacts
Morrison says the main benefit of the survey is that it confirms that cover cropping is practiced by many Prairie farmers, and that local, regional research efforts to support cover cropping are necessary. The survey is designed to “get the ball rolling” on research and complement on-farm trials. 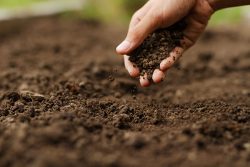 Of the 281 Prairie farmers surveyed who grew a cover crop in 2020, 68 per cent said they’d noticed boosts in soil health. Photo courtesy of AdobeStock.

“We [looked at farmer] adoption, how they’re using cover crops and their perceptions. Hopefully people will recognize this research is important to gauge appetite, but it’s also important to tie it into other research our lab is doing,” he says.

“The opinions of farmers and their experiences are really valuable. By identifying the problems, we can then research them, and other people across Canada can look at the challenges farmers are facing and how to get around them. Farmers want to know how they can be well-informed going into cover cropping, and mitigate risks.”

One sign that cover cropping is only going to increase in importance in the Canadian Prairies is the fact that not a single farmer surveyed said the old system worked better, even though they recognized some challenges to adopting the practice.

This means that for most farmers, it’s working.

Morrison says there are no immediate plans for a future survey, but he and Lawley would like to check in with Prairie producers in a few years once the practice has matured.

“What I love about this survey is that it helps bridge the gap between research and farmers. They feel detached from research. [But] all the data I’m using came from farmers,” he says. “Farmers can learn directly from farmers.”

The full results of the 2020 Prairie Cover Crop Survey can be viewed on the Faculty of Agricultural and Food Sciences MAKE Ag & Food Resources webpage (umanitoba.ca/agricultural-food-sciences/make/make-ag-food-resources#crops).

Ontario survey results
Morrison and Lawley conducted a sister survey in Ontario with the help of the Ontario Cover Crop Strategy Group (OCCSG) and Grain Farmers of Ontario. Of the 731 respondents, 520 grew a cover crop in 2020. The vast majority of those who grew cover crops – 91 per cent – said they’d observed benefits for soil health, reduced erosion, and increased soil organic matter. Visit topcropsummit.com to hear more from Morrison and Lawley about both the Prairie and Ontaraio Cover Crop surveys in exclusive video interviews.