New traits that protect corn yields during drought are an important advance. But what happens to yield if there isn’t a drought? What happens if delayed weed control puts stress on the emerging crop? 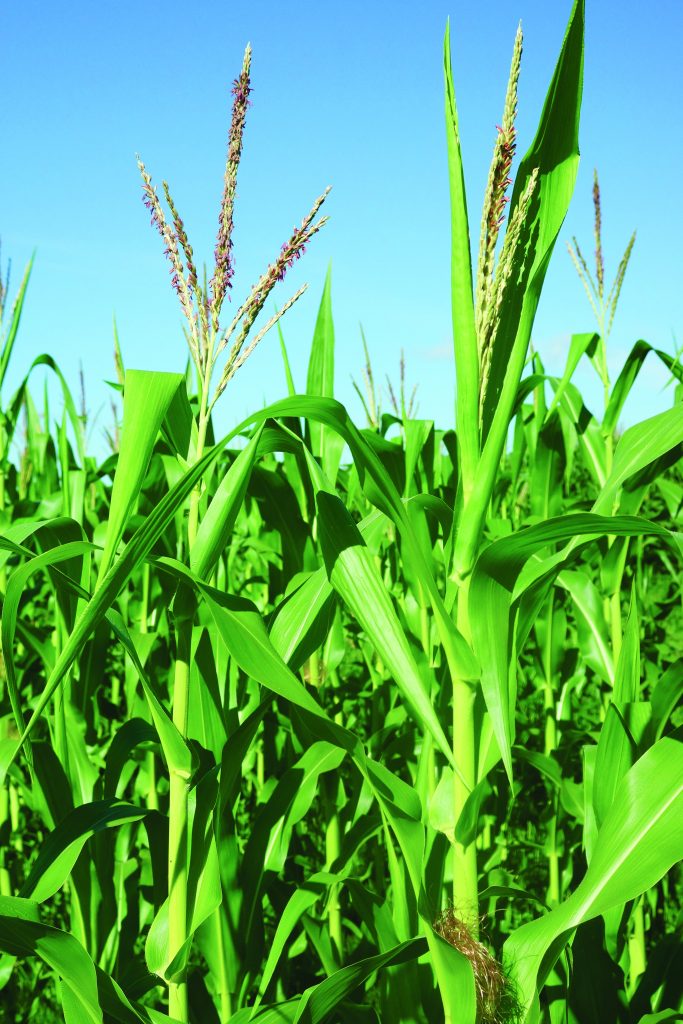 This corn is in the anthesis-silking interval (ASI). Silk is emerging along the stalks. Above New traits that protect corn yields during drought are an important advance.

University of Guelph professor Clarence Swanton asked himself those questions in 2010 while new drought tolerance traits were in testing programs.

With co-operation from Syngenta, he put together a research program conducted by graduate student Andrew Reid that answered the questions in 2012. It also provided a new insight into the nature of corn.

They were natural questions for the professor of plant science. Early in his career, Swanton focused on describing the outcome of crop and weed competition. More recently, he pinpointed the earliest responses to weed competition. His study, published in 2010, showed that yield potential is reduced if a corn coleoptile is shaded in the first day of emergence. Biologically, it adjusts the growth pattern to avoid the shade of any nearby weed. Internally, from that point forward, some yield potential is lost and not recoverable.

“Plants that expressed classic shade avoidance characteristics set fewer kernels per plant and partitioned less biomass to the developing ear,” Swanton wrote about the study in the Journal of Weed Research. “Shade avoidance also doubled the plant-to-plant variability in these yield parameters (i.e., kernel number and harvest index) without affecting the mean or frequency distribution of shoot biomass at maturity.”

In short, for an emerging crop, the change in light quality caused by nearby weeds is a form of stress with permanent impact on yield.

Stress stretches ASI
Very dry growing conditions can also be a form of stress. Other corn research has shown that a water deficit can cause yield loss up to eight per cent of the potential, per day, when it occurs during the flowering period.

Plant breeders have been using both traditional selection processes and direct genetic modification to develop lines of corn with more tolerance to drought stress.

As Swanton’s team of plant scientists began to examine new traits for drought tolerance from commercial breeding programs, questions emerged. From their previous work, they knew that shade avoidance is the first plant response to its environment, beginning on the day the coleoptile breaks ground.

“Knowing that the simple presence of a weed at corn emergence can influence the root structure of a corn plant, we wanted to test whether there was a chance you could lose the benefit of this novel trait in drought-tolerant plants, if you delayed your weed control,” he says.

Under normal growing conditions, about 50 per cent of the tassels (silk) emerge within three to four days after the anthers emerge. If stress stretches out that interval a few days, the plant loses non-recoverable yield potential. But, under similar stress conditions, drought-tolerant lines are able to maintain a near-normal ASI.

Without waiting for drought conditions, Swanton proposed to test whether stress from weed competition could influence the ASI.

His University of Guelph project received two nearly identical lines of corn from Syngenta. Field studies began in 2011 at Ridgetown and continued in 2012 at Woodstock. One hybrid was from the Agrisure Artesian technology; the other was a near-isoline without the drought-tolerant technology.

The Agrisure Artesian hybrid carried the genetics to maintain its yield longer in very dry conditions. It also had a shorter ASI.

Swanton obtained three site years of detailed data from the two locations. The team had tried seven different timings for weed control, monitored environmental conditions and made note of timing in growth stages.

The answers
So, to answer the first question about what happens to yield when there isn’t a drought, Swanton says, “We found that if you delay weed control, you lengthen the ASI period in both drought-tolerant and non-drought tolerant hybrids.”

And in answer to the second question – what happens if delayed weed control puts stress on the emerging crop? – he says, “We found that yield losses occurred with each delay in weed control timing, but no yield differences were observed between the two hybrids. This suggests that there was no additional physiological cost associated with the drought-tolerant traits.”

“We argued that if you delayed your weed control, particularly in the drought-tolerant one and increased this ASI period, you would lose some benefit of the technology,” Swanton says.

“The take-home for the grower is that, if I am interested in having this novel technology, I need to be aware that the way I manage weeds can potentially influence the effectiveness of the trait.”

He says, “Weed control timing can influence the length of ASI, which is an important drought-tolerant trait. To fully
benefit from a novel trait, be aware that early season weed control is very important. Any weed competition, from the day the corn coleoptile breaks ground, will rapidly reduce yield and may limit the effectiveness of drought-tolerance traits.”

The biochemistry is such that, it would apply to any corn anywhere. In theory, it may apply for trait expression in other crops such as canola and soybeans.

“The principle of early season weed control is important across all cropping systems. Corn is the lead for novel trait
expression. If you need the novel trait to be present, it’s probably relevant in canola and soybeans, as well,” he says.