Custom grazing can be a win-win for crop and livestock producers. 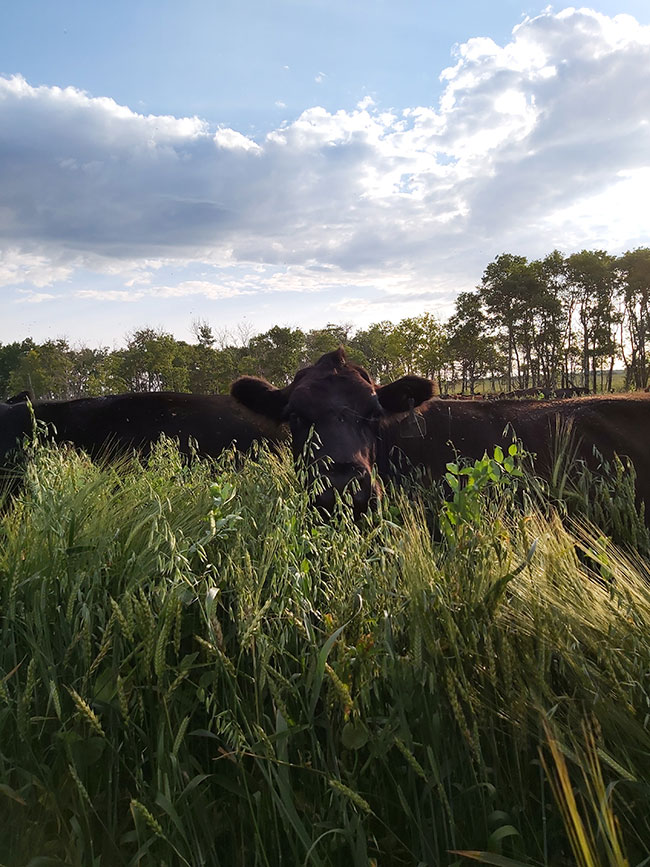 With a dry, cold spring, a hot, dry summer and a wet harvest season, 2019 was a disastrous year for Manitoba hay production, says Mary-Jane Orr, general manager at Manitoba Beef and Forage Initiatives. In the face of feed shortages, some farmers were forced to disperse their herds.

One collaborative approach has benefits for cattle and grain farmers alike: custom grazing fall cover crops. For livestock producers, such an arrangement can be part of a diversified strategy for maintaining herd size. For grain farms, adding livestock can improve land use efficiency and soil biology.

Jillian Bainard, a forage research scientist for Agriculture and Agri-Food Canada (AAFC) in Swift Current, says that as regenerative agriculture principles hit the mainstream, interest has grown in custom grazing in Western Canada. During a webinar for the Beef Cattle Research Council (BCRC) last March, Bainard asked participants whether they’d have interest in partnering with another producer to utilize cover crops for feed.

Thirty-two per cent of respondents selected “Yes – I would like to work with another farmer to offset some of the operational needs of either the cropping or animal needs.” (Sixty-eight per cent responded that they would rather use their own resources.)

Bainard is the lead on a new integrated crop-livestock study that aims to analyze how grazing annual forage cover crops compares to a typical annual crop rotation without cattle. The study, which is funded by AAFC, BCRC and Manitoba Beef Producers, will look at how these diverse systems impact soil health (for example, nutrients, microbial communities and soil aggregation) as well as weed communities and general productivity. Bainard’s collaborators will also consider economic outcomes – whether or not crop-livestock integration can improve a farmer’s bottom line.

“With growing trends in regenerative agriculture or conservation agriculture, we’re really recognizing just how much we can improve our soil through sound cropping practices and keeping cover or relay crops growing as long as possible,” Orr says. “There are a lot of good reasons to keep plants growing longer. But then what do you do with that cover crop, if it’s in addition to your cash crop? Do you spray it, do you till it back in?

“That’s where livestock integration has a huge window of opportunity to increase your return on investment if you’re seeding cover crops.”

Practicalities
Derek Axten runs a diversified grain operation in southern Saskatchewan. For a few years, Axten has been working with neighbours Ryan and Leanne Thompson, who run a beef operation called Living Sky Beef, to get cows on his land through the fall and winter.

Orr says the biggest limiting factor for many producers interested in custom grazing is the capital investment in fencing and clean water infrastructure – every pasture has to have either a dugout or a pump and trough – but Axten says much of the infrastructure already existed on his land due to the number of mixed farms in the area.

The Axtens’ farm was originally mixed, and they were already used to fall-grazing their land, he says, so it wasn’t a big leap.

That’s not to say it isn’t a complex arrangement, and Axten cautions that for partnerships like theirs to work there has to be good communication from the outset.

“I think where these things go wrong is that there’s no real clear communication,” he says. “Everybody likes to assume.”

The Thompsons plan their year’s grazing in the spring, so if Axten needs to make changes to the arrangement he lets them know then.

The extra administrative work is worth it from Axten’s perspective.

“If we can have livestock on our land it’s definitely better,” he says. “They’re cycling nutrients and cleaning up messes, weeds around the outside of fields and around rock piles. They’re making use of things we wouldn’t make use of. And if the combine has made a pile, the cows level that out too.

“If we seed a fall-seeded cover crop and graze it, we typically get our seeding and seed costs back. As long as we manage the amount of time the cows are out, I think it’s a win.” 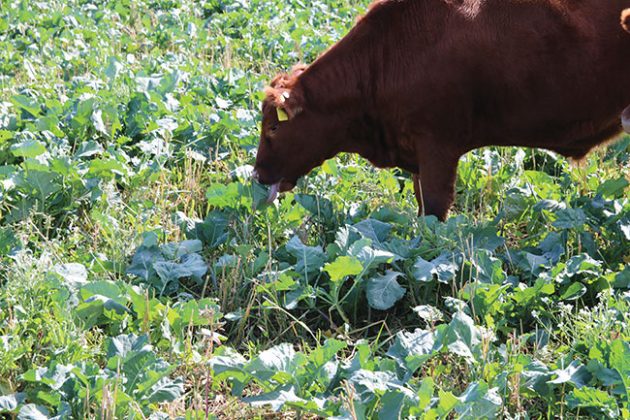 Steer grazing a forage Brassica in a diverse annual crop at the Swift Current Research and Development Centre.

Connecting farmers
Don Flaten, a professor in the department of soil sciences at the University of Manitoba, says that from a nutrient cycling standpoint, crop-livestock integration makes a lot of sense.

Cattle only remove a small portion of the nutrients they eat from the field. In research Flaten’s team has done, they’ve found that cows remove less than five pounds of phosphorus per acre, even with an intensively managed herd of background steers.

“At least 90 per cent of the nutrients that go in the front end come out the back,” he says. “This is one of the benefits of a grazing system, that you leave a lot of nutrients on that field and remove relatively small amounts of nutrients compared to the complete harvest of a crop in the form of hay or grain.”

A dairy farm near Rosser, Man., that Flaten has worked with has swapped land with grain and oilseed neighbours. More typically, many grain farmers incorporate liquid manure from local livestock operations onto annual cropland.

How do grain farmers find livestock farmers to partner with?

Flaten says in Western Canada that often depends on community relationships and the level of trust between neighbours. But for neighbours who don’t know each other well, a formal contract can be a helpful starting place in negotiating the terms of the agreement.

Further afield, South Dakota has a system called the South Dakota Grazing Exchange, which shows a map overlay with fields available for grazing, as well as livestock producers looking for grazing sites. No such tool is currently available in Western Canada but Orr says that, given enough interest, it may eventually become a reality.

For now, Orr recommends that grain farmers without immediate livestock neighbours who are interested in working with a livestock operation should get in touch with regional directors of the provincial beef associations or with provincial agriculture ministry representatives. For general information on these systems, researchers like Bainard are a good resource.

Axten says farmers might be surprised by how profitable custom grazing can be for their operations. “The biological benefits aside, it can add up to a lot.”