There’s gold in those trees. 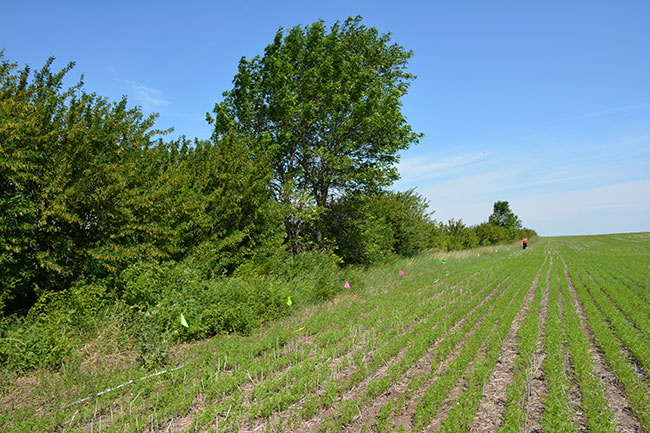 Once promoted and valued as a soil conservation practice, shelterbelts are being ripped out to accommodate larger farm equipment. But a new Shelterbelt Decision Support System developed at the University of Saskatchewan is putting potential value on shelterbelts in the hopes that it might give pause before the bulldozers come out.

“When we asked farmers why they are taking out shelterbelts, they would say that they don’t see any benefit; that shelterbelts are just in the way of farm equipment, and are taking land out of production,” says Colin Laroque, an environmental scientist in the USask College of Agriculture and Bioresources. “Economically that makes sense, but we’ve also done a lot of research that indicates that shelterbelts sequester a lot of carbon that has value. We wanted to get that information out to farmers and policy makers in an accessible format.”

Shelterbelt planting first started in 1903 as a means to protect farmsteads with windbreaks. It gradually expanded over the past century into field shelterbelts to also help prevent soil erosion, reduce evapotranspiration, and improve crop yield. Planting was encouraged by the Federal government’s Prairie Farm Rehabilitation Act (PFRA), and usually spiked in post-drought years. Plantings have dwindled since the PFRA Tree Nursey was shut down in 2013. It was first established in 1901 and had distributed over 650 million trees across Western Canada at no cost to farmers.

Until recently, an estimate of how many shelterbelts existed wasn’t available. Using satellite imagery and Google Earth, Laroque’s team came up with a number of 63,000 kilometres of shelterbelts in 2016 in Saskatchewan. There was no way of comparing that to historical numbers, but it is definitely lower than in previous years.

Laroque and a large multi-disciplinary team of climate scientists, economists, soil scientists, and computer scientists developed the Shelterbelt app to better estimate the carbon captured in shelterbelts, both above and below ground. He says there is as much carbon below ground in the roots as there is in the trees above ground. The group was granted $1.4 million by Agriculture and Agri-Food Canada in 2018 as part of an effort to reduce greenhouse gases in agriculture.

In the app, landowners can calculate how much carbon will be sequestered in trees planted in shelterbelts, and estimate how much carbon is captured in existing shelterbelts based on the age and tree species. A planning tool guides farmers on new shelterbelt plantings. The dollar value of a shelterbelt is based on a combination of the amount sequestered and the value of carbon offset value under the carbon tax system. The carbon offset mechanism is still in development.

However, the carbon tax is set at $50 in 2022, and is increasing by $15 per year until it reaches $170 in 2030. With the increasing carbon tax, and policies around carbon credits unclear, shelterbelts are likely increasing in value over time. Newly planted shelterbelts don’t sequester much carbon until after five years, with the first five years really devoted to root establishment. After five years, carbon sequestration is fairly linear for many years until growth slows as the trees age.

“Under the carbon credit system, shelterbelts are money in the bank. Every year, it keeps growing in a saving account,” Laroque says.