Buck Ross has had a good year. "We’ve got bin-buster crops,” he says. “Our wheat this year ran over 150 bushels per acre, so much it’s hard to believe it. We had well over 98 or 99 per cent germination in our corn. And our soybeans – I’ve never seen so many bean pods on the plant in my life.”

It’s a surprising result, given that Ross, a farmer based in Arthur, Ont., and owner of the biogas company Ross Enterprises, spent the summer waiting for rain like every other Ontario producer. But Ross believes there’s a simple explanation: these crops were part of a commercial study he instigated last year, looking at the impact of slurry seeded cover crops on soil health, water retention and the soil microbiome, and crop yield the following year.

Put simply, the cover crops, planted along with digestate sourced from municipal waste, created prime conditions for this year’s crops.

Ross is intrigued by the system for environmental as well as business reasons – or rather, the two are intertwined. Healthy soil creates healthy crops, he says, and agricultural producers play a huge role in carbon capture. “If we improve soil organic matter by 0.4 per cent we will capture over 15 billion tonnes of greenhouse gas,” he says. “Cover cropping is one of the methods of doing this.”

Not only does cover cropping improve the environment, but it also improves the value of the land, and that value stays close to home.

“Every dollar we don’t spend importing fertilizer gives the Canadian economy a lift,” he says. “If you send money out of the country it’s just gone. If you put
money in at the bottom it will get to the top.”

It’s a philosophy that has a lot of buy-in from Ross’ community. The project saw investment of seed, time and professional resources (if not financing, which came from Ross himself) from Bio-En Power, Bartels Environmental, Cargill, FS Partners, Grand River Conservation, Pioneer Seeds, Speare Seeds and the Ontario Seed Company. Christine Brown, field crops sustainability specialist with the Ontario Ministry of Agriculture, Food and Rural Affairs (OMAFRA), helped with the study.

How digestate-based cover cropping works
Bio-En Power, Ross’ partner, is responsible for generating most of the power for the city of Elmira, Ont. The company’s biogas plant diverts over 70,000 metric tonnes of organic waste from the landfill sites annually, and uses it to generate electricity. “What’s left is the digestate,” he says.

The digestate is a “well-blended, balanced, nutrient-rich” and pasteurized byproduct of anaerobic digestion, a process that captures the methane from waste for energy. It is also a fertilizer product that can be injected directly into the soil at key points in the season, explains Ross.

Last year’s study involved planting a multi-crop cover crop mix after wheat on three fields (700 acres) of Ross’ operation. Half the strips were treated with digestate, the rest without, and planted at different times depending on wheat harvest.

One overarching goal of the study was to look at opportunities for applying municipal waste during the growing season to extend the application window.

Brown’s interest in the study was twofold: she looked at the differences in root system biomass between the two strips, as well as ammonia losses from digestate with high pH levels. Her observations of the trial confirmed her assumptions in a few different ways.

According to Brown, every anaerobic digester has a different “recipe” of ingredients that affects the analysis of the digestate, including pH. One key observation from the study was that volatilization of nitrogen into the air as gas happens more quickly when manure or digestate has a high pH. It’s an important finding because of its direct agronomic implications where immediate incorporation is required to minimize nitrogen losses.

PH is not typically tested for in a manure analysis, but “sometimes farmers talk about their corn crop running out of [nitrogen] N and I wonder if that happens, in some cases, when the pH in the manure is higher than expected,” she explains.

“So if a farmer says they’re going to apply a high pH manure or digestate and incorporate two days later, if you’ve got a material with a high pH, then you might not have very much left at the end of two days relative to a manure with a lower pH.”

“If they’re at the surface they’re not doing much, but if you plant a cover crop you’ve got a lot more microbial activity at the root system,” she says.

There are more agronomic implications from the study. Brown also noticed that when an eight-species mix of cover crops was planted without digestate, all of the root systems demonstrated improved growth – “the diversity made a bigger difference,” she says. But when the eight-species mix was planted with digestate, the grass and radish species in the cover crop mix took over. “The bottom line is that if you’re applying digestate to a cover crop, don’t waste your money on eight different species, because a couple of those species will dominate. You may as well save your money and stay with the dominant species,” she says.

A small plot research trial initiated this spring near Arthur is evaluating digestate and municipal biosolids application at different opportunities during the growing season, including application with various cover crop mixes.

Results from Ross’ trial last year were not quantified, but the trend showed an increase in plant and root dry matter biomass of about 30 per cent where cover crops had digestate applied. Ross will continue the study “for the next several years” to evaluate its practical impact on his operation.

It’s work he believes is incredibly important, and he’s not alone in that conviction. But without credit where credit is due – and government incentives – farmers are unlikely to adopt similar measures, he says. “Farmers get blamed for a lot of stuff but we get no credit for what we do. This actually makes the world better.” 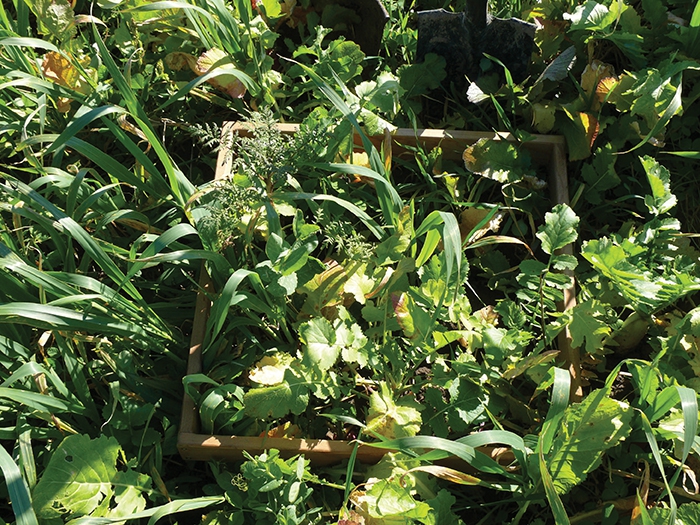 When the eight-species mix was planted with digestate