Research identifies some of the plant species involved in leafhopper-aster yellows-crop disease system. 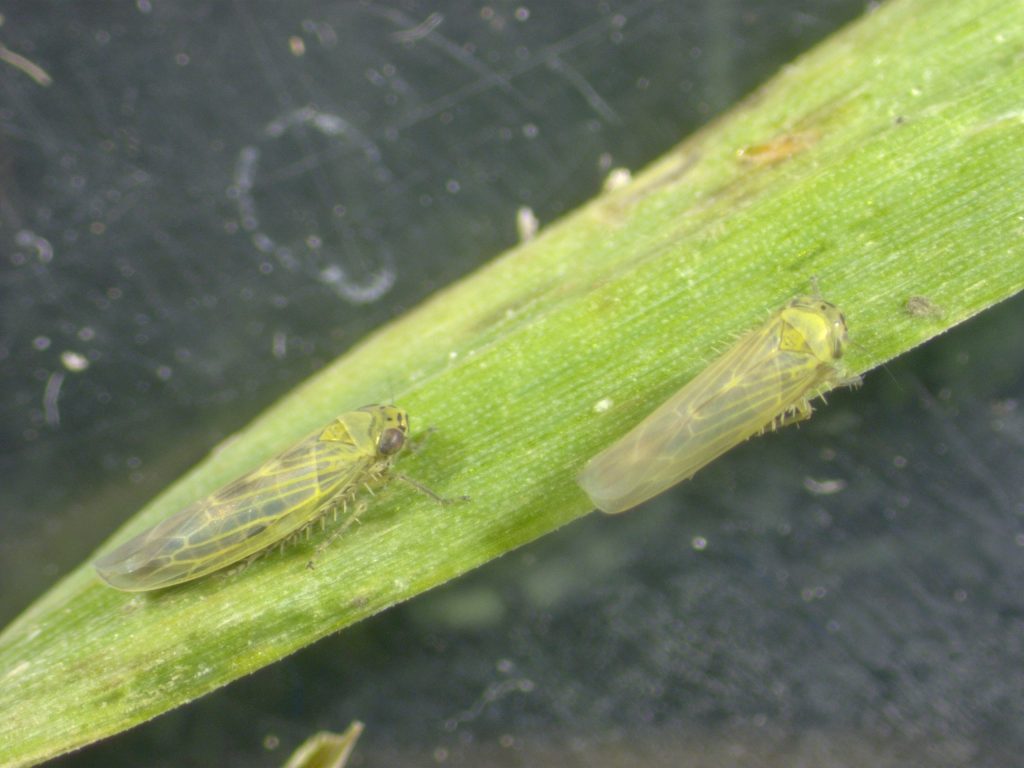 Aster leafhopper adults prefer to settle on cereal plants. Both adults and nymphs can vector the phytoplasma that causes aster yellows disease in Prairie crops. Photo courtesy of Berenice Romero.

Researchers are now a few steps closer to understanding how aster yellows (AY) outbreaks erupt on the Prairies. Two recent studies published by Berenice Romero, PhD student with the department of plant sciences at the University of Saskatchewan, have zeroed in on a missing part of the aster yellows puzzle: which Prairie plant species are suitable food and reproductive hosts for aster leafhoppers, the main vector of the phytoplasma that causes AY.

“The Prairies experienced some aster yellows outbreaks in canola so we wanted to look into why these outbreaks were occurring in the first place. But no research on leafhoppers in this geography exists, so we first needed to see which plants the leafhoppers would feed on. Because leafhoppers are polyphagous and feed on multiple plant species, we also needed to try to identify which plant species they were moving between in order to better understand their feeding behaviour when transitioning from wild plants to domesticated crop species, like canola,” Romero explains.

Aster yellows in a canola plant at harvest time. Photo by Jennifer Bogdan.

Aster yellows can affect approximately 200 different plant species. In canola, infected plants show excessive branching, clusters of flattened, bladder-shaped pods, and poor seed production. Symptoms in cereals can include leaf chlorosis and distorted heads. Only 30 out of the more than 1,000 species of leafhoppers in Canada are vectors of phytoplasmas, and only one – the aster leafhopper (Macrosteles quadrilineatus Forbes) – is the primary culprit for transmitting the AY phytoplasma on the Prairies.

Aster leafhoppers are migratory insects blown into Western Canada on winds from the southern U.S. When they arrive, they drop from the sky and are left to decide which plants in their new environment will become their chosen hosts for feeding and egg-laying. Depending on the timing of their arrival, annual crops such as canola or cereals may not have emerged yet, leaving the leafhoppers to find sustenance in non-crop plants. Romero’s research aimed to identify some of the more common Prairie plant species that might become preferred host plants for these migrant leafhoppers. Specifically, she selected dandelion, annual fleabane, and spiny annual sowthistle –  all commonly found plants within the Aster family – as potential host species.

Cereals are the chosen ones; canola makes a poor host

When it came to picking a host plant for either feeding or egg-laying, the leafhoppers chose oat, barley, and wheat over any other plant species offered. “Even in the presence of a second plant species, cereals were preferred over other plants, confirming these crop plants are suitable hosts for leafhopper oviposition and development,” Romero says.

Despite AY being commonly associated as a canola disease, leafhopper growth and reproduction were significantly reduced on this plant, and canola was deemed to be an unsuitable host for aster leafhoppers. So, if leafhoppers do not like canola, then why do we tend to see so much AY in this crop?

Romero explains: “We observed that canola was not a good host when it was presented as a single option, and something similar happened with sowthistle. However, this changed completely when a second plant species was introduced, as there were cases in which canola was preferred for settling over other plant species. Even if a plant such as canola is not a preferred host for an insect, it is still possible for that plant to become infected with a pathogen if the insect accesses the phloem and salivates into it for a certain amount of time. Another factor contributing to disease development has to do with how that plant responds to that particular pathogen. Canola itself is more susceptible to the AY phytoplasma and the infection takes over the plant fairly quickly. So it is possible that leafhoppers are able to spend enough time on canola to transmit the AY pathogen, and due to the faster activity of the pathogen on canola specifically, we can see more AY in this plant species compared to other plants.”

In addition, Romero’s research showed that dandelion and fleabane made adequate food and reproductive hosts, with leafhopper nymph development on these plant species similar to that observed in the more preferred cereals. Since little can be done to control leafhoppers in an attempt to curb the spread of AY in a field situation, knowing which host plant species are acting as bridge plants can be useful for managing the disease. Ensuring good management of weeds such as dandelion at post-harvest and pre-seed timings can help remove these alternate leafhopper and AY host plants. Romero also suggests monitoring fields for the migration of aster leafhoppers, and removing any infected plants as soon as they are identified in the field.

”One aspect about the weed species to keep in mind is that some can be good hosts for leafhopper reproduction and development. This means that these plants can potentially sustain a leafhopper population long enough until more suitable hosts become available. Additionally, if these weeds are infected, leafhoppers could possibly acquire the pathogen from them. Another aspect is that weeds can potentially bridge AY infection between seasons, which is why removing infected weeds from the field is important,” she advises.

While a lot of new information on how leafhoppers spread AY into Prairie crops has been gained, Romero continues to conduct experiments on the symptomology and timing of AY infection in cereals, attempting to fit more pieces into the AY puzzle.