With incidents of Asian soybean rust on the rise lately in the southern United States, the Ontario Ministry of Agriculture and Food (OMAF), along with Agriculture and Agri-Food Canada (AAFC) and the Grain Farmers of Ontario, will be watching closely to see if spores make their way across the border.

Early monitoring is key, and Ontario has been part of the North American early warning system from Day 1, says Albert Tenuta, field crop pathologist at OMAF. “The whole system consists of real-time assessments and detections of soybean rust in the field, starting from overwintering potential to early spring conditions,” he says, which will help predict the risk of the disease to Ontario producers.

According to the North Central Integrated Pest Management Centre (NCIPMC) in the United States, Asian soybean rust spreads through spores, which are released into the air if exposed plants are disturbed. Winds can carry spores great distances, a problem especially during hurricane season. P. pachyrhizi is capable of infecting over 90 species of legumes. Kudzu, which is widespread throughout North America, is one of those hosts, serving as a reservoir for the fungal pathogen.

Once infected, the lower leaves of the plant begin to show small lesions, which gradually increase in size as the fungus progresses. The lesions change in colour from grey to tan or reddish brown, and appear on the underside of the leaves. While they appear most commonly on leaves, lesions can also occur on petioles, stems and pods. Once pod set begins, infection can spread rapidly to the middle and upper leaves.

Soybean rust’s presence is strongly determined by environmental conditions. Milder temperatures and rainfall provide the right environment for the fungal pathogen to reproduce. The fungal pathogen prefers prolonged periods of moisture, particularly leaf moisture, and temperatures between 15 C and 30 C. The spores require humidity levels of 75 to 80 per cent for germination and infection. Under the right conditions, pustules will form within five to 10 days, and spores are produced within 10 to 21 days.

Early on in the season, the focus is on the southern United States, where risks are assessed throughout soybean production areas. As of mid-August, 2013, soybean rust has been scouted for and confirmed in several states, including Florida, Georgia, South Carolina, Arkansas, Alabama, Mississippi and Louisiana. Kudzu, in particular, is monitored throughout the Gulf States from Texas to Florida and as far north as Ontario. The warmer the temperatures, the more the greening of the kudzu thrives and survives. Rust infection can survive on the leaves throughout the winter.

“Kudzu is the overwintering host in North America where soybean rust has established itself,” says Tenuta. “It does overwinter in the U.S. Gulf States from year to year, so it is a yearly issue.

“If you have a cold snap where temperatures go below -2 C for a few days or so, which causes the kudzu to defoliate or lose their leaves, then that substantially helps us in terms of reducing our risk because the rust has to re-infect the new developing leaves and the new growth, so it takes a bit more time to build up inoculant.”

Fortunately, in recent years there have been cold enough winters that have resulted in just that. “This past winter is probably a good example of what potentially could result in more overwintering of the kudzu in the southern United States,” says Tenuta.
“And what we’re starting to see into late July and the beginning of August is considerable movement of soybeans, as well as kudzu, from Florida up into Arkansas and Georgia and those areas. Potentially,
we may see that move into maybe Tennessee, Kentucky and beyond.”

Ontario has been proactive when it comes to preparing for Asian soybean rust, though. As part of the network, soybean plants are assessed on a weekly basis, not just for soybean rust, but for other diseases as well.

“We also, in conjunction with Ag Canada in Ottawa and the Grain Farmers of Ontario, continue to collect rainfall that can be assessed for soybean rust spores,” says Tenuta. “More than likely what we’ll see with the buildup in July is that spores will migrate and make their way into the province. The good thing, though, is just because spores make it into the province, as we’ve seen for most years, it doesn’t necessarily mean that that infection will occur. You still have to have the right environmental conditions, and you have to have enough of the spores coming up to be of concern.”

Breeding efforts increase
With the assistance of the public breeding programs, in particular those at the University of Guelph and Agriculture and Agri-Food Canada, breeding efforts have been put into place, incorporating soybean rust resistance and tolerance into commercial soybean varieties. A number of promising lines have been tested under significant soybean rust pressure in Florida in co-operation with the North Central Soybean Research Program and the Soybean Rust Coalition here in Ontario. Researchers have been able to identify some lines that could assist in incorporating soybean rust resistance and tolerance into commercially available soybean lines, which are in development now. Private companies have been doing the same, but as breeding takes time, it could be a few years before those lines are commercially available.

“Progress has been made,” says Tenuta. “Resistance and tolerance, in conjunction with fungicides that are available, as well as scouting and detection, put us in a very good position to manage anything that comes up, from a soybean rust standpoint.” 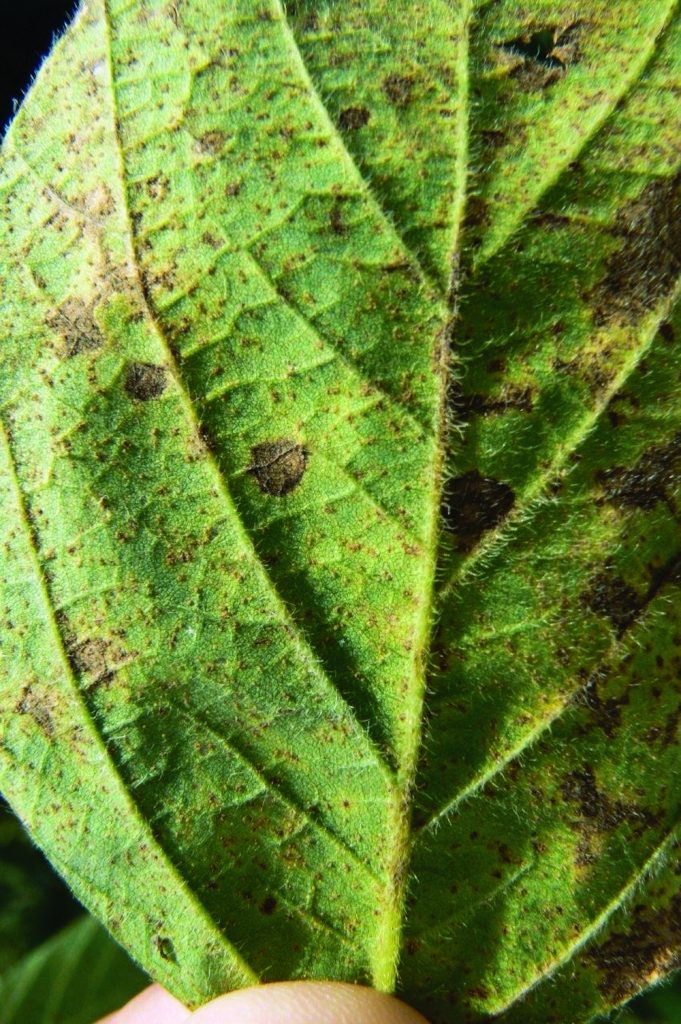