The answer can get murky. 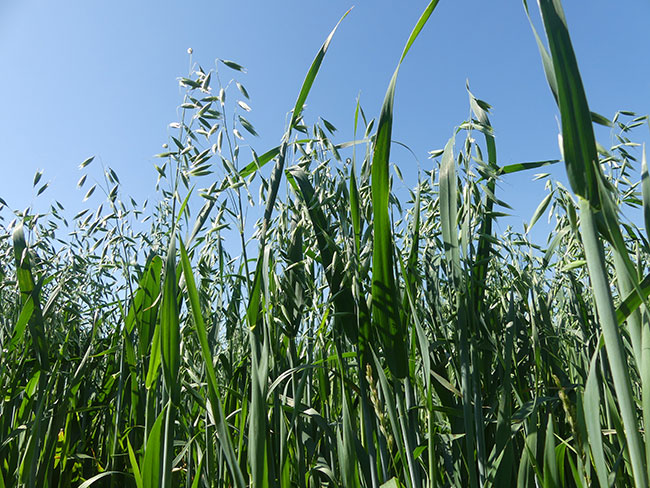 With wild oat herbicide resistance on the rise, developing effective tank mixes is getting more difficult. Photo by Bruce Barker.

“Having an effective tank mix is not easy to implement. Tank mixing is not an effective herbicide resistant strategy unless you have multiple effective modes of action,” says weed research scientist Breanne Tidemann with Agriculture and Agri-Food Canada in Lacombe, Alta.

Tidemann places emphasis on “effective” and says farmers need to understand what weeds each mode of action can target. She illustrates her point with some examples that point out possible misunderstandings of tank mixing. Active ingredient names are used rather than trade names so as not to pick on a specific product. Tidemann’s examples refer to both pre-packaged and on-farm tank mixing.

The first step is to know the active ingredient and which herbicide groups that the tank mix partners are in. Take for example, a tank mix of pinoxaden plus clodinafop that targets wild oats. Tidemann says it is not an effective tank mix to combat herbicide resistance because both products are Group 1 modes of action. They are separate sub-groups within the Group 1 herbicides (a den and a fop), but still the same mode of action.

Or, swap out the clodinafop for bromoxynil. That’s a multiple mode of action mix, because bromoxynil is a Group 6 herbicide. However, it is not an effective tank mix, because only pinoxaden targets wild oat. Bromoxynil is only registered to control broadleaf weeds.

Cross-resistance makes selection tougher
Try again. Pinoxaden plus pyroxsulam should be an effective tank mix because it has Group 1 and Group 2 modes of action against wild oats. Whether it is effective depends on the resistance status of wild oat on your farm, and the tank mix might not provide wild oat control at all. If you have Group 1 or Group 2 resistance to the subgroups represented, you may only have one effective mode of action. If you have resistance to both modes of action you may not get any wild oat control at all.

Tidemann says farmers will need to dig deeper into herbicide group selection to get effective tank mixes for wild oat control. This can also include herbicide layering, where a soil-residual herbicide is applied in the fall or spring prior to seeding, followed up by an in-crop wild oat herbicide.

Same goes for broadleaf weeds. Take kochia as an example. How about Group 2 pyroxsulam plus Group 4s fluroxypyr plus 2,4-D? The dreaded buzzer again. All kochia on the Prairies are considered resistant to Group 2 active ingredients. The Group 4 fluroxypyr + 2,4-D may still control the kochia if fluroxypyr is applied at 0.243 litres per acre (180g/L formulation), while kochia is not on the
2,4-D label. But, this is not an effective multiple mode of action tank-mix that will help delay herbicide resistance.

Similarly, a mix containing Group 15 carfentrazone plus Group 9 glyphosate applied pre-seed only might be an effective multiple mode of action tank-mix. Carfentrazone is registered at four rates and only the third rate of 29.6 mL per acre or higher will control kochia. And it is also dependent on the kochia being susceptible to glyphosate. Or layering carfentrazone with an effective post-
emergent herbicide would also be a good strategy for delaying herbicide resistance in kochia.

“Triple-resistant kochia to Group 2, 4 and 9 active ingredients have been confirmed across the Prairies,” Tidemann cautions. “Knowing the resistance status determines if it’s an effective multiple mode of action tank mix.”

Finally, figuring out effective multiple modes of action gets even tougher when trying to combine a tank mix for wild oats and broadleaf weeds – many which also have herbicide-resistant populations. In Alberta, for example, there are Group 2 plus 4 resistant cleavers, Group 2 resistant chickweed, hemp-nettle, Russian thistle, stinkweed and wild mustard.

“Getting effective multiple modes of action is not easy, and resistance makes it that much harder. Plus, it is a good practice to rotate herbicides from year to year,” Tidemann says. “It takes time to come up with a strategy, but it’s worth it to keep your products effective for longer and weeds under control.”