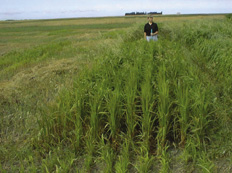 Growers are becoming increasingly aware that they are consumers of the products
that they produce, and that meeting product specifications is an important goal.
Manitoba potato growers have taken this process a step forward, by working closely
with the locally based potato processors, in order to ensure that the quality
of the crops they produce will assist the processors in meeting expectations
of the consumers with respect to fry quality.

One potato producer has gone a step further in attempting to improve the quality
of the potatoes they harvest. Shilo Farms has hired a Certified Crop Adviser
(CCA) to specifically examine their agronomic production practices and to recommend
changes that will further enhance the quality of the potatoes that they produce
for the processing industry.

Susan Molberg previously worked for a supplier of products and services to
many potato producers, with an emphasis on scouting potato crops. In that role,
she gained the reputation of 'being one of the most dedicated agronomists within
the potato industry'. However, she liked the challenge that was offered by working
directly with a producer to improve the quality and quantity of production,
so she happily switched jobs.

Shilo Farms is the largest irrigated farm in Manitoba, consisting of 10,000
acres, of which 70 percent is under pivot irrigation. Wayne DeLong is the farm
manager to whom Molberg reports. Being the lone agronomist, Molberg's responsibilities
cover a broad range of tasks, including nutrient management, insect and disease
management, irrigation scheduling and crop rotation planning for all of the
crops. Other crops grown include rye, wheat, barley, corn and alfalfa.

In terms of potato production, Molberg's main focus has been trying to impact
the 'skin set' or the 'ease of peeling' of potatoes coming out of storage, an
issue that is critical to the processing industry. Potatoes that become 'hard
to peel' during storage create increased discard losses on the trim line, as
well as causing excessive defects in the finished product line.

She suggests that avoiding this quality problem is a very complex issue. A
number of factors appear to be closely intertwined, where one disorder leads
to another, so identifying the culprits becomes a bit of 'chicken or egg' situation.
She indicates that a number of potato diseases appear to be associated with
the onset of the 'hard to peel' potato syndrome. These include silver scurf,
black dot and pinkeye.

Silver scurf is a seedborne fungal disease that can spread quickly in storage.
This fungus survives for only one year in the soil, so allow at least two and
preferably three years between potato crops in a field. Its impact can also
be reduced somewhat by using seed treatments.

Black dot is a relatively new fungal, soilborne potato disease, whose impact
on tubers can be reduced by rotation. Using fungicides to suppress the development
of this disease on potato foliage can indirectly reduce its negative impact
on the quality of tubers coming out of storage.

The symptoms of pinkeye can be observed in freshly harvested potatoes in the
form of slightly raised, light pink areas that are usually located around the
potato eyes. While the pinkish areas disappear quite quickly, during storage
they change into corky areas after four to six months. This disease appears
to be associated with significant levels of verticillium wilt that are present
in the foliage of growing potato crops (typically isolated, wilted or dead stems
that remain upright). Although very costly, soil fumigation will indirectly
reduce the amount of pinkeye.

While the first two diseases can cause potatoes that are 'hard to peel', Molberg
is convinced that the problems in the region are associated with the pinkeye
condition and the existence of verticillium wilt, as well as a surplus of soil
moisture in the latter part of the growing season.

Molberg is going back to the basics in trying to develop a better understanding
of this potato storage issue. She is examining the impact of crop rotations,
irrigation scheduling and the usage of fungicides. She indicates that over-irrigation
during the latter part of the growing season, as tuber growth rates start to
decline, has been implicated as a contributing factor. Wet soil conditions late
in the season when soils are still warm will favour the development of this
disease.

Excess moisture at this growth stage appears to result in the presence of increased
tuber-borne diseases and reduced long-term storability. Compared to the mid-season
peak demand period, water usage can decline by 25 to 40 percent in mid August
and 50 to 60 percent by month end. However, irrigation just prior to harvesting
can be important to help cushion the tubers against bruising during the harvesting
operation.

Molberg indicates that for management of potato storage diseases, it is advisable
to avoid bruising, avoid harvesting when it is cold, hot or wet, and to provide
storage conditions that encourage healing of tuber wounds. These conditions
include maintaining humidity above 90 percent, circulating plenty of fresh air
and maintaining storage temperatures in the range of 50 to 55 degrees F, especially
during the first month of storage.

According to Richard Marsh, a Syngenta technical field manager, "Molberg
is one of the most dedicated agronomists in the potato industry. In her role
at Westman Aerial, she always went the extra mile to serve her customers."
Mark Keller, owner of Keller Farms at Shilo, Manitoba, adds, "She was very
good at field scouting and bringing problems to my attention."

DeLong is very pleased with Molberg's agronomic contributions to the Shilo
Farms operation. He says, "We are very impressed with the improvements
in quality and quantity that she has achieved for us. Our only regret is that
we didn't hire her three years earlier."

There are now over 13,500 Certified Crop Advisers located throughout the US
and Canada. They are advising growers daily on their agronomic production needs.
It is estimated that over 70 percent of these CCAs work for ag-retailers or
a farm co-operative business. They influence their grower clients on their farm
practices and buying decisions by providing relevant agronomic advice as well
as product information.

There are also a growing number of CCAs who work as independent crop advisers
in providing agronomic advice to growers. However, Molberg has taken the CCA
concept a step further by working directly with a grower. In the future, as
farms increase in size and complexity, it is quite possible that more opportunities
will arise for CCAs to work directly for growers.

It is obvious that Molberg's commitment to scouting, her ability to dig up
pertinent agronomic information, as well as her ability to stay on top of the
latest research, were some of the reasons that prompted a grower to hire her
away from an ag-retail/ aerial applicator. -30-