Canadian researchers are part of a major international effort to sequence wheat’s DNA. The knowledge gained through their leading edge project will provide Canadian breeders with the tools to more precisely target key traits and create even better wheat varieties for western Canadian farmers.

CTAG is Canada’s contribution to the International Wheat Genome Sequencing Consortium (IWGSC), an international group working collectively to sequence the wheat genome. The basic knowledge generated from a wheat genome sequence will increase our understanding of the structure and function of wheat’s genetic code.

This basic knowledge has valuable practical applications. According to the Consortium’s website, “By gaining increased understanding of the biology of agronomically important traits and deploying state-of-the-art molecular tools, plant scientists and breeders will be able to accelerate wheat improvement to meet the challenges of the 21st century.”

The project brings together more than 20 researchers from the University of Saskatchewan, the National Research Council Canada, Agriculture and Agri-Food Canada, University of Alberta and the University of Regina. International collaborations with scientists from France, Australia, Germany, India and the United States are contributing to CTAG’s success. The project is receiving funding support from Genome Canada, Genome Prairie, the Saskatchewan Ministry of Agriculture, the Western Grains Research Foundation, the Alberta Crop Industry Development Fund, Alberta Innovates and Viterra.

CTAG, which started in 2011, has three scientific components: generating the first high quality sequence of one of wheat’s chromosomes; carrying out targeted sequencing of Canada’s most important wheat varieties; and developing DNA markers for traits relevant to Canadian wheat breeding programs. CTAG also has a socioeconomic component, which is examining the role of public-private partnerships in wheat genomics and breeding research. This component is led by Dr. Viktoriya Galushko at the University of Regina and Dr. Richard Gray at the University of Saskatchewan.

“One reason is that the wheat genome is big. It’s five times the size of the human genome. One of the wheat chromosomes, chromosome 3B, is bigger than the whole rice genome. The sheer size alone has meant that an international effort is required,” says Pozniak.

“A second reason is that the wheat genome is duplicated. It has three ancestral progenitor species that have come together to make bread wheat.”

So the bread wheat genome is actually made up of three complete genomes, which are referred to as the A, B and D genomes. Each of those genomes has seven chromosomes, making a total of 21 chromosomes in bread wheat.

Pozniak explains how that triple genome adds to the overall complexity: “In many cases when a gene is present on the A genome, there is most likely a corresponding gene on the B genome and a corresponding gene on the D genome. But that doesn’t mean all of them work to generate a phenotype. For example, if you have an effective leaf rust gene on chromosome 1A, the corresponding gene on chromosome 1B may not contribute resistance. In some cases, all three genes might work together to generate a phenotype.” (A phenotype is an individual organism’s observable characteristics, for example, a plant’s height, its resistance to a disease, and so on. The characteristics expressed in the phenotype are influenced by its genetics and by the environment it’s living in.)

The Consortium’s approach to dealing with wheat’s complexity is to sequence individual chromosomes one at a time. The CTAG researchers are working on sequencing of chromosome 1A, in collaboration with researchers from Switzerland and Turkey.

Pozniak notes, “All of the wheat chromosomes contain valuable genes to wheat breeding, but we chose a chromosome that would offer some immediate value to Canadian wheat breeders. Chromosome 1A has several genes of interest. For example, many of the genes that influence dough strength are on 1A. As well, 1A has a number of disease resistance genes that are important to Canadian breeders.”

As well, CTAG is benefiting from the work by other Consortium members. “For example, we have gained access to parts of the sequence from chromosome 3B. That chromosome contains genes that result in expression of solid stems, which in turn provide resistance to the wheat stem sawfly, an important insect pest in parts of Western Canada. We have used the sequence from chromosome 3B to develop DNA markers for that important trait for use in our breeding programs,” notes Pozniak.

A DNA marker is a sequence of DNA associated with a particular trait. Breeders use these markers to quickly screen breeding material in the lab for the desired traits, rather than having to take weeks or months to grow seeds into plants and test them for those traits.

Targeted sequencing
For CTAG’s targeting sequencing component, Pozniak and his colleagues began by working with international researchers to develop a strategy to sequence only the genes in the wheat genome.

“Only 20 per cent of the wheat genome contains genes,” explains Pozniak. The other 80 per cent of the genome is composed of long stretches of repetitive DNA, but researchers don’t yet know what this huge portion of wheat’s DNA does.

Along with honing in on the gene portion of wheat, the CTAG researchers are further targeting this component by focusing on important Canadian wheat varieties. Through this approach, they aim to identify the genes that affect desirable traits in wheat so they can develop DNA markers for those traits.

So far they have sequenced well over 50 wheat varieties. Twenty of those were sequenced as part of CTAG, and the others have been sequenced through related projects that Pozniak is involved in. Another 50 varieties are in the pipeline to be sequenced in the next few months.

However, access to the sequences alone has little practical value to wheat breeding. The next step – and it’s a challenging one – is to figure out where the genes are located and what traits they are associated with.

The CTAG researchers have started the laborious process to determine that. These studies are helping them make progress on several traits. Pozniak says, “For example, scientists at Agriculture and Agri-Food Canada are working on the CTAG project to identify a resistance gene for Ug99, a virulent stem rust race. The same group is also working to understand Lr16, a rust resistance gene on chromosome 2B. Sprouting tolerance is being worked on by at least two groups in the CTAG project. Our group is working on cadmium accumulation in durum wheat and resistance to the wheat stem sawfly. As well, in collaboration with Dr. Curt McCartney at Agriculture and Agri-Food Canada, we are trying to understand and identify DNA markers for resistance to the orange wheat blossom midge.”

Greater genetic gains
Along with continuing its existing activities in the coming year, CTAG will also be working on some of the newer technologies that have come on-stream since the project started – such as genomic selection.

“One newer technology is the utilization of genome sequencing combined with plant breeding. This is referred to as genomic selection, where thousands of DNA markers are assessed simultaneously to select several sections of the genome together. Genomic selection is an emerging breeding methodology that is gaining momentum in several important crops like corn, rice and soybean. However, application of genomic selection in practical breeding programs still requires considerable work and validation,” explains Pozniak.

“Our group is evaluating this genome-wide approach to see how it will work in practical breeding programs. To do that, we first have to develop the technique, the statistics, and validate the mathematical prediction models that we would use as plant breeders to make it all work.” Teketel Haile, a PhD student in Pozniak’s program, is already working to assess the potential of the technology to improve grain yield.

According to Pozniak, genomic technologies are about improving the efficiency of breeding programs, rather than speeding up the breeding process.

“These technologies can help us improve efficiency so the material that we are testing in the field has a better probability of becoming a variety. But we still need to make crosses. We still need to increase the seed. We still need to test it in the field in environments that mimic producers’ fields to ensure that the varieties have the performance expected under field conditions,” explains Pozniak.

“I’m a wheat breeder first and foremost,” he adds. “My number 1 goal is to develop high yielding durum and CPS varieties adapted to Western Canada that mature on time, are resistant to insect and disease pests, and have end-use functionality that is in demand. But I am a proponent of using all available tools at my disposal to achieve this goal. That’s what I really find exciting about genomic technology. It’s about: how do I integrate genomic technology with what I do in the field, with what I do in our quality testing lab, with what we do in our disease nurseries? How do I integrate all of that together in such a way as to develop the best varieties possible for western Canadian farmers? To me that’s what is exciting.” 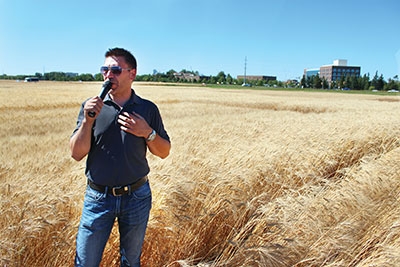