Two hundred winter wheat lines will be put to the test to breed more efficient varieties in the future. 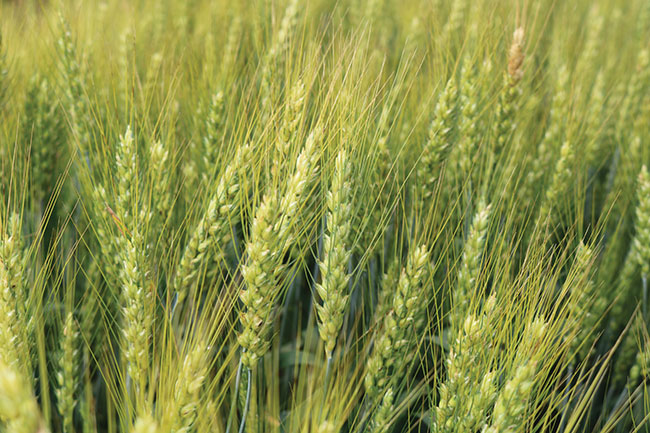 The second stage of the project will study the panel of 200 wheat lines for traits that are associated with superior phosphorus uptake efficiency. Photo by Stephanie Gordon.

A University of Guelph research study is looking into breeding for phosphorus use efficiency (PUE) in winter wheat and is currently starting the second stage of its research.

Phosphorus (P) is the second most limiting nutrient in wheat production and commercial phosphorus fertilizers can be costly. Phosphorus runoff also causes eutrophication of important water sources, such as Lake Erie. All of these facts combined became the motivators for the PUE study.

Kaitlyn Sjonnesen is a graduate student at the University of Guelph currently working on the PUE study. The project’s main goal is to develop tools and strategies for breeding phosphorus use efficiency in winter wheat. By uncovering tools to breed varieties that perform well under phosphorus deficient conditions, the study results can help boost wheat production, reduce input costs, and minimize phosphorus’ impact on the environment.

“There has been relatively little work done in wheat in this area, which is why we are not only aiming to study the genetic basis for traits associated with PUE, but we are studying the heritability of these traits and assessing their feasibility for selection,” Sjonnesen says.

Within the two phosphorus scenarios, Sjonnesen explained they hope to see variation in the performance of the winter wheat lines from winter survival to yield components. An observable difference among wheat lines will allow the team to run a genome wide association study (GWAS) to uncover genetic regions associated with phosphorus use efficiency.

Overall, the experiment hopes to identify wheat lines that perform well in phosphorus deficient conditions. Then, through closer analysis, the team can identify traits that are related to PUE and determine the genetic basis for good PUE.

The study is still in the middle of its first year of field experiments, but there have been some promising observations. “So far, we have evaluated the Elora Research Station field for winter survival and days to heading,” Sjonnesen starts. “No firm analysis has been run yet, but we are excited to see that there is prominent variation in how the lines respond to the phosphorus treatments.”

When comparing winter wheat in terms of winter survival, there was some variation between lines. Sjonnesen shared images of three different winter wheat lines at the University of Guelph’s Wheat Breeding Field Day. In the images, the first wheat line showed good performance in low and adequate P conditions. The first line demonstrates good PUE and had overall good winter survival compared to other lines, so in conclusion, it’s a desirable line.

So while the second winter wheat line could have good PUE (no noticeable difference in performance in low and adequate P conditions), its poor winter survival performance doesn’t make it a desirable line.

The third wheat line showed good survival in adequate P conditions, but poor survival in low P conditions. The considerable difference in performance means the line has poor PUE in the context of winter survival. However, the varied response among lines is good because the variation will help the team detect genomic regions that are responsible for PUE during the GWAS stage of the project.

“More replications are important, especially considering the winter and spring we had.”

“While we’re getting a glimpse of [variation in lines] now, we will have to wait until additional replications are complete before we can draw conclusions,” Sjonnesen says. “More replications are important, especially considering the winter and spring we had.” 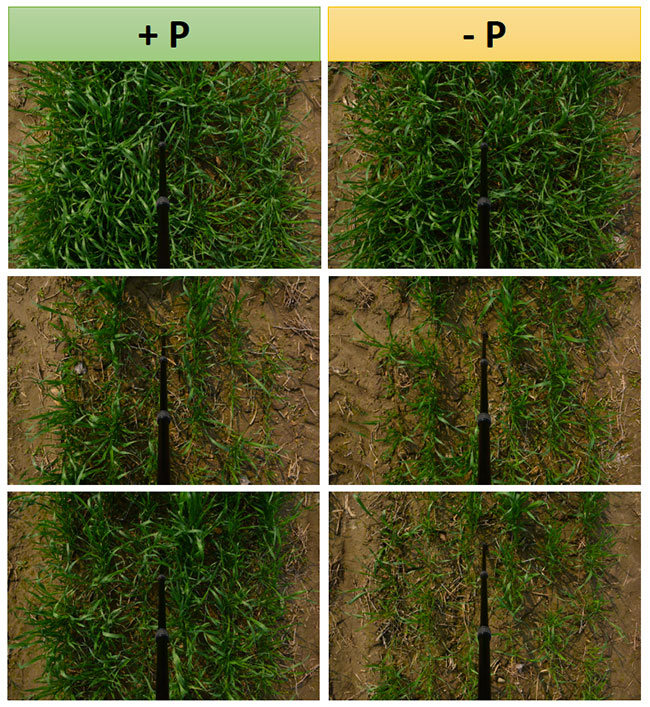 The varied response among wheat lines in +P and -P conditions will help the team better identify genomic regions that are responsible for good phosphorus use efficiency.Photos courtesy of Kaitlyn Sjonnesen.

The second stage of the project

The second stage of the project will study the panel of 200 wheat lines for key root traits that are known to be associated with superior phosphorus uptake efficiency.

“Understandably this is a challenge, especially with imitating field conditions,” Sjonnesen starts. “We are currently working on our protocol to efficiently grow and assess all 200 lines. The traits we are particularly interested in are seminal root growth angle, root hair length and root hair density.” 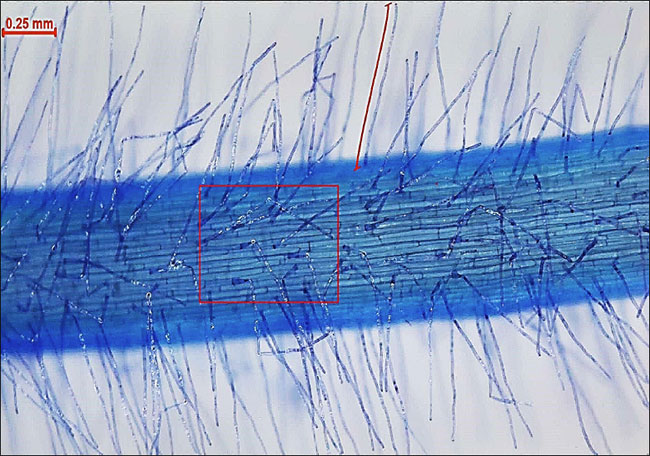 This magnified root image shows the quality and magnification of images that will be used to measure root hair traits.

The team is continuing the study and in the process of running analysis on harvest data collected over the summer. The project team plans to plant another field in Elora, as well as a second location nearby in Belwood, Ont., in the fall. “I’ll be hoping along with anyone else planting winter wheat that we’ll have a more favourable winter than last year,” Sjonnesen adds.

“I’ll be hoping along with anyone else planting winter wheat that we’ll have a more favourable winter than last year,” Sjonnesen adds.

Once the study is completed, breeders can use the results to better breed winter wheat varieties that perform well under phosphorus deficient conditions and have better phosphorus use efficiency.