Features Agronomy Other Crops
What is new in pea, lentil and chickpea varieties?

New varieties are under development and some are being introduced for 2014 and beyond. The following information on Crop Development Centre (CDC) varieties at the University of Saskatchewan comes from Dr. Bunyamin Tar’an, Dr. Bert Vandenberg and Dr. Tom Warkentin, pulse crop plant breeders, courtesy of the Saskatchewan Pulse Growers.

Large green lentil
Seed of CDC Greenstar has entered the rapid multiplication stage. A large quantity of breeder seed was released in 2013 to select growers. CDC Greenstar consistently outyields all other large green lentil varieties and many of the red varieties, similar to CDC Maxim. It has very good ascochyta resistance and better anthracnose resistance ratings than all other large greens. The seed of CDC Greenstar is larger than most of the other green varieties, slightly smaller than CDC Improve (CL).

Other greens and specialty lentils
CDC Asterix is an up and coming extra small green variety with seeds that are about 20 per cent smaller compared to CDC Viceroy. It is a conventional type with some possibility for specialized marketing in specific regions.

In 2014 the CDC plans to release Breeder seed of the conventional French green variety CDC Marble (yield is 119 per cent of Maxim) and possibly 3592-13, a conventional small green (110 per cent of Maxim). CDC Marble outyields all other lentil lines regardless of market class. The CDC is using it to establish a new a higher yielding genetic base for all market classes. All varieties are on track for conversion to imidazolinone (IMI) tolerance.

Red lentils
The CDC estimates that 65 per cent of the 830,000 red lentil acres reported on a variety basis to crop insurance were CDC Maxim (CL). The extra small red varieties – CDC Rosetown, CDC Imperial (CL) and CDC Impala (CL) – are now less than two per cent, in total, of the area. CDC Dazil (CL) and CDC Imaz (CL) appear to be gaining acres.

Conventional varieties like CDC Redcoat, CDC Redcliff, CDC Redbow and CDC Rosebud are grown on a very limited scale right now because they were released after CDC Maxim (CL). As growers try them out, local performance will determine which of these become more widely grown. Several promising new varieties of red lentil are in the multiplication stage.

Yellow peas
CDC Meadow has also been one of the top varieties in Saskatchewan, Alberta, Manitoba and the northern United States.

Certified seed of CDC Hornet became available in 2013; it has good yield (100 per cent of CDC Golden in the south and 105 per cent in the north) with good lodging resistance and medium maturity.

Certified seed of CDC Treasure was available for the first time in 2013; it has good yield (97 per cent of CDC Golden in the south and 109 per cent in the north) with good lodging resistance and early maturity.

Green peas
Certified seed of CDC Raezer should become available in 2014 or 2015; it has good yield in the northern regions, with powdery mildew resistance and nice seed type similar to CDC Striker.

Breeder seed of CDC Limerick was released for the first time in 2012. CDC Limerick has had strong yield performance in Saskatchewan regional trials over the past three years with a mean yield of 105 per cent for CDC Golden in the south and 110 per cent in the north. CDC Limerick has nice seed traits, but with a greater protein concentration than other green or yellow pea varieties. This may provide an advantage in fractionation markets.

Breeder seed of CDC 2472-4 (CDC Greenwater) will be released for the first time in 2014. CDC Greenwater is likely the highest yielding green pea variety in Western Canada at present. It is relatively tall with good lodging resistance and somewhat late maturity, similar to Cooper and CDC Limerick. Seed size is slightly smaller than CDC Striker.

Dun, maple and forage pea
CDC Mosaic is a maple pea variety, which has similar seed type to CDC Acer but with improved lodging resistance. Certified seed of CDC Mosaic should come available in 2014.

Breeder seed of the dun pea variety CDC Dakota was first released in 2010. It was one of the top yielders in the Saskatchewan regional trial in 2010-2013. The dun type would typically be dehulled and sold in human consumption markets in India. Certified seed of CDC Dakota should become available in 2014.

CDC 3012-1LT is a new maple pea variety which has similar seed type to CDC Rocket but with improved yield. Breeder seed is expected to be released for the first time in 2015.

Two new red cotyledon pea varieties were released in 2013, so keep an eye out for this new market class in the years ahead.

Kabuli chickpea
In the past several years CDC Frontier and Amit continued to be the dominating kabuli varieties for the seeded acres. In 2014, it is anticipated ample supply of kabuli varieties CDC Leader and CDC Orion. Both varieties are medium to large seeded (>9 mm diameter) with good yield and slightly earlier maturing than CDC Frontier.

In 2014, breeder seed of a new kabuli variety, 1041-3, will be available to select seed growers. 1041-3 has high yield potential on both Brown and Dark Brown soil zones, comparable to CDC Leader and CDC Frontier. It has fair resistance to ascochyta blight with a long-term score of 4.7 on a 0-9 scale (0 being immune/no symptom and 9 being plants completely blighted). The average seed weight of 1041-3 is 425g/1000 seeds (9-10 mm diameter). On average, 1041-3 matured a few days earlier than the check variety Amit.

Desi chickpea
A limited amount of seed for desi cultivar CDC Consul (formerly known as 603-3) was released to select growers in 2013. CDC Consul has a light tan seed coat colour, which is one of the desirable visual seed characteristics of desi type. The long-term (6-year) yield average of CDC Consul is 110 per cent of the check cultivar (Amit) on both Brown and Dark Brown soil zones. Seed size of CDC Consul on average is 300 g/1000 seeds with a long-term ascochyta score of 4.0. CDC Consul has a medium-late maturity range similar to CDC Vanguard. 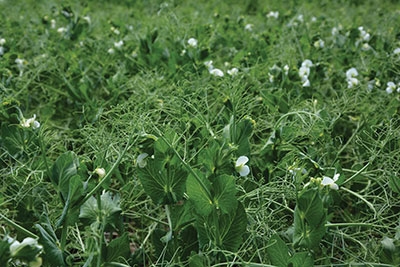 Improvements in agronomics New varieties are under development and some are being introduced for 2014 and beyond.