Ongoing studies in the Prairies reveal that perennial legumes such as alfalfa, a flowering perennial in the pea family Fabaceae, offer significant benefits in rotation.

Martin Entz, a plant sciences specialist at the University of Manitoba, says he and his team have been researching short- and long-term benefits of alfalfa in rotation for decades, and their studies consistently show improvements in soil health, soil drainage and disease resistance.

According to Entz, benefits from the inclusion of alfalfa in rotation have been detected up to 17 years after its removal from the soil. “Having perennial forages in the system even three years out of 10 is a significant benefit,” says Entz. “With perennials you’re putting more carbon in the soil. You can make a difference within 10 years, but the fastest way to do it is to put a legume grass mixture into the soil and supply it with adequate nutrients.”

Alfalfa in particular has positive effects on soil drainage, in part due to its deep taproots, which change soil structure, allowing for better drainage through the creation of macro-pores, Entz explains.

In Manitoba’s Red River Valley area, farmers with alfalfa in their rotations have noticed significant improvements in soil drainage, according to Entz. This is in part due to the fact that perennials use more water, but it’s also due to the impact of alfalfa on soil structure.

Adding alfalfa to the rotation also helps break pest cycles. While the literature examining the specific effects of alfalfa on disease resistance is not extensive, improved disease resistance flows naturally from long crop rotations, says Entz. “Spreading out the years between crops has a huge impact on diseases. Farmers have a choice: they can deal with diseases through good crop rotation, or through fungicides,” he says.

Continuous cropping causes spikes in disease pressure regardless of the crop in question, and monoculture alfalfa will be vulnerable to diseases as would any other crop, says Entz. But long-term rotations that include alfalfa are a good bet for reducing disease pressure.

Entz’ studies also show yield benefits when alfalfa is included in rotation. “Putting perennials in the rotation always gives a yield boost because you can get on the land faster,” he says. “If you’re in a drought situation you may have a little less water in the soil profile after alfalfa than in an annual rotation, and you may have a yield hit. But typically we see a yield increase from alfalfa.

“In our Glenlea (U of M research station) long-term rotation study where we’ve compared yields with and without alfalfa for 20 years, our average yield increase is 5.8 bu/ac, and at 50 per cent as much nitrogen as the non-forage crop,” says Entz. “We’re getting a yield increase at a lower rate of nitrogen fertilizer.”

Entz refers to an eight-year study completed at the Manitoba Zero Tillage Research Farm comparing grain-based rotations with and without alfalfa, harvested with haying or grazing. Economically speaking, the rotations that included alfalfa made as much money as the straight grain systems, but they also had beneficial effects on the land, he says.

Additionally, in pasture-based systems that include perennial legumes such as alfalfa, less fertilizer is necessary. “The problem with haying is that every round bale of hay removes 15 pounds of phosphorus from the land. Unless you bring that manure back to the land, you have to fertilize those hay systems quite significantly. If you harvest that forage with pasturing you don’t have to do nearly as much,” Entz claims.

Alfalfa has always carried a sense of marketing risk, but Entz says adding alfalfa to the rotation – regardless of whether growers move toward integrated crop-livestock systems – offers environmental stability that is beneficial long-term. “The only way that forages make economic sense is if you take a long-term view,” says Entz. “What will the growing market for forage-based ruminant food products look like? If that market expands, we might see the livestock sector change quickly.

“Circumstances may change that will make forages more attractive to farmers. People should be on notice that there are frailties in our system that can be easily fixed with forages in rotation.” 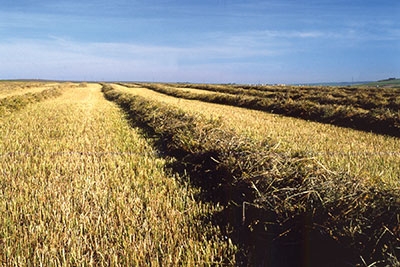