A new manual provides details to construct a biobed. 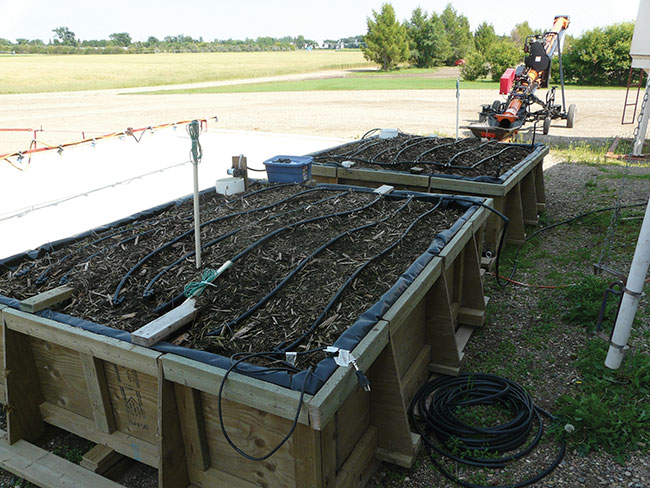 Biobeds can remove up to 98 per cent of pesticides in rinsate. Photos courtersy of Claudia Sheedy.

One of the least favourite parts of pesticide application is sprayer clean out. Typically, farmers rinse the sprayer with water and cleaning agents and then spray the rinsate out on the field that was just completed – three times for best safety. Biobeds are a new and convenient way to prevent pesticide rinsate from entering the environment and contaminating water.

“The main advantage of using a biobed is that the pesticide residues are contained in one location rather than being sprayed out, so we know exactly where they are and where they go,” says Claudia Sheedy, research specialist with Agriculture and Agri-Food Canada (AAFC) in Lethbridge, Alta. “Spills and equipment washings can also be collected and processed rather than contaminating the pesticide handling areas.”

“Spills and equipment washings can also be collected and processed rather than contaminating the pesticide handling areas.”

Biobeds are already popular in Europe, where there are more than 3,000 biobeds in use on farms. Sheedy is part of a group of researchers at AAFC who are proving that biobeds work in Canada.

AAFC currently has five experimental biobeds in Alberta and Saskatchewan. These include two biobeds at AAFC research stations in Lethbridge and Outlook, one municipal biobed in the County of Grande Prairie, one biobed on a private farm in Vegreville, Alta., and one biobed at an Environment and Climate Change Canada (ECCC) site in Simpson, Sask.

“Currently we have tested 175 pesticides, over half of which are herbicides. The biobeds are suitable to handle any pesticide, but the performance in removing each will differ,” Sheedy says.

A biobed is an open tank or a lined pit in the ground filled with a mixture of 50 per cent straw or wood chips, 25 per cent topsoil, and 25 per cent peat. A sloped pad collects rinsate and spills, and drains into a sump. The rinsate is pumped into a holding tank large enough to collect a season’s worth of rinsate. Each day during the spring, summer and fall, about 0.4 inches (one centimetre) per day of rinsate is applied to the biobed.

Pesticides are removed from the rinsate through adsorption to soil particles and organic components in the biobed. Naturally occurring bacteria and fungi also break down pesticides in the biobed.

The rinsate either evaporates or percolates through the biobed. The rinsate that collects at the bottom of the biobed can be used to irrigate grass or shelterbelts. 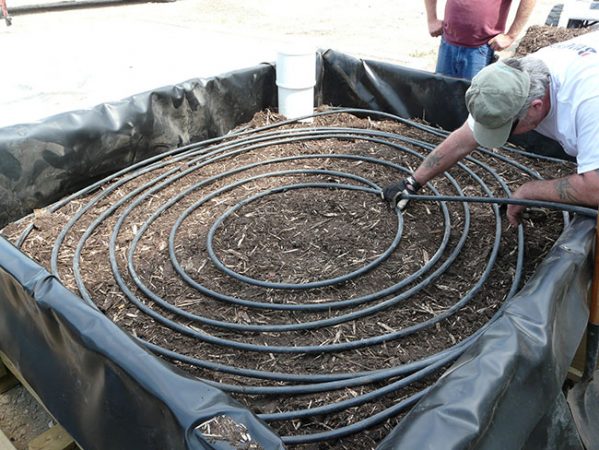 A biobed constructed in Outlook, Sask.

Allan Cessna, a retired research scientist at AAFC in Saskatoon, led a study on the effectiveness of biobeds on the degradation of seven common herbicides in Western Canada. Biobed temperature and duration affected degradation because microbes thrive in a moist and warm (20 C to 30 C) environment. 2,4-D, bromoxynil, and thifensulfuron-methyl dissipated completely during the 35-day incubation at 13 C and 20 C. Other herbicides dissipated more slowly at 20 C; tribenuron-methyl by 93 per cent, pyrasulfotole by 70 per cent, thiencarbazone-methyl by 64 per cent, and metsulfuron-methyl by 34 per cent. At 20 C, the half-lives of all herbicides was less than 70 days.

The research also found that the biobed temperature was less than 20 C for much of the growing season. As a result, construction recommendations for Canada include installing a heat tape or solar heating coil near the bottom of the biobed to provide supplemental heat to speed pesticide dissipation.

Other AAFC research also found that herbicides clopyralid, bentazon and imazethapyr were only removed by up to 60 per cent.

“We are studying this through a variety of projects, hoping to find microbes that can degrade clopyralid more rapidly and efficiently,” Sheedy says.

“I think they are proven in Western Canada, although we are looking at other components of biobeds such as aging, temperature, and ultraviolet light, that could help further increase their performance. Our opinion is that it is better to use a biobed and get rid of a large proportion of the pesticides rather than leave these pesticides out in the environment at large. European studies have hypothesized that up to 70 per cent of pesticide contamination in surface waters could be arising from pesticide rinsate on farms,” Sheedy says.

“Our opinion is that it is better to use a biobed and get rid of a large proportion of the pesticides rather than leave these pesticides out in the environment at large.”

This summer, AAFC is building two biobeds in British Columbia at Summerland and Agassiz research stations, one in Carman, Man., and one in Frelighsburg, Que. There are also plans to build biobeds in Prince Edward Island and at Farming Smarter in Lethbridge, Alta.

Depending on the size of the system and the construction materials used, the cost can range from $6,000 to $23,000, according to AAFC’s construction manual.