Features Agronomy Diseases
Still no fungicide for sclerotinia in sunflowers

Research into fungicidal  control of sclerotinia in sunflowers shows promise, but so far there’s no magic wand to make the disease disappear. 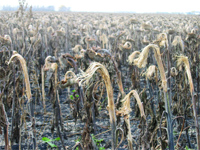 Dr. Khalid Rashid of Agriculture and Agri-Food Canada’s research station at Morden, Manitoba, says they have tried hard for the last five years, testing several fungicides for the control of sclerotinia head rot, but no news, yet. “We have some promising results,” says Rashid. In fact, he is hoping to see
a minor use registration on the fungicide called Lance for the control of sclerotinia head rot in Canada sometime soon.

The AAFC researcher says he has some positive results and documentation from a study done in 2004 when cool, wet conditions were ideal for head rot infections and development.

Quoting from his official publication, Control of Sclerotinia Head Rot in Sunflower, Rashid says the fungicides JAU6476, Benlate and Lance, significantly reduced head rot incidence to 52 to 57 percent, and disease index to 4.5 to 6.1, depending on one to two applications. Ronilan and Quadris reduced the head rot to 60 to 63 percent while Fluazinam, Maxim and Topsin reduced head rot incidence to 60 to 70 percent. All fungicide applications improved yields significantly while reducing sclerotia in harvested seed.

“The grower can protect the crop by spraying every two weeks, without infection, but that’s not economical,” he says. “If you time one or two applications and save 20 or 30 percent of the crop, then it can become economical. What you harvest also becomes cleaner, with better quality and grade.”

In Rashid’s experiments, he applies every fungicide in three treatments: in one plot at early flowering, in another plot at early flowering and 15 days later, and in the third plot only at 15 days after flowering. “I have the combination of an early application, and the late application, or both,” says Rashid. “That’s to see if the fungicide will be effective. If we find it is effective, then either the company has to take the next step of trying to find even better timing, or if we get funding, we can do it ourselves.”

Target between flowering to three weeks after
After five years of experimentation, his research shows the most critical time for infection of sclerotinia is between flowering and three weeks after flowering. This is the peak infection period. Some infections occur a little before and a little after that time. Most of the fungicides lose their effectiveness after two weeks, from rain showers and other weather elements.

“Basically, when you apply a fungicide, it protects those leaves for a couple of weeks. If the fungus is around, it’s not going to stop next week. It will still try to infect those plants. Unless the grower applies every two weeks, he will not keep the crop clean,” says Rashid. “However, by using one or two well-planned applications, he may reduce the disease incidence severity by 50 percent and maybe reduce the yield loss by 40 or 50 percent. Then it can become reasonable, logical and even economical.”

With the absence of any significant sclerotinia infection
in the 2006 sunflower crop, Manitoba growers produced a record crop, showing how important a hot, dry growing season can be to control that disease. Manitoba weather was very hot and dry, perfect for sunflower growth and for low incidence of sclerotinia.

“Normally, the biggest challenge we have with sunflowers of any kind, confectionary or oilseed types, is the control of sclerotinia,” says Rob Park, the manager of industry focus with Manitoba Agriculture, Food and Rural Initiatives at Carman.

Park says the only control a grower has in sunflowers is to stay away from broadleaf crops like edible beans, soybeans and canola in the rotation, for at least two to three years. “Then cross your fingers and hope for dry weather.”

At present, there is no in-crop fungicide option for sunflowers like there is with canola and edible beans to control sclerotinia in sunflowers.

Park says sclerotinia is the limiting factor to the sunflower crop expanding to huge acres and becoming mainstream. Typically, a grower with 2000 acres of farm land grows about 200 acres of sunflowers a year, a manageable amount of sunflower acres that farmers can grow. “The 2000 acre grower suddenly wants to grow 1000 acres of sunflowers; he will have to take some time off from sunflowers down the road because he just can’t control the disease,” he says.

There is good money in sunflowers with records showing it may well be the most consistent long-term profitable crop to grow. There is enough money in it to entice the industry to come up with products that would do that.

“It’s just the sunflower crop itself. Biologically, the crop is so very susceptible to sclerotinia through infection at the roots, or mid-stalk rot. If the weather is right, we can have spores infecting the middle stalk, or right toward the end of the season when plants are flowering or even after flowering, if conditions are right, head rot can set in,” says Park.

Sunflowers tend to be open for business for sclerotinia infection all season long. Whereas canola and edible beans are only open for sclerotinia infection during the flowering period.
Rashid’s trials at Morden show some good results, but the reality from a farmer’s standpoint, and from an economic cost of production, is that spraying more than once may take the economics out of the crop. For good control of sclerotinia, a grower must spray multiple times during the season depending on the weather conditions favouring the disease infection and its development.