But not to supplement lost winter wheat acres. 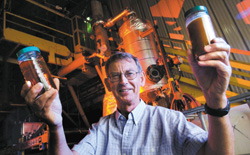 Conventional thinking might suggest that in a year like 2006, when only half
of the expected acres of winter wheat were planted, growers might look to the
spring to supplement some of those lost acres with spring wheat varieties. Yet,
as the 2007 growing season comes into view, there is the understanding that
first and foremost, conventional thinking will have been dispensed in favour
of dealing with the looming reality of changing market demands.

At the outset, corn pricing has thrown a wrench into the traditional way of
thinking as winter turns to spring. Most individuals involved in the spring
wheat trade admit that corn will be the so-called 'golden haired' crop in 2007.
Yet optimism remains that spring wheat acres will see an increase and many growers
will do all they can to maintain their rotations and try to feed an increasingly
lucrative straw market.

From a crop advisory perspective, Peter Johnson believes spring wheat acreage
could reach 200,000, roughly a 50 percent boost compared to the 125,000 to 140,000
acres planted in 2006. He concedes the corn situation will play a huge role
in helping growers decide which crop to plant. At $4.00 per bushel for corn,
some growers will have a tough time penciling out spring wheat, depending on
yield potential and planting opportunities. "Having said that, we're at
$5.50 per bushel on spring wheat," says Johnson, the cereal specialist
for the Ontario Ministry of Agriculture, Food and Rural Affairs. "There's
a bunch of growers that need wheat, just for the place to put manure, and there
are others that really want those acres in a cereal crop from a rotation standpoint."

Interest in frost seeding is on the rise, particularly in the Niagara region,
where tough soil conditions have forced some growers to try different crops
and management systems. One grower that Johnson knows has a 10 year average
yield of 46bu/ac for winter wheat. In 2006, he frost seeded some spring wheat
into some of the toughest clay in the area. "And he got 42bu/ac,"
relates Johnson, adding that some might still view that as a loss. "But
he gets $5.00 or more per bushel instead of $4.00 and the economics on that
spring wheat blew every other crop he grows out of the water. His 30 bushel
soybeans can't compete and his corn can't break 80bu/ac, so he's planning on
a lot more frost-seeded spring wheat in 2007."

No geographic limits, but…
It may not be a ringing endorsement for other regions of the province, but Johnson
maintains there is no real geographic cut-off for spring wheat, whether it is
planted into dry soil or frost seeded. There is, however, a 'drop dead' date
after which growers should not plant spring wheat, and it is very early in high
heat unit areas. Soils in the Middlesex-Oxford corn region that typically yield
180bu/ac are not an option for spring wheat, economically. Yet, depending on
individual grower needs and market opportunities, there may be some growers
in the traditional winter wheat growing regions that may try some acres of spring
wheat.

"If there are ever areas that likely get a big window of opportunity to
frost seed, it's where they don't get a lot of snow, like Essex and Kent counties,
right up to the Snow Belt," says Johnson. He notes that since he began
discussing the frost seeding issue, the Niagara region has yet to see a year
where there has not been an opportunity to frost seed. "Then I get up into
the real spring wheat areas, and some years we get that window and some years
we don't."

If there are limits though, they will reflect more of a market sensitivity
than a grower's comfort level with frost seeding. As corn's price has continued
its march upward ($4.00 per bushel in mid January 2007), more growers are doing
some calculating. "A lot of growers are re-evaluating and putting their
pencil to it," says Marty Vermey, Ontario sales manager for Hyland Seeds
in Blenheim. If growers are going to try spring wheat for the first time this
spring, it comes with only one stipulation: plant as early as possible. "Thinking
that when spring arrives, you'll go out, work the ground and plant wheat at
the same time as corn, just get that thought out of your mind. You'll have to
think about frost seeding and getting it seeded early, and just experiment with
a small acreage. Treat spring wheat seriously and apply the specific management
and time requirements that it needs."

Vermey adds that since corn prices are trending up, growers are better off
matching their management practices with the crop types they are most comfortable
with, trying small plots or acreages of new crops. Spreading the work load during
spring planting and fall harvest will be spring wheat's greatest advantage to
many growers.

Shortfall on springs likely a 'blip'
As for concerns that any shortfall in the supply of wheat, be it winter or spring,
might affect end-use demand or relations with end users that have been building
in the past few years, Vermey does not believe that will be an issue. "Wheat
is traded globally, it's sourced and moved around globally," he says.

Currently, Ontario is still in the process of building the infrastructure to
handle a consistent 800,000 plus acres of wheat, annually, including the various
classes and grades the downstream industries demand. Since that has yet to happen,
any shortfall would be compensated from another region, without necessarily
hurting previous reputations or relationships. "We've done a half million
acres before and we supplied our local markets. I appreciate the work that has
been done to develop markets here in Ontario.

"Fifteen years ago, there was little market for soft red wheat in Ontario
and now it makes up the majority of our acres. More recently, there has been
good advancement in replacing western hard red wheat with Ontario produced hard
red. However, this is a developing relationship with our millers. They have
a better understanding of the production abilities of Ontario wheat producers.
I don't believe they would hold a one-year blip created by weather factors against
Ontario wheat producers or the grain elevator trade," says Vermey.

However, John McLaughlin believes there is still an opportunity to advance
certain wheat classes, despite the conditions in the fall of 2006. It has taken
several years to develop the market for Ontario produced hard red spring wheat
among provincial or regional end users. In the past, the industry has done a
good job on promoting soft red, while hard red was being brought in from western
Canada. Now, says McLauglin, who manages IP wheat and commodity marketing for
C&M Seeds of Palmerston, Ontario, it is time to shift the focus back to hard
red spring wheat.

"Even in the last one or two years, the end users are recognizing that
this is a purchase they should be making, to support Ontario agriculture, yes,
but more important to them is to bring them value," he says. The ultimate
goal for C&M, and arguably any seed company, is to grow the varieties that are
in demand. In the spring of 2007, the issue will be less a matter of the winter
wheat that did not get planted, and more towards producing the right product
for the end user.

McLaughlin concedes to some frustration in building new markets from only one
side of the situation. Growers might expect an end user to be able to see the
value of a crop or a particular variety right away, something McLaughlin thinks
has been accomplished already where hard red wheats are concerned.

"Now it's up to us on the production and delivery side to prove to the
marketplace that we can give them the volume they'll be looking at buying in
the future, and it'll be up to us to make sure the right signals get to the
grower, because the demand is there," he says. -30-