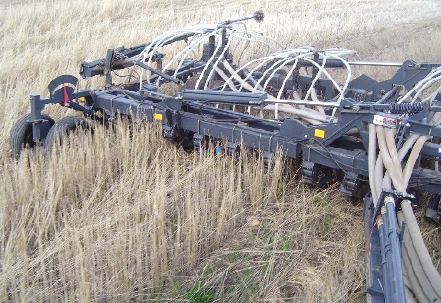 Tall stubble technologies offer a lot of benefits, but also a few challenges. The key components of a tall stubble system are a stripper header for the combine, a disc drill and tall standing stubble. The stripper header removes the heads, leaving all of the crop residue standing in the field. Growers and researchers are convinced of the benefits.

For growers Rex Cunningham of Embryo Seeds near Mannville, Alberta, and Rod Lanier of Never Idle Farms near Lethbridge, Alberta, the key benefits of moving to a stripper header are the time and fuel savings during harvest. “The stripper header leaves the residue where it is, so you don’t bring it into the combine and then spend a lot of energy trying to get it back to where it was,” explains Lanier. “This makes harvest so much faster and fuel efficient, and is why we are keeping the stripper header in our program.”

Both growers use a Shelbourne-Reynolds stripper header. “I don’t think there is a serious competitor at this point, and when you use it for as many crops as we do it isn’t a big investment,” says Lanier.

Lanier grows a range of crops including winter wheat, durum, safflower, peas and flax. He has been using the stripper header for the past six years for most crops, including peas, as long as it is a pretty good crop. “Flax is one of the most interesting crops, as we can combine with the stripper header before the straw would even be possible to harvest with a cutter bar. When the crop turns brown, the seed is about nine percent moisture but the straw is tough and very hard on conventional equipment. However, the stripper header just pops off the heads very quickly and easily, and leaves a great stubble stand behind.”

Cunningham is a certified seed grower and grows wheat, barley, canola, field peas, flax and triticale. After using a disc drill for a few years, he got interested in how a stripper header might fit into his system and purchased a second-hand stripper header in 2006. “The first fall, we realized we didn’t have to do any heavy harrowing because the residue stayed where it was,” says Cunningham. “Over the winter it trapped the snow evenly across the field, eliminating drifts on the adjacent road. In the spring the snow melted as fast if not faster, in the tall stubble as short stubble and we didn’t experience any delays in seeding. We use the stripper header for cereals and flax, but so far not for peas because I want to handle them as gently as possible for seed.”

For Lanier, soil moisture is the biggest limiting factor for production in southern Alberta, so capturing as much snow and moisture as possible is a priority. “The tall stubble captures a lot more snow than standard stubble fields and reduces the wind and evaporation in the field,” says Lanier. “It doesn’t really delay us much in the spring as long as the stubble remains standing, and with the disc drill I can get into the field much sooner than with a hoe system. The tall stubble really protects the new emerging crop from the winds, which can be problematic in southern Alberta.”

The disc drill is a key component of a tall stubble system, and makes seeding in very tall stubble possible. “I use a Flexicoil 6000 with a Barton double-shoot disc opener and 10-inch spacings, and so far haven’t had any problems seeding into tall stubble, even when it reaches 40 inches,” says Cunningham. “Since the straw is anchored by the roots, there isn’t any plugging or hairpinning.”

As a seed grower, Cunningham is unable to use preharvest applications, but discovered that the stripper header also helps with fall weed control. “With wheat for example, the stripper header removes the heads and keeps thistle plants intact other than beating up the tops a bit,” says Cunningham. “This allows me to get good fall perennial weed control with a postharvest application in preparation for seeding in the spring.”

He has not changed his in-crop applications. Lanier is working with the AgTech Centre in Lethbridge to assess how in-crop spray applications penetrate the stubble, and whether or not it gets tied up. “They have suggested a slower speed, so we’ve gone quite wide to 133 feet and reduced our speed a bit.”

Well-planned crop rotations are also important in a tall stubble system, alternating low- and high-residue crops. “Residue from crops like flax and safflower stand up very well, but wheat stubble can sometimes cause problems,” explains Lanier. “We also plan ahead for combining and really control traffic on the fields to keep as much of the stubble standing as possible and reduce our seeding challenges.”

Lanier likes to seed in the direction of the combine tracks, so he decides at harvest which direction he will be seeding in the following spring. He also uses narrow-gauge wheels on the disc drill to minimize how much straw is knocked down. During harvest, trucks are kept on the end, if possible, and other traffic is eliminated.

Another priority is fire. “Unfortunately we lost two units before we figured out that vehicles have to stay out of the field,” adds Lanier. “Diesel vehicles aren’t as bad, but any gas vehicles with the catalytic converter, you’re asking for trouble. Keep the cook vehicle and visitors and salesmen on the road and off the field.”

If a grower is looking for ways to save time and fuel at harvest, along with other benefits, consider low-disturbance seeding systems and tall stubble technologies. Success means planning ahead and selecting the right equipment combination, including a stripper header, a disc drill and tall stubble.

Tall stubble technologies for brown and dark brown soils
Researchers Dr. Herb Cutforth and Dr. Brian McConkey at the Agriculture and Agri-Food Canada (AAFC) Research Centre in Swift Current, Saskatchewan, have been working on the microclimate impacts of tall stubble technologies for the past few years. They took earlier research showing benefits of leaving standing stubble, including an average increase in soil water at seeding by five to 30 millimetres, a step further and looked at the impact of tall cereal stubble on the microclimate at the soil surface at seeding.

Yields were higher for all crops under taller stubble conditions and increased as stubble height increased to at least 45 centimetres (18 inches). The yield benefits were fairly constant across all crop types, including canola, pulses and cereals. Under tall stubble conditions, yields increased by 10 to 15 percent compared to cultivated conditions, and short stubble yields increased by five to seven percent. Canola appears the most responsive to stubble height, and researchers are now looking at the microclimate impacts of tall canola stubble.