The incoming biocontrol can be a game changer for continuous corn growers. 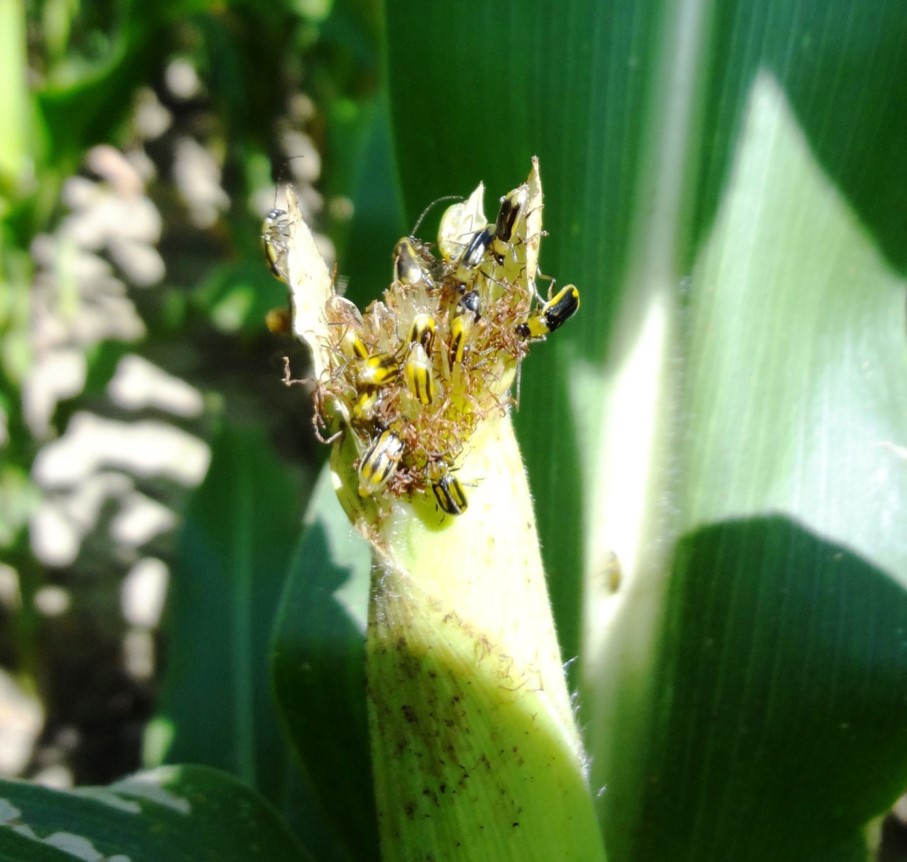 RNA interference (RNAi) takes advantage of a natural, biological process when double-stranded RNA (dsRNA) is introduced to a pest, adjusting the abundance of a target protein, resulting in death or sterility. In other words, it delivers instructions to adjust the production of specific proteins, “much like a dimmer light switch that controls the brightness of the light,” explains John Fietsam, the North America  corn systems lead for Bayer Crop Science.

In pest control, RNAi is used in two ways: plants are genetically modified to express RNAi in their leaves; or RNAi is applied as a topical spray to plants in the field.

Both methods are being, or will soon be, deployed across agricultural industries. RNAi-based pest control technologies are currently in the pipeline for a wide range of agricultural pests, including corn rootworm, Colorado potato beetle, flea beetle and bollworm, as well as nematodes and viruses, and fungal diseases including rusts, mildews and sclerotinia.

In field crops, RNAi-based biocontrols are still years from being registered for Canadian producers. But for some pests, a few years is not too long to wait for another tool in the toolbox.

While the pest only completes one generation per year, eggs are copious and overwinter in the soil. Larvae hatch from eggs in the soil in early June and feed on the roots for up to four weeks; adults feed in July and August on leaves, tassels, pollen and silk. 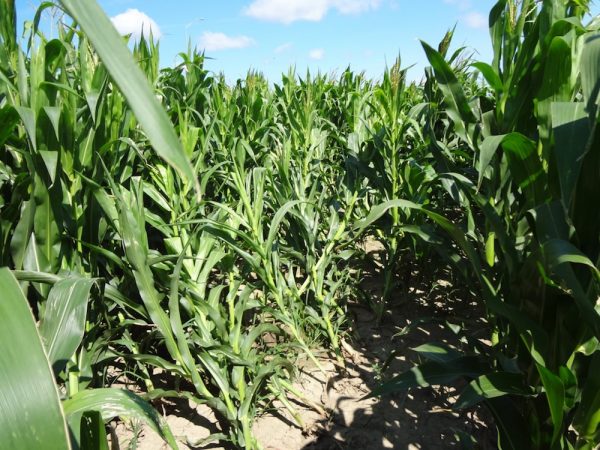 The pest is a problem where continuous corn is grown, according to Jocelyn Smith, a field crop pest management researcher at University of Guelph’s Ridgetown Campus. Crop rotation effectively controls the pest because it cannot survive on crops other than corn; hence larvae die in the spring shortly after hatching.

“I think for the most part in Ontario we do a really good job with crop rotation and that keeps corn rootworm problems at bay. That’s the number one way to control this pest,” Smith says.

But some producers, such as livestock producers working with limited land, still grow continuous corn in the province, and for these producers control is trickier.

Seed treatment insecticides are registered on the pest, but are less effective when there are significant rootworm populations in the field, says Smith. Bt traits that control corn rootworm are available (Agrisure, Genuity, Herculex, Optimum) but single traits can result in resistance when planted multiple years in a row. SmartStax hybrids contain two stacked traits, which presents an advantage in that pests cannot as easily develop resistance, says Smith.

“Corn rootworm has a history of becoming resistant to almost everything we throw at them because of their sheer numbers. They lay a lot of eggs,” she says. “The challenge with the Bt traits for corn rootworm is that they are not high dose, therefore they don’t provide 100 per cent control – so you might have 95 per cent control but that still results in a lot of beetles that can emerge after feeding, and resistance genes can build up.”

RNAi presents a novel mode of action against corn rootworm, and if stacked or “pyramided” with existing Bt traits, will offer added insurance against resistance. 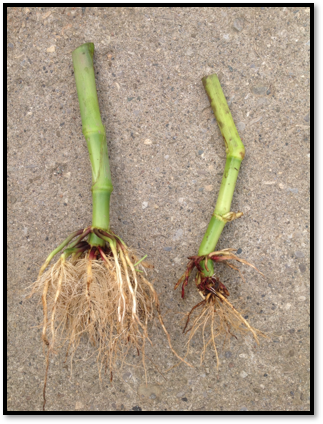 Corn rootworm damage on a Bt variety versus a non-Bt variety. Photo courtesy of Jocelyn Smith.

Bayer Crop Science plans to offer just such a “pyramided” product with the launch of its SmartStax PRO product early next decade, according to Fietsam.

The product will include RNAi technology as well as the two Bt traits already included in SmartStax (Cry3Bb1 and Cry34/34/Ab1), and will offer “the first product with three modes of action for below-ground insect control,” Fietsam says.

The products from both Bayer and Syngenta need to go through risk assessments and other trials necessary to meet regulations on both sides of the border. Bayer’s SmartStax PRO has been approved in Canada.

Below-ground insect pests pose unique challenges for the development of biocontrol agents, different than those for above-ground pests, Davison adds. “One of the important considerations with RNA-based biocontrols for below ground pests is production and formulation solutions that increase soil stability of this novel method of control, and that is one of the focal points for work in this area.”

Fietsam says one challenge derives from the difficulty of applying a dose of soil-applied insecticide in a concentration high enough to offer effective control without negatively impacting the environment.

“The challenges for controlling western corn rootworm with RNAi are similar to those for controlling western corn rootworm with Bt traits, with the approach of delivering a high enough Bt or RNAi (dsRNA) concentration in root tissues throughout the vegetative stage in the plant,” he explains. “To address this challenge, we enabled this trait to be expressed at the desired concentration within corn roots.”

Fietsam clarifies that dsRNA has a different mode of action than Bt proteins, but a viable plan to manage insect resistance to RNAi is still key “given the pest’s demonstrated ability to evolve resistance to different control tactics including chemical insecticides and Bt products,” he says.

He adds that corn hybrids with increased resistance are beneficial to farmers because they add another tool in an integrated pest management (IPM) toolbox, boost yields and may reduce input costs.

Smith says that though her lab does not have data or experience with RNAi corn hybrids yet, she’s optimistic that RNAi may offer promising control down the line.

“I don’t think it’s a silver bullet – it will still need to be used within an IPM approach for rootworm management and we will need to rotate these tools to prevent resistance development,” she says.