Editor’s note: This article is reprinted from Better Crops with Plant Food, with permission of International Plant Nutrition Institute (IPNI), to help inform Canadian farmers of the impact biofuels could have on fertilizer use in North America.

Editor’s note: This article is reprinted from Better Crops with Plant Food, with permission of International Plant Nutrition Institute (IPNI), to help inform Canadian farmers of the impact biofuels could have on fertilizer use in North America.

Nutrient use and management will likely be impacted significantly within the next five years through grain-based ethanol production. Beyond that time period, another round of major impact may occur as cellulosic biofuel production is commercialized. A major challenge to the fertilizer industry and those conducting research on nutrient management will be the development of nutrient management approaches focussed on ecological crop intensification where productivity is increased to meet growing demand and the environment is improved.

Failing to take this challenge seriously will likely lead one day to headlines in the media about the ‘misadventure’ of biofuels and the loss of a tremendous opportunity for agriculture.

“Upon this handful of soil our survival depends. Husband it and it |will grow our food, our fuel and our shelter, and surround us with beauty. Abuse it and the soil will collapse and die, taking man with it.” This quote is attributed to the Sanskrit literature from around 1500 BC (Johnston and Dawson, 2005). It is a clear reminder that agriculture as a source of fuel is far from a new concept. However, the advent of new technology, coupled with a desire to reduce dependence on imported oil, has us in the midst of a modern day agricultural revolution. This ancient quote also reminds us of the importance of resource stewardship as agriculture strives to capitalize on the opportunities biofuels provide.

Intensified interest in yield improvement
The increased demand for corn can be met by either increasing acres or increasing production per acre. Higher crop prices offer incentives for both. This production-encouraging market comes at a time when biotechnology and genetics industries are promising leaps in genetic yield potential with estimates of three percent per year being made by leading biotechnology companies (Fitzgerald, 2006).

Figure 1 shows what a three percent annual rate of increase looks like projected out to 2020 and contains an inset translating the yield increases into additional production relative to 2006. The N, P and K contained in the additional annual production in 2020 amounts to 18, 21 and 13 percent, respectively, of the entire current US fertilizer use (average of 2004 to 2006). 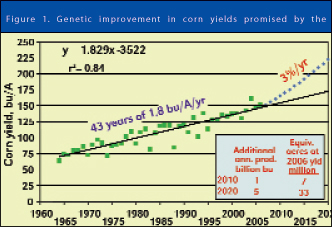 If the genetics industry can deliver on the promised increased genetic potential, and if agronomic researchers, educators, crop advisors and growers can convert that genetic potential into bushels in the bin, then indeed we will be in the midst of a revolution not experienced since the hybridization of corn.

Converting genetic potential into harvestable yield should not be taken for granted. Cropping system changes in plant population, fertilization, pest management, tillage and other cultural practices likely will be necessary on a site-specific basis. The yield drag of increased corn-on-corn acres will need to be overcome. And, it will be critical for sustainability of the resulting modified system that the changes contribute positively to environmental impacts; that nitrate and phosphate losses to surface water and groundwater are reduced, soil erosion and soil loss from the field are lessened, nitrous oxide and ammonia emissions to the atmosphere are reduced, carbon is sequestered in the soil or at least maintained and water is used appropriately. 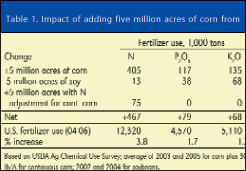 Table 1 gives an estimate of the impact of a five million acre shift of soybeans to corn where use per acre on the new corn area is assumed to be the same as reported in the USDA Ag Chemical Use Survey for the two most recent survey years, plus an additional 30lb/ac N to compensate for loss of a soybean previous crop credit. The fertilizer that would have been applied for soybeans is subtracted from the corn fertilizer.

The estimation also accounts for the increased N rate needed for the additional corn-on-corn acres that show up in the second year of the increased corn acreage. 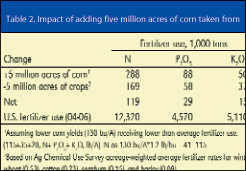 Table 2 shows a second scenario in which five million acres of additional corn results from acreage shifts of crops other than soybeans. It is assumed that these will be lower yielding acres and therefore receive lower fertilizer rates than the acres coming from soybeans. Though enterprise budgets will influence which crops will contribute the acres, in this analysis the contributions are based on available acreage and an acreage-weighted average fertilizer rate calculated to subtract from the fertilizer applied to the new corn acres. Crops contributing acres were wheat, cotton, sorghum and barley. Since the fertilizer rate differences between corn and the crops contributing the corn acres are smaller, the impact of this scenario on fertilizer use is less than when soybeans were contributing the new corn acreage.

Harvest of crop residues and energy crops
The production of ethanol from cellulosic biomass occurs today on a pilot basis only, but progress is being made towards commercialization. If cellulosic ethanol production does become a commercial reality as many experts are predicting, the impact on the fertilizer industry and nutrient cycling could be large, especially for K. Corn stover is expected to be a major initial feedstock due in part to a plentiful
supply, with current sustainable availability estimated at 75 million tons per year (Perlack et al., 2005).

The nutrient content of this stover is difficult to predict due to the wide range in ‘typical’ nutrient concentrations reported in the literature. Nutrient content of stover entering a biorefinery could be more variable due to variation in foliar leaching during crop senescence, extent of weathering in the field, or harvest techniques. For the calculations made in this paper, eight reported ‘typical’ stover nutrient concentrations reported in the literature were averaged as shown in Table 3. Using these figures, the 75 million tons of harvestable corn stover would contain nutrients equivalent to six, five and 23 percent of annual US fertilizer sales of N, P2O5 and K2O, respectively.

Table 4 compares the nutrient removal in grain and stover for a 150bu/ac corn crop (average yield for US for 2005 and 2006). Assuming that on average 40 percent of the stover can be harvested sustainably and maintain soil quality, stover harvest increases nutrient removal by 20, 14 and 110 percent for N, P2O5 and K2O respectively over grain-only harvest.

Thinking in terms of biorefinery capacity helps visualize how a commercial cellulosic industry might get started. Though the bio-energy literature indicates considerable uncertainty in commercial scale details, an 80 million gallon refinery seems to be in the central range of the capacities presented, as does an estimate of 80 gallons of ethanol per dry ton of stover (see Table 5). Therefore, a reasonable estimate of the stover demand for a refinery is a million tons… 10 refineries would require 10 million tons per year or six to seven million acres supplying corn stover.

Once cellulosic ethanol production is commercialized, energy crops such as switchgrass or miscanthus (elephant grass) are bound to enter the scene in short order. These are often described as ‘low input’ species, not requiring fertilization or at most, minimal fertilization (Tilman et al., 2006). However, studies show these species are highly responsive to N fertilization (Muir et al., 2001; Sanderson et al., 2001) and can remove large quantities of nutrients, especially K (see Table 6), though content is extremely variable. Rainfall during leaf senescence can markedly reduce plant K concentration.

At the assumed content of 46lb/t of K2O, 10 million acres of switchgrass yielding eight tonnes per acre would remove a quantity of K equivalent to 36 percent of total current US fertilizer K consumption. However, deep rooted perennial crops often do not receive nutrient applications at removal rates due to the soils they sometimes are grown on, the ability to tap soil nutrient reserves not measured in routine soil tests and grower resistance to application of the large rates involved. Even if the content estimate is off by 50 percent and growers only replace 50 percent of the P and K removed, it is still a lot of nutrients that will be transported from the field to biorefineries.

The question remains of what large nutrient removal by biomass crops and crop residue harvest means to the fertilizer industry. At first glance, it appears to represent a potentially large increase in fertilizer demand following the logic that nutrients are being removed from fields that will eventually need replacement. Yet when one considers the fate of the nutrients being removed, the vision of these removed nutrients as raw material for a new fertilizer source or sources appears. At least some of the N and P moving to biorefineries likely will end up entering the livestock feed industry as is the case with grain-based ethanol production, but the K accumulating will have limited value for that use. It will go somewhere and the likely place is back to production fields, but not necessarily the fields it came from.

It appears it would be wise for the fertilizer industry to further explore with the bio-energy industry the potential for partnerships based on the concept of biomass nutrients as fertilizer co-products. Early discussions, before commercialization, may be beneficial to allow consideration of how processes could be modified to accommodate fertilizer co-product production while also increasing ethanol production efficiency. Brazil learned long ago how to make a fluid fertilizer (venasse) from the nutrients resulting from processing of sugarcane into ethanol. Perhaps there is a corollary with cellulosic ethanol production.

A summary of reference points for the potential impact of biofuels on fertilizer use is offered in Table 7. It considers the March 30 USDA Prospective Plantings Report which indicates that corn plantings are expected to be 10.1 million acres above the 2004 to 2006 average and soybeans and cotton, 7.1 and 2.3 million acres, respectively, below the three year average. This table does not include the impact higher crop prices and accelerated development of crop genetic potential might have on nutrient management across all planted acres which, of course, could be quite large in itself.

The across-the-table impact is likely to be felt on both fertilizer product use
and on the knowledge-based services associated with using those products effectively. Though corn to fertilizer price ratios are not greatly different today than they have been in the past, the economic penalty for over or underestimating need or for nutrient loss is much greater with $4.00 corn/$0.40 N than it was with $2.00 corn/$0.20 N. Economic justification for precision fertilizer application, fertilizer efficiency enhancement, soil testing, plant sampling, soil or plant imaging, on-farm strip trials, omission plots and other forms of decision support is great indeed. Investing in determination of right source, rate, time and place for plant nutrients is a low risk, high potential benefit proposition for both the pocketbook and the environment.

The development and expansion of the biofuels industry may well mark the end of a 25 year era in agriculture… an era that was dominated by the mindset that production is a problem and input reduction is the solution. Perhaps biofuels, and the array of co-product opportunities that are appearing along with it, offer a new mindset where sustainable development of the real potential of modern agriculture to harness the sun’s energy in meeting food, feed, fibre and fuel needs becomes the focus. Such a mindset is ripe with opportunity for agriculture provided the steps taken are not only good business moves, but grounded in science-based sustainable practices leading to efficient and effective nutrient management and resource utilization.