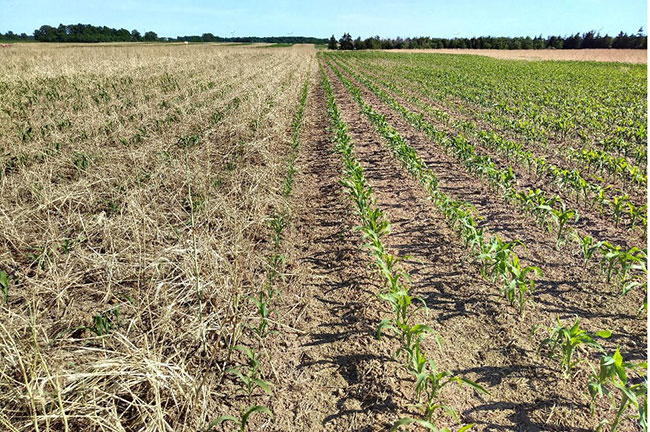 Strip-till with no cover crop (right) on June 17, 2021, compared to a corn field planted into a rye cover crop. Photo courtesy of Jake Munroe.

Cover crops bring several benefits to corn and soybean growers in Ontario.  The first is that cover crops can be used as a weed management tool. An example is from a field where a rye cover crop wasn’t seeded in a small part of a field. Where the cover crop wasn’t established, Canada fleabane escapes were common, while the rest of the soybean field was clean.

Cover crops can also help protect fields from water erosion. They can also improve soil organic matter content, aggregate stability and water quality. Public perception can also be enhanced when cover crops are grown because they are seen as favourable to the environment.

Risk of planting green by crop (cereal rye)
Nitrogen tie-up due to immobilization of nitrate from a rye cover crop may result in lack of N fertility early in the growing season for corn. A solution to this immobilization could be to include a legume like hairy vetch in the overwintering cover crop mix. Another would be to include 30 pounds N per acre or more with the planter, and follow up with the balance of N later in the growing season. Seeding a thinner stand of rye could also reduce the risk, but some of the benefit of weed suppression would be lost. 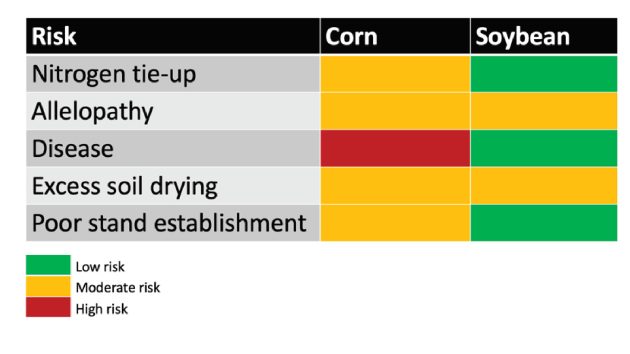 Allelopathy isn’t considered a major factor for large-seed plants like corn and soybean. Cereal rye, winter wheat and triticale are allelopathic, and these allelopathic chemicals can negatively impact the growth of other plants.

Research at Iowa State University looked at the impact of a rye cover crop on corn yield and radicle rot severity. Yield was significantly higher and disease severity lower when no cover crop was grown prior to corn. The timing of termination also impacted disease and yield. Termination at 18 days before planting, and progressing to 12 days after planting led to higher disease and lower yield when termination was delayed.

Research at the University of Guelph led by Drs. Josh Nasielski and Laura Van Eerd with graduate student Farzana Yasmin is looking at bio-strips to minimize allelopathy and disease issues. This involves planting a winterkill species like oilseed radish in the seedrow, with rye or rye/vetch between the rows. Bio-strips help with weed suppression as well. In one trial at Ridgetown in 2021, the no-till corn without cover crop yielded 197 bu/ac, while the bio-strip-till yielded 175 bu/ac, a strip-till treatment with solid seeded rye cover crop yielded 173 bu/ac, and corn seeded into a solid seeded rye cover crop with no-till yielded 163 bu/ac. Cover crop termination was sprayed out around planting.

This trend was evident at other sites, but there still needs to be some tweaks to the system to try to get the cover crop yields higher.

Cover crops can keep the soil cooler and wetter in the spring, but rapid cover crop growth, especially rye, in May can dry the soil profile out quickly. An on-farm trial in 2021 highlight that risk with a side-by-side comparison of a cover crop to no cover crop. Heavy cover crop growth by mid-May resulted in excess soil drying. In the heavy clay soil, the seedbed was dry in the cover crop, resulting in poor seedrow closure and poor germination. The fall-sprayed cover crop strips had good crop emergence compared to the plant-green cover crop strips. At the end of the year, there was about a 20 bushel yield loss with the cover crop.

This example highlights the risk, but the field was also on a challenging heavy clay soil. A more loamy soil might be more forgiving. Timely termination is important if conditions turn dry.

The last risk in stand establishment is a cover crop acting as a ‘green bridge’ for insect pests, especially in corn. If cover crops are left growing until planting, insects can move from the cover crop to the emerging corn crop to continue feeding. This would include black cutworm and armyworm. Corn is more sensitive to stand losses. Soybeans aren’t invincible, but there haven’t been significant issues with stand loss due to insects.

Best practices for stand establishment when planting into cover crops include using a seeder with sharp openers, adequate down pressure, and with the ability to close the slot. Don’t skimp on seed, and use at least 160,000 seeds per acre for soybean depending on your fields and location in Ontario. Also, leave the crop row clear of residue and scout for insect pests.

Successful growers have found some keys to success for planting corn and soybeans into green cover crops. The first is to have patience. Green cover crops keep the soil cooler and may delay seeding. In terms of cover crop species and stand thickness, less is more. When planting, ensure adequate seeding depth for good seed-to-soil contact.

Plant either brown or green. Avoid planting into dying cover crops, as this can cause issues with the planter. Be flexible; every year is different.

In summary, planting green provides benefits and risk. It is easier with soybeans than corn. Know your risk tolerance, and why you want to plant green. Learn from an experienced grower, and start with winter-killed cover crops and early spring termination.