Technology can identify 65 organisms with more to come.

A new piece of technology now available is drastically simplifying the process
of pathogen identification in a variety of settings. The DNA multiscan, based
on protocols originally developed by researchers at Agriculture and Agri-Food
Canada, and distributed through the University of Guelph's Laboratory Services,
is a revolutionary detection tool for growers, advisors, researchers and extension
personnel. The array offers exact identification of disease fungal pathogens
and bacteria, as well as beneficial organisms. There are now 65 fungal species
and 15 bacteria identified within the array, including all species of pythium,
as well as select species of phytophthora, fusarium, sclerotinia and rhizoctonia.

Current laboratory methods for diagnosis of many diseases include gathering
a sample, growing out or 'plating' it in a growth medium, and then physically
identifying the resulting growth. It is time and labour intensive, and does
not always provide a clear indication of the disease in question. "You
get one result back and in many cases, there are limitations to what you can
get out," explains Albert Tenuta, field crop pathologist with the Ontario
Ministry of Agriculture, Food and Rural Affairs. "The isolated organism
may be a minor player and/or non-pathogenic but grows really fast in the lab.
In many cases, disease organisms are some of the ones that grow the slowest
in the lab, so they get overrun by these weedy fungi species, and those results
may be inconclusive or confusing."

With the DNA multiscan, the guesswork is eliminated. Provided the identification
work has been done correctly in the development stage of the assay, a composite
sample of not just the plant tissues, but anything else that is in the root,
for example, can be analyzed. The only limitation would be whether all of the
species of a particular disease have been identified and inputted into the array.
"If you have the ability to isolate 30 phytophthora species and all 30
are in there, you'll be able to detect them," says Tenuta. "You may
only detect five, but it gives you a better understanding of what is inside
that plant and what could be causing the symptoms."

Made in Canada solution
The scope of the technology is incredible. The potential for short-term treatments
for disease, not to mention research and development of resistant varieties
and hybrids is overwhelming. It is commercially available through the University
of Guelph's Laboratory Services as well as Agri-Food Knowledge Solutions (formerly
Agri-Food Labs) in Guelph and Agri-Analysis in Stratford.

Despite the perception of its sudden arrival, the theory behind the system
has been in development since 1998 when Dr. Andre Levesque began his work on
it. At that time, his array was comparatively primitive, with only three pathogens.
"But it still developed, and we showed the concept and showed how it could
be expanded, not quite to infinity, but you could have hundreds of organisms
with the same approach," relates Levesque, a mycologist with AAFC in Ottawa.

The array is being used now in greenhouses with many of the 80 organisms identified
as problems to the fruit and vegetable growers or horticultural producers. "Pythium
is a big problem in greenhouses and we found it a lot in soybeans when we did
a survey a couple of years ago. So now we know that we can look at soybean roots
and find out which pythium species out of the 100 known species are actually
present in that soybean root with a lot of confidence," says Levesque.

The process of identifying disease pathogens from diseases particular to cereals
and corn has already begun. The fact the greenhouse industry became involved
at the outset has helped the process of identifying and inputting new organisms
into the array because it is a year-round industry. "If greenhouse growers
bring in water samples or root samples year round, it really helps the diagnostic
lab to get its feet wet, so to speak, and have an ongoing testing system,"
says Levesque.

He adds the work is being incorporated into the turf industry, and potato viruses
as well, although that work requires some additional adjustments since potato
viruses are RNA-based, not DNA-based. "It would probably be more cost effective
to have an array for soybeans or beans, an array for the greenhouse, one for
turf and so on." 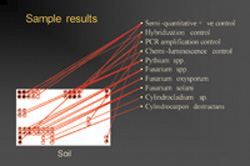 Far reaching potential
Marc Sabourin, who is with Analytical Services at the university's Laboratory
Services, echoes Levesque's enthusiasm for the technology. He adds that its
design allows for testing that has never been possible before. "We can
test the soil, we can test the water, and although people wanted this information,
we just couldn't get it because we couldn't put a test online that could do
it, or it wasn't cost effective," says Sabourin. "This DNA microscan
is cost effective and rapid, and when you start looking at the price of those
tests, you're talking about a few dollars per fungi or per organism that you're
testing for."

With the array developed for the greenhouse, the identification process also
provides the opportunity to test for the effect of beneficial biological controls.
"Growers have been applying biological controls without really knowing
whether they were staying there," says Sabourin. "We're working with
fungi that are used as a protective, where it's an antagonistic fungus against
other organisms, and we can test to make sure they're present."

Producers of growing media are introducing mycorrhyzial fungi to their mix
to help detect the presence of other organisms. "If it's a living organism
and it has DNA, technically, we can detect it with this kind of system,"
says Sabourin.

Market demand now recognized
According to James Altilia, the manager of sales for Laboratory Services, demand
for this technology is growing. The initial drive is to the greenhouse industry
in Ontario as well as customers in British Columbia and Quebec. "We're
going to be working through dealers to get to the marketplace and they'll represent
us and the technology, and work with us by forwarding the samples for testing,"
says Altilia. "The challenge will be getting the growers to understand
the value of this unique service." -30-