Jan. 27, 2016 - Ontario farmers Janet and John Parsons were recently honoured as recipients of the 2015 W.R. Motherwell Award by Canada's Outstanding Young Farmers (OYF) program. The Sturgeon Falls couple have been participating, innovating and promoting the agriculture industry since they bought a dairy farm in 1975.

Janet and John's involvement in OYF began in 1988 when they were selected as honourees for the Central Ontario region, and went on to win the national OYF title that same year, along with farm couples from Quebec and Manitoba. Their support of OYF blossomed after they became alumni of the program.

"The Motherwell Award is presented on behalf of the national OYF program to those who have unselfishly given their time and talents to promote the value of excellence and opportunity within Canadian agriculture," says Luanne Lynn, president of Canada's OYF program. "The Parsons have devoted more than 40 years to the industry at every level and in every way. They are part of an extraordinary group of people that exemplifies what OYF is all about. And the energy and ideas they have contributed, and encouraged in others, has made a lasting impact on our industry. OYF is proud to honour them with the 2015 W.R.Motherwell Award."

Janet and John worked side-by-side on their new dairy farm for five years. When John decided to become a certified general accountant, Janet became managing partner of the farm, operating it for the next 13 years with the help of Leona, her hired hand. After raising three boys, the Parsons have sold their dairy and crop farm to their oldest son James, and provide family support for the business. John continues to operate his accounting practice, working primarily for farm clients. Janet is a certified financial planner, working side-by-side with John once again.

The Parsons continued to support the OYF program after their national win. They produced the national OYF newsletter for five years, and helped establish an early database of members that is still used today. John has been a columnist since 1995, for Farm Business Journal and Ontario Farmer – and has been able to promote OYF alumni and the program through some of his writing. And John served as auditor for Ontario and national OYF program for several years.

Janet has served on several provincial agricultural boards including Farm Products Appeal Tribunal, Agricultural Research Institute of Ontario, Northern Ontario Heritage Fund Corporation and as chair of the Grain Financial Protection Board. John has been general manager of the West Nipissing East Sudbury Agricultural Support Projects – a non-profit corporation that supports large group projects in agriculture in the Districts of Nipissing, Sudbury and Parry Sound.

And their work to advance the agricultural industry continues. Janet and John have twice been awarded Ontario Premier's Awards – in 2007 for spearheading a service arrangement with a John Deere dealership 400 km away to service their remote community, and in 2012 for the development a Field Tracker Pro, an on-the-go crop recording app for farmers that they developed in a joint venture with two of their sons.

On the 25th anniversary of the OYF program, the W.R. Motherwell Award was established. The award is presented annually, on behalf of OYF alumni across Canada, to an individual or couple who has demonstrated excellence in leadership and dedication to both the OYF program and Canadian agriculture.

More information about the OYF W.R. Motherwell Award is available at www.oyfcanada.com under Scholarships. The deadline for nominations for the 2016 award is March 31, 2016.

Celebrating 36 years, Canada's Outstanding Young Farmers' program is an annual competition to recognize farmers that exemplify excellence in their profession and promote the tremendous contribution of agriculture. Open to participants 18 to 39 years of age, making the majority of income from on-farm sources, participants are selected from seven regions across Canada, with two national winners chosen each year. The program is sponsored nationally by CIBC, John Deere, Bayer, and Agriculture and Agri-Food Canada through Growing Forward 2, a federal, provincial, territorial initiative. The national media sponsor is Annex Business Media, and the program is supported nationally by AdFarm, BDO and Farm Management Canada.

Canada's Outstanding Young Farmers for 2016 will be chosen at the National Event in Niagara Falls, Ontario from November 29 – December 4, 2016. 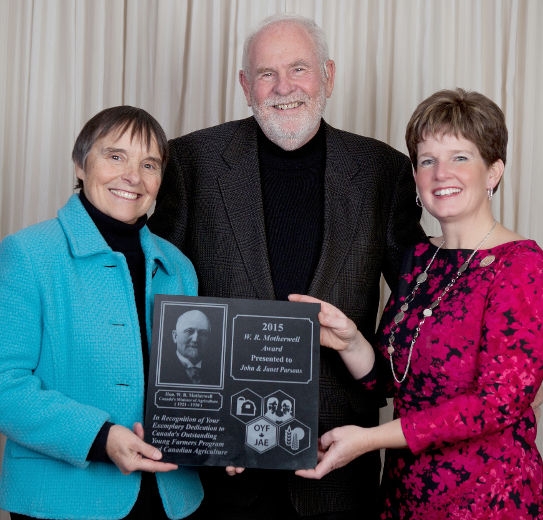