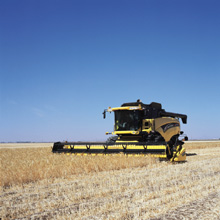 Phosphorus (P) is an important nutrient for crop growth, with early season
availability key to good crop establishment. P is not very mobile in the soil
so having the P close to the plants, either in the seedrow or very close to
the seed, is important because the plant can access it early. Phosphorus is
used to set up the root systems of plants and is a critical component of all
energy transfer in the plant. Without a good supply of P early, plant growth
can be seriously restricted.

"The soils in parts of Australia are very calcareous, with levels of calcium
carbonate of up to 70 percent, which is much more calcareous than our soils,"
explains Grant. "The majority of soils in western Canada are high pH, and
many are calcareous, but these soils are no where near as calcareous as Australia."
In Australia, they were having trouble getting a response from P in the high
calcareous soils because the soil tied up the P so quickly.

"The Australian research showed that by using liquid P they could get
really good responses from P application," says Grant. In the research,
they used both a liquid form and the dry mono-ammonium phosphate ground-up,
dissolved and applied in a liquid form. "The improvement in P availability
was probably because the P dispersion in the liquid helped keep it in an available
form long enough for the plant to access it."

Grant and her research team, Drs. George Clayton, Marcia Monreal, Newton Luwayi,
Kelly Turkington and Debbie McLaren, launched trials at two AAFC locations at
Brandon, Manitoba, and one location at Lacombe, Alberta. They compared liquid
and granular sources of phosphorus in wheat to find out which one performed
better in western Canadian soils. "We also had some farmers express interest
in looking at surface dribble application of P and nitrogen (N), so we also
included the positioning of nutrients as part of the study."

In year two of the study, coated P products were added to the trials. "We
thought that by more slowly releasing the P, by using a polymer coated product,
that the P would stay available long enough in the soil for the plants to take
it up."

The study compared surface dribble applications, seed-placed and side-banded
applications of liquid P. "Seed-placed would be ideal, but there is a potential
for seedling damage with some of the more sensitive crops," explains Grant.
"Side-banding is good and many drills can accommodate side-banding, however,
if the P is placed too far away from the seedrow, then the plant may not get
the P in time. Everything is a bit of a compromise in managing P."

The study also looked at mycorrhizal inoculation to see if mycorrhizae would
have any impact on P uptake in plants. "The inoculants helped with mycorrhizal
colonization, but ultimately we didn't see a benefit to the wheat crop. The
results are still inconclusive, but we're interested in continuing to look at
mycorrhizae in some other crops such as flax, corn and others that are more
mycorrhizae dependent, and may show a different result."

Although the final results of the liquid P trials will not be available until
early 2006, some of the preliminary findings showed that liquid P is a good
source of phosphorus. The results varied from year-to-year, making comparison
somewhat difficult. "Where we had a significant yield response to P, surface
dribble wasn't as good as side-banded or seed-placed applications, because it
was separated from where it needed to be," says Grant. In some site years,
the side-banded liquid P was a bit better than mono-ammonium phosphate. "Although
the response was a bit better with the liquid P, we certainly didn't see the
tremendous benefit they saw in Australia." In other site years, there seemed
to be a benefit from coated mono-ammonium phosphate, so researchers are interested
in comparing longer-term results.

"The weather makes such a huge different in how the P response in the
plant occurs," explains Grant. "If you have a very rapidly growing
plant in warm weather and good soil conditions, then the plant can probably
access enough P from the surrounding soil. However, where we can really get
P responses is in cold years. If you are planting early, and there is anything
restricting root growth or P mobility in the soils, then it is those kinds of
conditions where we see a good response."

The bottom line for growers is to keep with the standard recommendation they
have had for years, which is to place P near the seedrow. That advice seems
to continue to hold up. "Growers will have to crunch the numbers in terms
of cost of product and other economic factors to determine which source is best
for them," says Grant. "Both mono-ammonium phosphate and fluid sources
of P are good available forms of P." Sources such as rock phosphate that
do not provide an available form of P are not going to give the crop what it
needs.

Grant adds that the coated products look interesting, but they do not have
enough data yet to make recommendations. Grant's new research focus has shifted
into a more complicated study that takes a look at tillage systems, type of
preceding crop and the potential impact of mycorrhizae on P availability.

"We will be looking at P availability with coated products, and from different
treatments in soybean and durum wheat. We will also be looking at the impact
of treatments on cadmium concentration in those crops." The results of
this study will be available in the future. -30-