Chris and Harold Perry are fourth-generation operators with a vision of green. The Perry family farm, located in Chin, Alberta, in the Municipal District of Taber and on the border of the County of Lethbridge, is 4000 irrigated acres of mainly potatoes, contracted to Frito Lay and McCain.

“We use significant resources in agriculture – energy, fuel, water, fertilizer. We need to be more accountable for this, for the sake of future generations,” says Chris Perry. “There is definitely a drive for us to be innovative and progressive, at the lead. And I just get excited about the opportunity, about what it can present.”

After years of talking the dream at producer forums and hosting open houses, the Perry brothers discovered that making biomass energy and using data-driven agriculture at the family farm level is far more challenging than they expected.

They incorporated Growtec, which stands for Grow the Energy Circle, as the means to deliver their goal of lessening the environmental footprint of their farm. But poor decisions that at the time seemed like the right choices, overreaching, challenges in funding, and operating in an environment where fossil fuels are the easiest, cheapest route to go have all added up to disappointing delays.

The Perrys had hoped to have their anaerobic digester operating by January 2013, but that hasn’t happened. However, they were successful in implementing data-driven agricultural practices in one field last year.

Anaerobic digester
Turning waste potatoes from their farm along with manure, culled onions and organic waste from the neighbouring area into biofuel for energy to run the family farm went from a $5 million project to a $9 million project. Competing with the same services required by the oil and gas field as well as a desire to design their own system using a technology which is new in this demographic drove the costs up.

“We’re trying to figure out how to make this go. It’s not even economically close to viable where we’re sitting,” says Perry, who took two years off from farming to pursue this initiative. He notes that the engine to run the anaerobic digester has been purchased and is waiting in Rotterdam.

Now, the Perrys are looking to downgrade by embracing a prepackaged “cookie-cutter solution” that uses existing technology.

“We still love the digester because it’s such a nice loop on the farm and that’s why we called it a total energy circle, closing the loop on waste and energy on the farm,” says Perry. As well, the digester would produce fertilizer, which meant the Perry Farm could reduce its use of synthetic fertilizer.

A vice-president of energy/project manager was hired in 2012 to take on this work with the goal of getting the digester in operation in 2014. The provincial and federal grants that had been secured last year had to be returned because the deadline could not be met. Application has been made for a larger CCEMC grant, as well as other grants. Perry hopes the requested funding will cover half the cost of the anaerobic digester, which he feels is required to make the project feasible. He expects to find out in May if the project will go ahead.

Using real-time data
In 2012, the Perry brothers did a trial run with one of their fields, using multi-spectrum images acquired through a variety of sources to determine when they irrigated and when they fertilized.  They used two of the first full-scale variable rate irrigation systems in Canada and drove their nutrient prescription through that technology. While the trial field provided some data, Perry says it was more about testing the equipment and system.

The idea for using real-time sensor networks (such as soil moisture, nutrient levels and other variables) came about following a discussion with Sunrise AG’s Jeff Bronsch. As it stood, the data collected from remote sensing satellites was provided a few days after being collected.

“We said that if we can have this stuff in real time, we can make our decisions based off of that information,” says Perry. Those decisions would drive pivot and fertilizer decisions in the season and could be used to build variable rate irrigation and fertilizer prescriptions.

The Perrys and Bronsch put together a team of scientists, software engineers and sensor experts. The goal was to use a variety of real-time information, such as weather data, nitrogen levels in the upper canopy and carbon dioxide levels, and map the fields using soil analysis to determine the best nutrient prescription to be employed in specific zones.

“What we’re really focusing on is irrigating in season. Having real-time information when we want to go turn on a pivot,” says Perry. “It’s actually what’s happening within that field and that’s the difference.”

Funding last year focused on soil sensors. That work evolved into wanting that information in real time. Perry is hopeful this season will see the work continued at an advanced level. A project manager has been hired and a proposal for funding has gone in to the provincial government, through Alberta Innovates.

“If we are successful with the proposal, then we hope to have a working mobile application mid-season that will need a lot of tweaking, but it will be evolving together and learning,” he says.

Funding issues
Asking for government funding to move both of the Perry projects forward has been difficult for Chris, but he has learned to accept the necessity of looking for dollars outside of his own pocket.

“I’ve really changed my scope in not being scared to ask for funding because you need it. It’s a lot of time and effort and it costs. People can’t understand how much it costs – everything from manpower to risk,” says Perry. “The crop yield lost last year on our trial field trying to get all the application technology in place was significant.”

And that’s why existing government programs, which help producers take on leadership roles while advancing technology and innovation in commercial production, are in place.

“It’s fantastic that we have a government that supports this innovation,” he says.

Many would ask Perry, why do it? After all, aren’t a producer’s days full enough without having to trudge through the endless quagmire of research and development?

The answer is remarkably simple. “It’s always difficult just being on the leading, bleeding edge but we certainly enjoy that aspect of what we do,” he says.

Everybody is watching
Perry is certain that some back room head scratching has been going on as people talk about Growtec and the direction the Perry family farm is headed. “There are a lot of people watching us, wondering how this waste-to-energy process is going to go,” he says, adding that whatever is accomplished on the Perry farm will benefit the industry.

And despite all the setbacks, Perry is confident the family farm is moving in the right direction. “The story is still sound,” he says. “When we talk about all the food-for-fuel debate out there, with the biofuels, and you look at the wind energy and sun, does it really make sense? There’re always a lot of questions. But the one thing that’s sound about this, is the actual waste-energy piece, there is no real hole in the story other than the economics. It’s dealing with waste challenges, it’s reducing the footprint.” 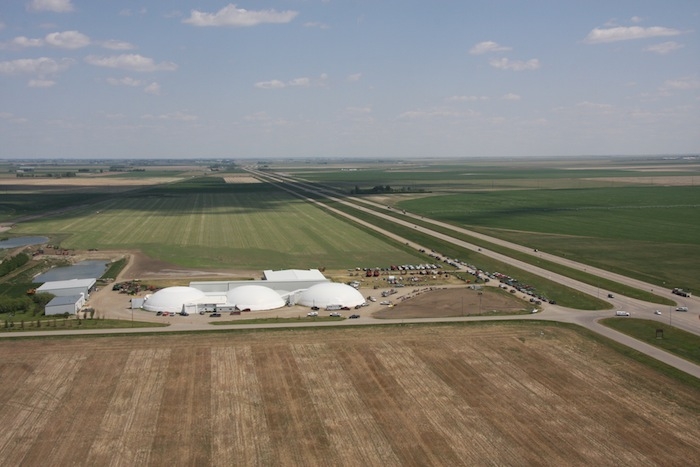 The Perry farm potato domes are part of Grow-tec's renewable energy project. Chris and Harold Perry are fourth-generation operators with a vision of green.