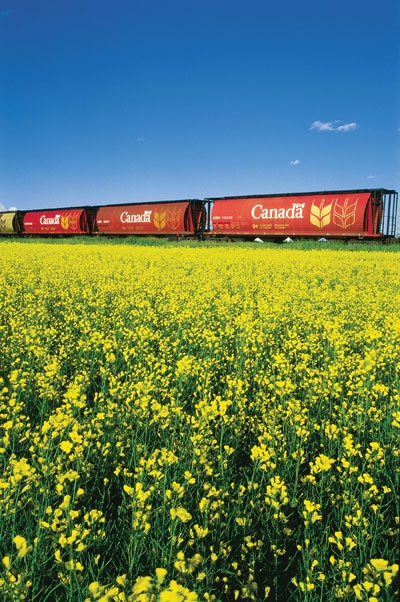 Federal and provincial policies will be a major driving force behind biodiesel economics. Photo courtesy of the Canola Council of Canada. Across Canada

Across Canada, communities and farmers are considering producing their own biodiesel using locally grown crops. With the recent turmoil in the markets, including commodities, the question of economics and profitability is more important than ever. “The first question I always ask when farmers or communities talk about producing their own fuel or creating community based value-added projects is ‘show me the money’,” says Roy Arnott, business development specialist with Manitoba Agriculture, Food and Rural Initiatives (MAFRI) in Killarney. “Understanding the major profitability factors and where they are going is the first step.”

Arnott has developed an economic scenario for a theoretical 10 million litre, community-sized biodiesel plant. “If the price of canola moves $2 per bushel, that will change your profitability by 25 percent.” That means a grower can go from a positive 25 percent return to a negative 25 percent if canola moves above $3 per bushel, which it did in the fall of 2008. By early November 2008, once some of the market chaos of mid-September through October had settled, the opportunities for commercial biodiesel actually looked pretty good. “Declining canola prices and the relatively high current diesel price put a positive profitability for the hypothetical biodiesel plant at 25 percent,” says Arnott. After paying the early November canola price of $8.80 per bushel, the income would be about 25 cents per litre. The break-even price for this theoretical plant would be upwards to $10.50 per bushel for canola. “The 25 cents per litre of profitability is based on 11.5 cents current Manitoba incentive and an estimated 11.8 cents per litre federal incentive,” adds Arnott. “Generally speaking, current biodiesel production is quite reliant on some support from federal and provincial biofuels programs, which vary across Canada.”

For on-farm biodiesel production, the cost of production for canola or soybean crops is the main cost factor, based on production of 50,000 litres per year. Using the Manitoba 2008 Cost of Production Guide, canola costs $273 per acre. “With an average yield of 33 bu/ac, the cost for making your own biodiesel using November 2008 costs will be about two cents per litre less than buying diesel at the pump,” explains Arnott. “However, at yields of 40 bu/ac of canola, you can grow your own biodiesel for about 20 cents per litre less than current pump price.”

For soybeans, the Manitoba 2008 Cost of Production Guide is $266 per acre. “A 24 bu/ac yield is really a break-even situation, and won’t save you any money,” says Arnott. “However, at yields of 30 bu/ac, you can save 80 cents per litre on fuel costs, which is significant.”

That is because the value of soybean meal is much higher than that of canola meal. Therefore, soybeans producers are able to extract more money out of the meal, and the cost of the oil drops significantly. Getting a good price for meal is important for both canola and soybeans, as it impacts the cost of the oil.

Arnott emphasizes that determining break-even costs is very specific to each individual farm, and growers need to carefully assess the profitability using their own unit costs and returns. It is very difficult to try to calculate averages. Whether for on-farm biodiesel or community-scale biodiesel plants, there is definitely some penciling to do. During the last year there were times when on-farm biodiesel production would have been profitable, but other times it was not.

Arnott has been publishing a bi-weekly economic analysis for biodiesel and ethanol for the past several months and sending updates out to industry. He expects to have these updates and various biodiesel budget tools available on the MAFRI website in the future.

Impact of federal biodiesel policy on canola prices and acreage
In May 2008, the federal government passed Bill C-33 to implement Canada’s Renewable Fuel Standard, which requires a five percent renewable content in gasoline by 2010 and a two percent (a standard known as B2) renewable content in diesel and home heating oil by 2012. The longer-term goal is to achieve a minimum of five percent biodiesel in the fuel supply by 2015.
This federal requirement will increase the demand for biodiesel to 800 million litres per year. Researchers at the University of Alberta set out to develop a model to determine the required increase in canola acreage and prices to meet the production demands of this policy. Dr. Jim Unterschultz, associate professor of Rural Economy, and graduate student Susan Robertson also wanted to determine the potential effects for canola growers and the impact on the agriculture industry. “We took the two percent government policy and looked at what it would take to meet that demand on a physical basis, assuming we want to maintain all of the other markets,” explains Unterschultz. In 2007, about 27 million litres of diesel were produced and consumed in Canada. In the future, two percent will have to come from renewable sources.

Unterschultz and Robertson are working on developing a model that would help determine the price premium required to induce enough acres of canola to meet this new demand. “Although we’re still trying to get the model to work properly, some rough calculations suggest there needs to be an increase of between $50 and $70 in canola prices relative to other prices to induce enough acres.” Unterschultz cautions these are very rough calculations, and does not take into account other changes or agronomic issues such as diseases, rotations or others. Robertson is also working on developing a short run land use allocation model, to come up with a reasonable estimate of the shares of annual crops going to various lands.

“Beyond canola prices and acres and to put the policy in context, we asked three broader industry questions about why biodiesel and why from canola,” says Unterschultz. “Depending on which of three questions industry thinks is the most important, we can decide whether or not biodiesel makes sense.” Researchers asked whether biodiesel is to assist with farm income, or to improve rural development or to help the environment and accumulate carbon credits. “Although biodiesel does provide alternatives for farm income and may be good for rural development, depending on economies of scale, the biggest question is whether or not the cost of biodiesel as a policy for reducing greenhouse gas emissions is the most efficient use of public funds,” says Unterschultz. For example, the International Institute of Sustainable Development analyzed the costs of biodiesel in various jurisdictions. In 2006 the EU government support per tonne of CO2-equivalent emission reduced was 600 to 800 euros per tonne.

The current market prices for carbon credit trading in Canada are about $5 to $25 per tonne, plus government subsidies for biodiesel production of up to 30 cents per litre. That translates into a cost of about $100 per tonne or more for CO2 reductions in Canada. Unterschultz believes the question still remains, whether or not the costs and benefits of growing canola for biodiesel outweigh other options, particularly as a greenhouse gas emissions policy.