Features Agronomy Fertility and Nutrients
Can canola benefit from using ‘Nitrogain’ in the side-band?

Fall weather within the Peace River region can often be quite unpredictable. So a few seasons ago, when Wilf Schoorlemmer, who is located at Fairview, Alberta, was unable to get his fall fertilizer applied, he got to thinking about switching to applying all of his seed and fertilizer in a single seeding pass. At that time, Schoorlemmer’s Morris Maxim II air-seeder was equipped with a single shoot, 240 bushel tow-between tank. He realized that he could not apply all of his fertilizer within the seedrow, so he had to make some changes.

After some discussions with Jason Casselman, a CCA agronomist with Cargill located at Fairview, Schoorlemmer developed a strategy for converting his air-seeder to enable him to apply his seed and all of his fertilizer in a single pass. He added a 240 bushel tow-behind cart, which would enable him to apply some of his fertilizer in the side-band position as well as within the seedrow.

Schoorlemmer also switched to using Atom Jet openers that could place the seed and fertilizer in separate bands located approximately one inch apart. He states that, “The fact that the two bands are placed on the same plane appealed to me because there would be less soil disturbance near the seedbed, less drying of the soil and reduced horsepower requirements for getting the crop seeded. This configuration also provided the added advantage that I could really seed a lot more acres between fills.”

Schoorlemmer goes on to explain, “With canola, I wanted to bump up the N to 90 pounds of actual N per acre, but I felt uncomfortable putting down so much N that close to the canola seed, especially since it was located on the same plane.” He discussed the need to provide some protection against the risk of urea-induced germination damage with Casselman and decided that Agrotain treatment of the urea was the answer. Schoorlemmer states, “In the first year, I had Agrotain applied to the urea portion of the 90-20-0-20 blend, with about 20lb/ac of the N coming from ammonium sulphate. I thought that if I could place some of the N within the seedrow, I would therefore be able to extend the intervals between fills.”

Schoorlemmer indicates that for canola, “I used the one compartment of the tow-between seed cart for seed-placed fertilizer and the entire rear cart was used for the fertilizer going down beside the seedrow in a separate band. Percentage wise, it works out to 62 percent of the of the blend going in the side-band and 38 percent going in the seedrow.” Since 20 pounds out of the total 90 pounds of N per acre were supplied by ammonium sulphate, and about four pounds of N was from the phosphate fertilizer, a total of 66lb/ac of the N was supplied as Agrotain treated urea.

This information translates into 25 pounds of the Agrotain treated urea-N being placed within the seedrow and 41lb/ac in the side-band position. Researchers who have evaluated the safety afforded by treating urea with Agrotain, suggest that the seedrow rate used for canola by Schoorlemmer is in the range recommended for his Gray Wooded, heavier textured soils, under favourable seedbed moisture conditions.

According to published guidelines, on lighter textured soils, the rate of Agrotain treated urea should be reduced below the 25lb/ac of N used by Schoorlemmer.

Research supports Schoorlemmer’s fertilizer program
Schoorlemmer treated both the seedrow and side-banded urea with Agrotain. Was there really any need for treating the side-band applied urea with Agrotain? As indicated in Figure 1, research conducted by Dr. Grant at the AAFC station located at Brandon, Manitoba, confirms that when side-banded urea or liquid UAN is located quite close to the seedrow, canola plant stands were significantly improved by using Agrotain. 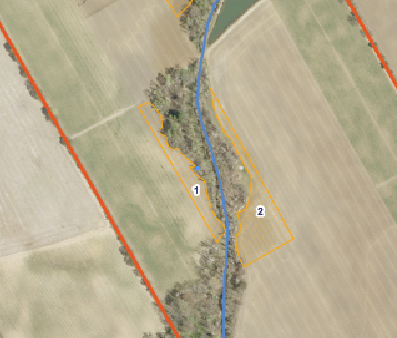 Agrotain/Nitrogain provides seed safety assurance
Schoorlemmer feels very confident about the canola seed safety his current approach provides. “Over the last two years of using this system, my plant stands have never been better and I have not seen any signs of seedling burns or setback. The thing I changed for the second year was to use Nitrogain rather than Agrotain.” He indicates that the assurance Agrotain provides against seedling damage in his canola stands is a critical component of his crop production system. Casselman states that, “I suggested using Nitrogain or Agrotain, since it is like an insurance policy for Schoorlemmer because of the amount of urea he is placing close to the seed.”

Cereals may differ
For his cereal crops, Schoorlemmer only applies 70lb/ac of N as opposed to 90lb/ac for canola. Since cereals will tolerate higher rates of urea-N in, or near, the seedrow, he does not feel that he needs to use either Agrotain or Nitrogain for these two crops. For his cereal crops, the entire fertilizer blend is applied in the side-band position. In a three year study carried out at two different locations, Grant found that the benefits of using Agrotain for barley were not as large, nor as consistent as was the case with canola.

However, using the average data for the 60 and 80 pound rates of N per acre from Grant’s study, the average barley plant stand density was increased by 22 percent and the yield by six to 18 percent as a result of treating the urea with Agrotain.

Risk of mixing seed and fertilizer when seeding faster
A number of prairie canola growers have indicated that they treat their side-band urea with Agrotain in the event they get some inter-mixing of the canola seed with the side-band applied urea blend. This risk can increase substantially as the speed of seeding is increased. These growers have indicated that they feel they need the added protection/insurance that Agrotain or Nitrogain provides in situations where they are pressured to speed up their seeding operation when encountering a shortened seeding season.

Schoorlemmer indicates that currently this is not an issue for him, as he is underpowered and cannot seed any faster than 4.5mph.

Local seedrow N rate trials established
Casselman was also anxious to determine just how much additional N could be applied within the seedrow
for canola when using the Nitrogain form of urea under local conditions. To achieve this assessment, he arranged for local trials evaluating the benefits of seedrow applications at various rates of N, comparing regular urea to Nitrogain urea, using a small plot, single shoot drill. In terms of plant stand density, the Nitrogain showed a significant improvement over regular urea at N rates of 40 and 80 pounds per acre (see photo). Casselman was very excited about these results, but researchers suggest that these trials should be repeated for several years in order to ensure that the promising results achieved in 2007 can be duplicated under a range of climatic conditions. Prairie based researchers caution against expecting to routinely achieve the same degree of canola seed safety that was observed in Casselman’s trials.

Researchers stress following published seedrow N guidelines
Stewart Brandt at the AAFC Research Station located at Scott, Saskatchewan, cautions that under favourable rainfall conditions, it can be very difficult to demonstrate damage from seedrow applied urea because rainfall can quickly move the urea, which is very soluble, away from the seedrow. The risk of damage increases quite dramatically under drier seedbed moisture conditions and the lack of rain following seeding. Brandt therefore strongly suggests following the published guidelines for seedrow application of N in order to avoid the risk of achieving a less than a desirable crop stand. n