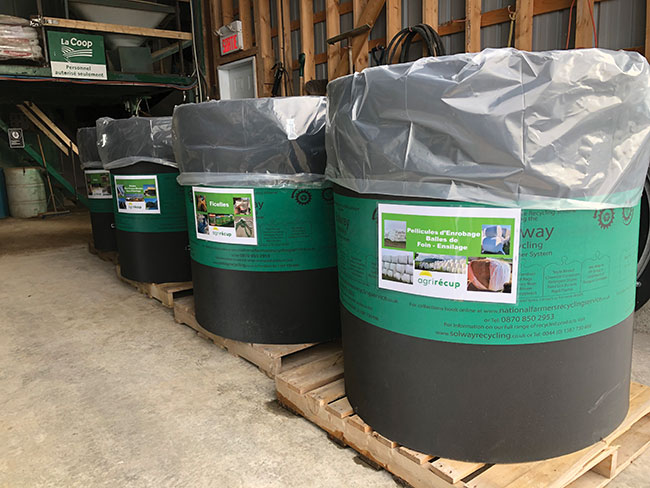 Barrels specially designed for agricultural plastics recovery. Each barrel is used for a different type of plastic. Photos courtesy of Christine Lajeunesse.

Single-use plastics hit the news in June 2019 after the federal government announced a nation-wide ban on some products—but agricultural waste products such as grain bags, pesticide and fertilizer containers, seed containers and bale wrap and twine were not included in the ban, says Barry Friesen, general manager of Cleanfarms, a national non-profit dedicated to environmental stewardship.

Last year, Cleanfarms managed 4,500 tonnes of material across the country, and plastics – including single-use plastics –made up the bulk of this material, writes Friesen on the organization’s website. “It is estimated that 40,000 tonnes of agricultural plastics are used each year in Canada, which means we managed just over 10 per cent of what was generated.”

Though their volumes increase annually across the country, there are few municipal recycling options available for these products, some of which are considered hazardous waste due to chemical or seed residues.

Added to this, most manufacturers of agricultural products are not required to provide end-of-life management plans for packaging. Most of these materials end up in landfills, or are burned or buried, Friesen explains.

Nevertheless, Canadian farmers have more options than ever before for agricultural recycling, and Friesen says there are many positive signs that the industry is poised to make improvements to agricultural waste management.

Last year Cleanfarms saw recovery rates of about 65 per cent across the country on containers, and an overall increase in volume of 14 per cent. Friesen attributes this success to increasing awareness about plastic waste and litter and the organization’s new programming.

“Farmers who weren’t participating in the past are now,” Friesen says. “As we add more programs, farmers say, ‘Now that I recycle this, I may as well do everything.’ A rising tide lifts all boats.”

In Eastern Canada, Cleanfarms’ programing continues to expand, and last year saw an increase in recycling volumes of nearly 10 per cent, Friesen says.

“We’re very cautious about this – one year is a statistic, three years is a trend – but in Quebec the volumes have gone up every year since 2010.”

In Quebec, where programming is newer, Cleanfarms’ programs have seen almost the same levels of return as in Ontario. “We’re very cautious about this – one year is a statistic, three years is a trend – but in Quebec the volumes have gone up every year since 2010.”

The non-profit’s small container recycling program collects fertilizer and pesticide bottles up to 23 litres, including 20-litre pails. Producers bring these containers back to ag retailer locations for collection.

Cleanfarms also offers a bulk container program for single-use containers over 23 litres, which includes pesticide containers and some fertilizer containers.

The third program is the unwanted and obsolete pesticide and animal health collection program, which is offered in every province every three years; this year’s collection in Eastern Canada is in Ontario and Newfoundland. This program collects obsolete pesticides, medications, vials and tubes for disposal via high-temperature incineration. Volumes tend to be small, Friesen says, but these materials are considered hazardous waste and would otherwise be dumped in the landfill.

“The difference in this program versus the container program is that there are a lot more farm dealers in the seed business,” Friesen says. “We don’t have current recycling options for them so we manage them via waste-energy. There’s a lot of crisis in the plastics industry right now, but ideally we want to move our supersacks into plastic recycling facilities.”

“There are fertilizer companies that haven’t signed on but we would encourage them to do so because we can run a more efficient program working together.”

On the crop protection side, agricultural waste management is “pretty well looked after,” Friesen says. But Cleanfarms has identified other gaps. On the animal health side of things, stewardship has a way to go in capturing these materials, he says.

“Some private sector folks are doing collection of bale wrap but nobody is doing twine. This material is being disposed of through on-farm burning or in municipal landfills. This is something that needs to be managed very, very soon.” 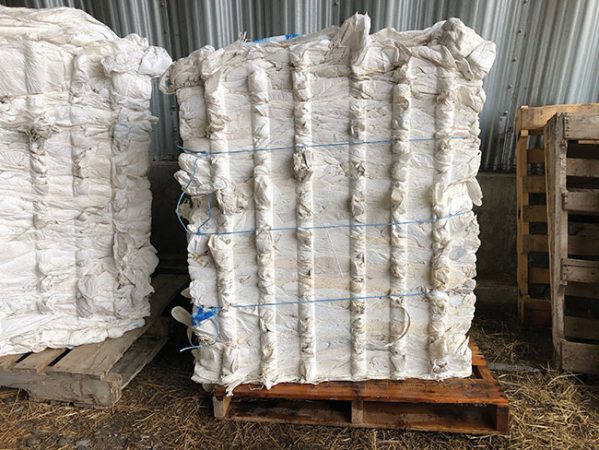 Using a Pack It wooden press, one of the pilot project farmers made almost perfect bales. 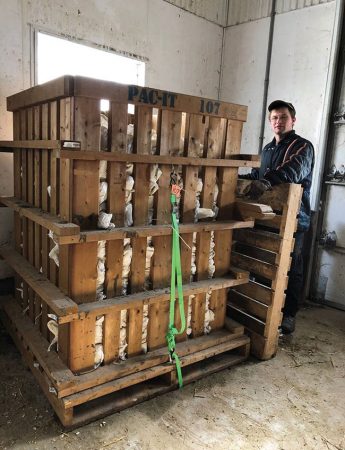 Didier Ruel, one of the pilot project participants, stands next to a Pack It wooden press.

This is one of the reasons Cleanfarms has invested in a new pilot program in the RMC of the Maskoutains in the Saint-Hyacinthe region in Quebec.

The pilot program, a collaborative effort between Cleanfarms, the RMC and the Union of Agricultural Producers in the regions of Maskoutains Valley and North East Maskoutains, aims to measure producers’ attitudes toward recycling, do on-site characterization of plastic types and current disposal methods, and test different collection methods, Lajeunesse says.

New methods being tested in the region include large barrels on-farm or at ag retailers where plastics can be separately disposed of in appropriate barrels, as well as a “Pack It” wooden press developed by an Ontario farmer named Lynn Leavitt that helps farmers to efficiently press and store plastics for collection.

“Farmers in the region currently don’t have an option to recycle their plastics and are eager to have a permanent option,” she says.

But many other municipal regions have also communicated a desire to work with Cleanfarms to manage agricultural waste, she adds.

Friesen counts this as another sign the industry is moving in the right direction. Change is inevitable, he says. “This has to happen –there are literally dozens and dozens of stewardship programs that exist already and they’re coming to agriculture too.”

But it’s a credit to farmers that Cleanfarms’ programs have been so successful, he adds. “I’d like to thank them for their participation,” he says. “We know that farmers are some of the first stewards of the earth and it’s a testament to their tenacity and caring for the environment that we have had a 65 per cent recovery rate in our program. Other voluntary programs, and most regulated programs, don’t get those kinds of results.”

“We know that farmers are some of the first stewards of the earth and it’s a testament to their tenacity and caring for the environment that we have had a 65 per cent recovery rate in our program.”

More programs are coming, Friesen says, and farmers without programs should ask their grower groups to get involved.

“Together we can make sure their farms are clean.”