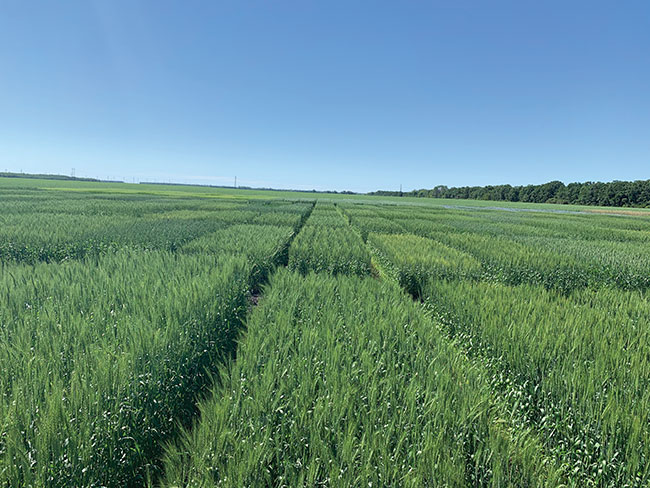 Some plots for the eight wheat varieties grown under four fertilization treatments at Grosse Isle, Man., in 2020, in a study to see how agricultural practices affect free asparagine levels. Photo courtesy of Susane Trevisan.

A multidisciplinary team of Canadian researchers is tackling a growing issue for the wheat industry: free asparagine. This naturally occurring amino acid is a key contributor to grain protein; however, asparagine that remains in the grain as a free amino acid – rather than bound up in the protein – looks to be the trigger for a potential food safety risk. The team’s goal is to help ensure Canadian wheat growers can produce top quality, safe wheat that competes successfully in the marketplace.

“Asparagine is an amino acid that plants generate. It is important for transporting nitrogen around the plant. Generally that free asparagine gets converted into protein in the wheat grain. The trouble is that the grain will also have a pool of some amount of free asparagine as the amino acid. When flour from the grain is baked into bread or cookies, for example, the high baking temperatures tend to cause a reaction between the free asparagine and sugars in the dough, which then forms acrylamide,” explains Martin Scanlon, a food scientist at the University of Manitoba who is leading this research.

Acrylamide has been shown to cause cancer in lab animals and is considered to be a potential carcinogen for humans. Acrylamide is not only an issue for wheat products. It can form in various other plant-based foods that contain asparagine and that are processed at high temperatures, such as potato chips, coffee and roasted almonds.

“Although acrylamide levels are low overall, the potential health risk has caused acrylamide and things such as asparagine to come under a lot of scrutiny from the European Food Safety Authority,” Scanlon says. “As recently as November 2019, the European Commission stated that all food business operators need to monitor the amount of acrylamide in their foods and to look at what measures might be taken in their whole supply chain to reduce the risk of acrylamide formation.”

So, Scanlon and his team are determining the current levels of free asparagine in Canadian wheat varieties and identifying effective ways to reduce these levels.

His main collaborators on this research are: Lovemore Malunga and Nancy Ames with Agriculture and Agri-Food Canada (AAFC) in Winnipeg; Elaine Sopiwnyk at the Canadian International Grains Institute (Cigi); John Waterer with Paterson Grain; Richard Cuthbert with AAFC in Swift Current; and Belay Ayele at the University of Manitoba. Day-to-day research activities are led by Ali Salimi Khorshidi at the University of Manitoba, but many other collaborators and research personnel are also involved.

This research is funded by the Governments of Manitoba and Canada through the Canadian Agricultural Partnership program in partnership with: Manitoba Wheat and Barley Growers Association, Saskatchewan Wheat Development Commission, Alberta Wheat Commission, Warburtons, FP Genetics, SeCan, and the Natural Sciences and Engineering Research Council of Canada.

A first look at Canadian wheats
“Absolutely nothing was known about the free asparagine levels in Canadian wheat varieties before this research was initiated in 2018,” notes Scanlon, who is dean of the university’s faculty of agricultural and food sciences and a professor in the department of food and human nutritional sciences.

“There had been no studies in Canadian wheats. The closest information was a North Dakota study in 2017 that included varieties like Glenn that are also grown in Canada.”

So, as a first step, Malunga, Ames and Scanlon and their labs assessed the free asparagine concentrations in the wholemeal and white flour milled from 30 Canadian red spring wheat varieties. Cuthbert, a wheat breeder, provided the varieties.

Agricultural effects
The project’s study on agricultural practices is evaluating the effects of wheat variety, growing location and fertilizer applications, three factors that are thought to influence free asparagine levels, based on research in other countries.

The eight varieties included in this study are mainly commercial lines of interest to Warburtons, a major British baking company and an important buyer of Canadian wheat. Six of the varieties are in the Canada Western Red Spring (CWRS) class (CDC Plentiful, AAC Brandon, AAC Cameron, AAC Starbuck, AAC Elie, Glenn), one is a Canada Prairie Spring Red variety (SY Rowyn), and one is a Canada Northern Hard Red variety (Prosper).

The varieties are grown at two Manitoba locations each year: Carberry (2018), Grosse Isle (2019, 2020), and Lilyfield (all three years). The plots are also comparing two nitrogen fertilizer rates (100 or 135 kilograms per hectare) combined with two sulphur rates (zero or 17 kilograms per hectare). These trials were designed in consultation with Adam Dyck of Warburtons, Waterer at Paterson Grain and Kevin Baron of Solum Valley Biosciences. Waterer’s group is managing the plots.

Graduate student Yi Xie has analyzed the wholemeal flour samples from the 2018 and 2019 plots, and she and the rest of the research team have submitted a paper on the results to a major cereal science journal.

The most significant factor influencing free asparagine levels was the growing location and year. “The growing conditions in the year had a big effect, more than was seen in the North Dakota study.”

The effect of variety was also significant. “Some varieties tended to have similar levels from year to year and site to site. For example, at both sites in both years, Glenn tended to have low amounts of free asparagine; that was also seen in the North Dakota study,” he notes. “But other varieties had asparagine levels that were all over the map, from very low to very high.”

Nitrogen fertilizer rates had a small impact, with higher rates tending to result in higher concentrations of free asparagine. Sulphur as a nutrient was not a significant factor, but soils at all locations were far from being sulphur-deficient. 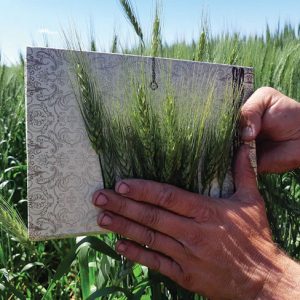 Kevin Baron, a collaborator on the project, examines spikes of AAC Brandon, one of the eight varieties in the study. Photo courtesy of Ali Salimi Khorshidi. 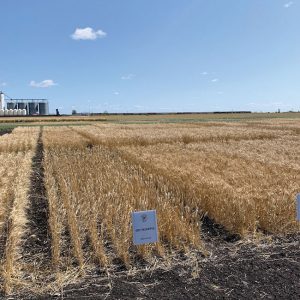 CDC Plentiful, another of the eight varieties, at the Lilyfield, Man., site in August 2019. Photo courtesy of Susane Trevisan. 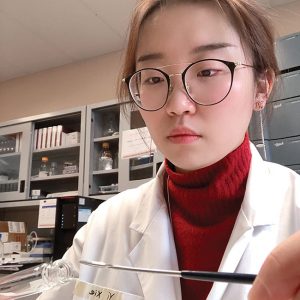 Breeding strategies
One part of the project’s breeding-related component is to provide information to Cuthbert to help in selecting crosses for creating new varieties with low free asparagine potential. That information includes the data from the initial study on 30 varieties, the current study on eight varieties, and additional studies on lines provided by Cuthbert that have been grown at various locations in Saskatchewan.

Using four of the project’s eight varieties, grown at two locations, they are determining if there is a relationship between the level of expression of the different genes when the plant is depositing protein into the developing grain and the amount of free asparagine that ends up in the harvested grain.

Scanlon explains, “From a breeding perspective, you can look at where those genes are located on the chromosomes and try to manipulate your crosses to either increase the amount of an enzyme that breaks down asparagine, or reduce the amount of an asparagine synthetase that may be contributing to free asparagine in the grain.”

Breadmaking quality
The project’s third component is looking at whether strategies to reduce asparagine levels might have unintended consequences for breadmaking quality. This study involves making dough from the white flour milled from the grain samples grown at the field sites, and then assessing the dough’s quality characteristics like elasticity and strength.

Due to COVID-19 closures of the food analysis labs at Cigi and AAFC, only some of the samples from 2018 and 2019 have been evaluated so far.

The preliminary results suggest that lower free asparagine levels are better for breadmaking, as well as being better for food safety. So if these results hold true, it would be a win-win outcome.

Looking ahead
The project team has a lot on its plate for the coming months. In part, they hope to catch up from the COVID-related delays.

For instance, they want to examine the relationship between the free asparagine levels in the wholemeal flour samples and the acrylamide levels in the bread from that flour. “Over the last two years, we have baked bread from the eight varieties at the two sites, but the analysis of that bread has been sideswiped by the COVID lab closures,” Scanlon says. “We want to see if there are differences between free asparagine conversion into acrylamide in Canadian breadmaking varieties compared with varieties grown in other regions.”

They also want to complete the dough quality analysis, and they will be analyzing all the grain samples from the 2020 fieldwork.

In addition, they are planning to evaluate grain samples from some other field trials conducted by Paterson Grain. These extra trials involve applying a portion of the nitrogen fertilizer later in the growing season to see how that affects the grain’s protein and free asparagine levels.

“And from a market access viewpoint, this research could enable major buyers of our wheat, like Warburtons, to show the European Food Safety Authority what they are doing to reduce the risk of acrylamide formation in their products through monitoring and controlling the amount of free asparagine in one of their primary sources of wheat.

“When you put all that together, it becomes a good news story for Canadian wheat growers.”